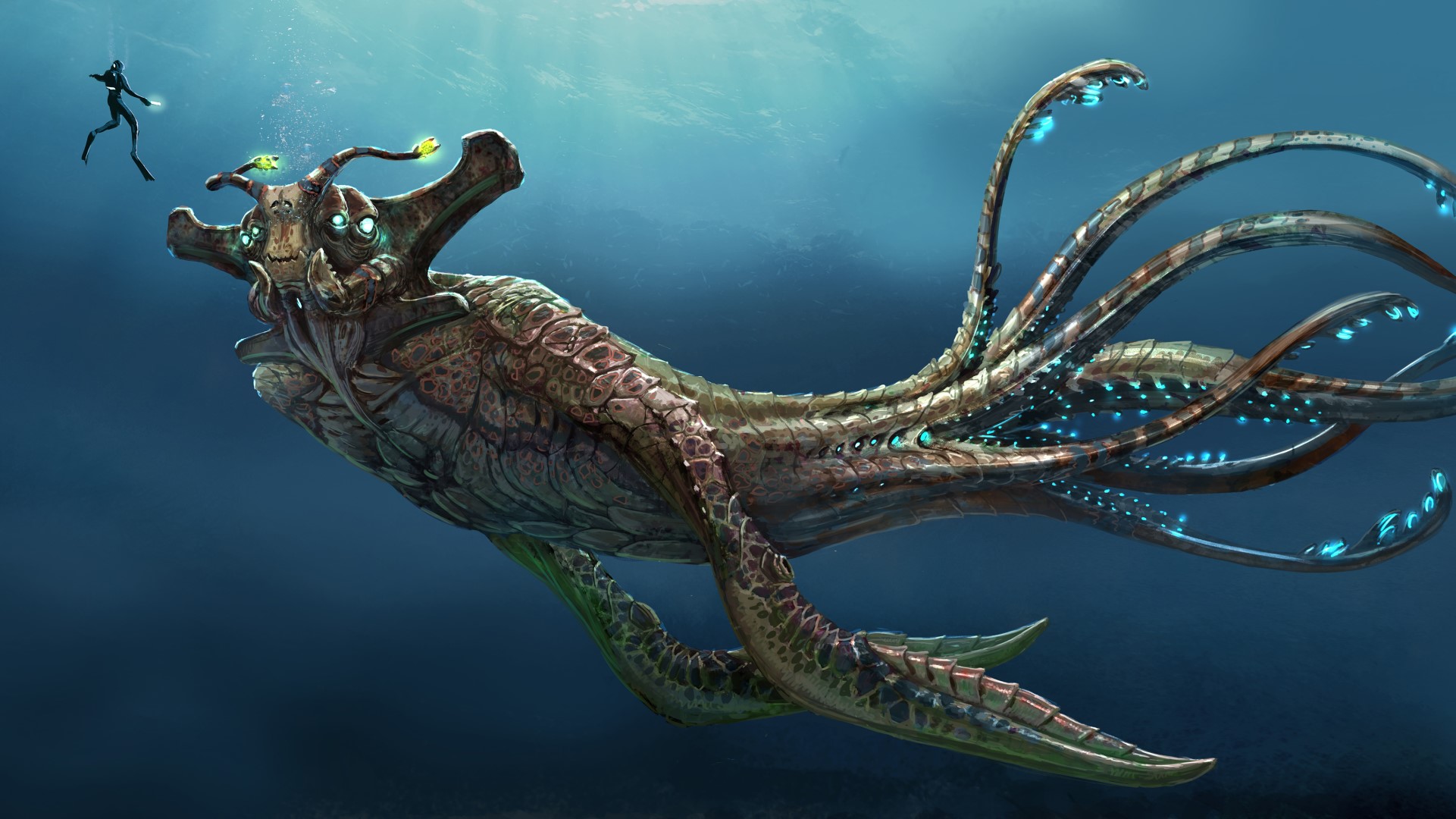 It Should Be A Movie – Subnautica

I’ve got an itch for something nautical. With the release of Underwater, I’m reminded of the abject terror of the depths. It’s a unique horror; the oceans are the last place on earth of which remain a mystery, an infinite pitch-black void with some of the most hostile living conditions imaginable. The ocean not only feels like the black maw of the abyss, it also gives a sense of intense claustrophobia. And so to get ready for the movie with a bit of the ocean madness, I returned to one of my favorite games, Subnautica.

Subnautica takes place in the ocean of an alien world, where you the player are the sole survivor of a crashed starship, the Aurora. It’s a survival game, where you need to go out and hunt for food while collecting as many bits of garbage as possible in order to assemble them into equipment and shelter. But the best bits of garbage are close to the Aurora, and that means you need to leave the shallows and go off into deeper waters. As you travel farther from the start, the cute fish become larger and more aggressive, and as a person without any weapons or means of defending yourself, you realize you’re a small fish in a big pond.

Subnautica may have accidentally become one of the best horror experiences on the market. On its surface (ha) it doesn’t appear to be a scary game. The shallow waters where you begin are a tranquil coral reef. The fish are cute and cartoonish, the colors vibrant, and it’s reminiscent of other zen swimming games like Endless Ocean. Subnautica looks closer to Finding Nemo than it does Underwater. But that stark contrast makes the horror elements all the more intense.

The deep waters are where the real terror sets in. You feel a true sense of vulnerability as you slowly navigate the seafloor, careful not to attract the attention of whatever is nearby. Occasionally you’ll hear the roar of some kind of leviathan, and begin frantically looking around so fast that in the game the character would have snapped their own neck. There’s really nowhere to hide in most places. More than a few of the times I’ve played I ended up gazing down a leviathan’s jaws, and them grabbing me as I desperately flee hasn’t gotten any less terrifying than the first time. I’ve played a lot of horror games, but for some reason, the deep waters of Subnautica do it for me better than most. I think this is one of the few unique game settings that would make for a great film.

A Subnautica movie could follow the game’s narrative, about a single marooned survivor who needs to enter the deep waters to survive and also maybe caught some sort of alien flu. Or it could have a huge cast of explorers facing these terrors of the deep with the classic crew-going-nuts-and-turning-on-each-other trope while in a submarine. Atlantis: The Lost Empire, but super dark. Really, the setting of Subnautica is already so interesting that the story could be anything. Any great filmmaker could add any story to the setting and it would be great.

If I had to choose a director, I’d go with Guillermo del Toro. Del Toro is a master of every genre he’s worked on. He’s not only proven that he can make a great horror experience, but he’s also done very well with animated films, most recently The Book of Life. And as we’ve seen in The Shape of Water, del Toro also makes a great movie about weird sea creatures. There are so many cool nautical themes he could explore. Del Toro could go with the already terrifying aspect of being turned to goo by 1000 atmospheres of pressure, or with the weird volkswagen sized squids that stalk you around. Or an animated Life Aquatic where the shark kills everyone. I’m here for it.

Hell it doesn’t even need to be the exact setting of Subnautica, I’d be absolutely down with any horror movie with the aesthetic of Moana. Vibrant color makes the terror that much more terrifying, and I really wish Hollywood would realize this. Not every horror movie needs a dark grey filter while taking place in some grimey hallway or house. A lot of movies in this genre have stagnated, and I think a new style could breathe some life into an overcrowded market. And since I’ve been drinking seawater all day and have a bad case of ocean delirium to pregame for Underwater, I’m in the mood for one in the depths.

Animated horror is already an untapped market. Sure, there are a few that look like they were made on a PS2 (looking at you Night of the Living Dead: Darkest Dawn), but none have really tried anything beyond “doing the exact same thing before but now it looks shitty.” The colorful setting and style of Subnautica makes for a great contrast to the terror of being stranded above the abyss. Horror movies typically stray away from bright colors, which is why films like Midsommar are so unsettling. Mix that with charming animation and that contrast becomes even deeper. Right now the only comparable example to this would be Coraline, an extremely popular film. Mixing terror and colorful animation goes against everything horror filmmakers are taught, and to harness this deep contrast between them will absolutely amplify the effects of both.