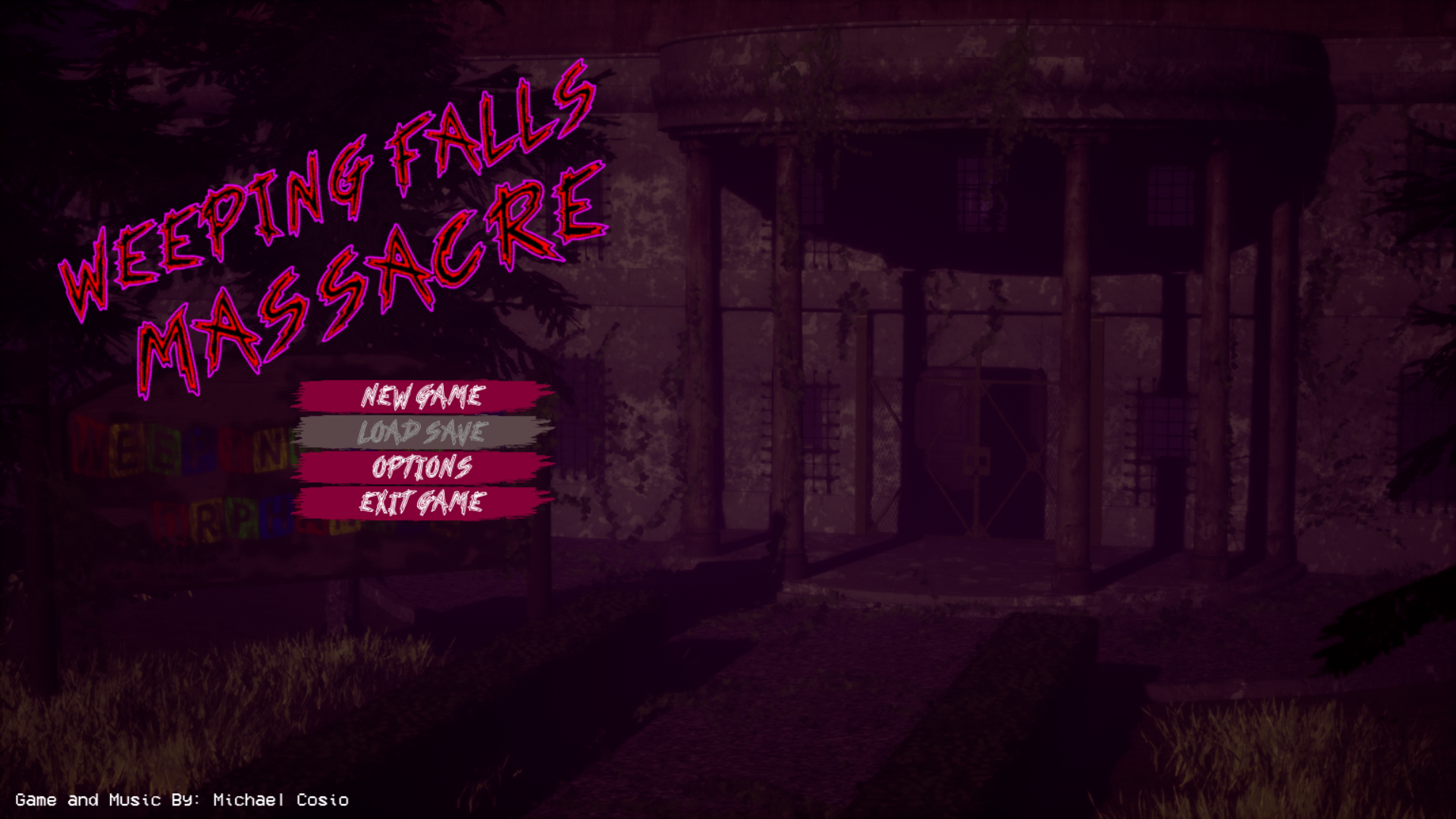 Weeping Falls Massacre: Don’t Take Your Eye Off The Prize

While spending my week in bed due to excruciating pain from a kidney stone making its way through my body, I wanted to try and find something to do to take my mind off the awful thought of passing this son of a bitch. So like any sane person, I took to Steam and Itch.io.

Mentioning a mysterious incident at an orphanage over a decade ago, feeling guilty that he was adopted and not Kyle. Eric decides to head to the orphanage to find out what really happened all those years ago.

After suiting up with your flashlight and backpack and getting changed out the door, we go off to the orphanage. Something Weeping Falls Massacre promises is multiple endings, and I have to admit I found the worst end almost immediately. Getting back in the truck and leaving gives us the “Coward” ending. Unable to muster the courage to enter the orphanage, Eric got in his truck and departed, leaving him with no closure or evidence about what happened.

After this quick mistake, I got into the meat of Weeping Falls Massacre, walking around the orphanage and collecting clues. Walking up to the orphanage does a great job setting the scene on atmosphere alone. Everything is dilapidated and overgrown, and there is almost this unsettling fog covering everything.

Once you are inside this hell hole, it wastes no time in letting the scares fly, all while making you use your flashlight to see. It helps that you, at this time, have no peripheral vision, and you are stuck with what the flashlight shines on is what you can see. I did not expect Weeping Falls Massacre to act as almost a hidden object mixed with a first-person Metroidvania. You have to go around the rooms searching for items to help you get further into the building and gather evidence and clues. The way puzzles in Weeping Falls Massacre work is figuring out a lot of locks. Being led by a ghostly figure while giving you scares almost lulls you into this false sense of safety. Don’t believe this because things change after figuring out some puzzles and getting layers into the orphanage.

The first sign is some children’s scrawlings on the wall that he hates the light. After finding this note, you quickly come across “HIM,” a boney deteriorated bear-like creature who is fast but will stop in his tracks when you flash your light in his face. There are a few monstrosities like this throughout, with the creepiest to me being what I can only describe as the book holder. But this comes as less of a surprise. The game puts you into almost a cutscene when we come across this.

Overall, Weeping Falls Massacre is really good. The mood and atmosphere on display are amazing; everything looks really good and seeing the little possessed dolls run around was terrifying. The puzzle is like a reverse escape room because you are trying to go deeper and not escape. It really works for me. If you like puzzles and having to really think about solutions without being too much on the side of obscure this one is for you. I guess because it does focus on the puzzle aspect of it, which, again, you can really tell that thought went into the puzzles that it plays so well. Having the player focus on them and then pulling the rug out from them with some supernatural scares definitely had me jump a few times.

While I won’t give away the other endings here or more story elements, I think it is worth the time to sit down and playthrough Weeping Falls Massacre. It’s only over an hour, and Tainted Pact games show some great talent here, and I can’t wait to see what comes next.

For more horror, stay locked to DreadXP. If you’d rather have Dread in your earholes, check out the podcast Real Professional!