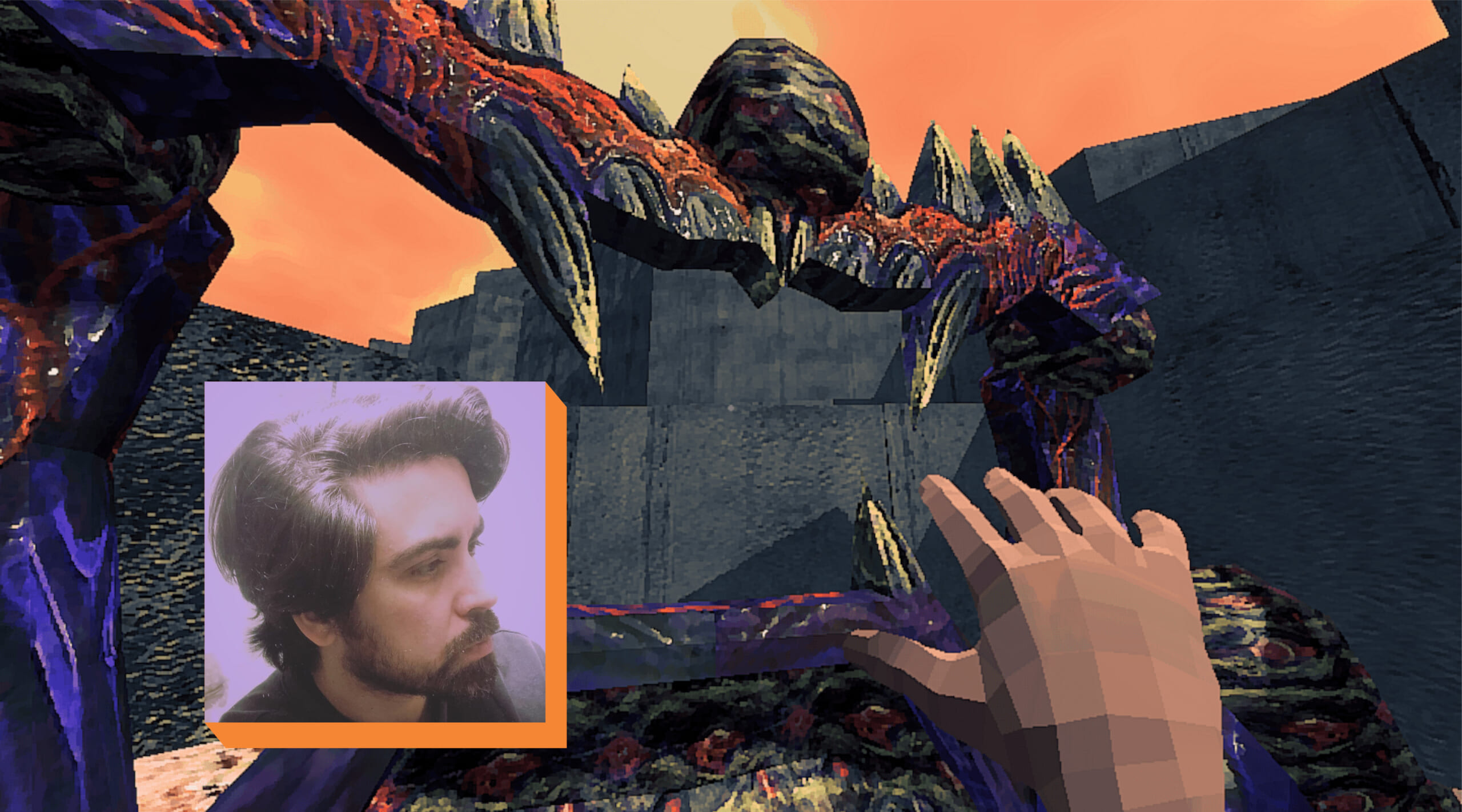 Hello, Nico! Thank you for taking the time to chat with us. Could you give us some information about yourself and the gamedev work that you do?

Hi, everyone! My name is Nico Saraintaris, writer and gamedev from Argentina. I’ve been working in the Gaming industry since 2012—mostly game design and narrative design, but also prototyping and coding. I’ve co-founded Beavl studios—one of the most innovative indie mobile studios from 2014 according to Gamezebo—and shipped over 15 games. I’ve also co-founded two studios recently: BRUTO—studio behind Misshapen, a Cronenbergian Portal-like—and CASE, a studio focused on horror FMV Visual Novels from the new 80s.

I’m also a genre writer—I’ve published four novels and short stories in collections from Argentina and abroad. I like horror, sci-fi and crime fiction. And I have experience in comics and branding—branding is just another form of storytelling.

What is it like to work as a game developer in Argentina? Is it sustainable? Are there government programs to help fund game development projects?

It’s not a straightforward answer. I mean, It might be sustainable. It depends on lots of factors. I believe that game dev is an interesting and enriching field to work on but you have to plan for failure—as with every artistic endeavour.

Regarding government programs, there are several—I was one of the judges last year in a program called ‘Videojuego en Producción’ from Espacio Santafesino.

What is the current state of post-secondary education in terms of game development in Argentina?

Game dev is a complex and beautiful system built by people from all fields. So I think this would be a really difficult question to tackle here—I should talk about the current state for Education in Argentina.

But if the question is more like if there are specific courses or degrees particularly designed for gaming industry roles—let’s say, game designer, level designer, etc.—there are. Having said this, I believe that game dev is like writing. One should learn the craft by doing it.

Could you talk a bit about Bloody Service, the VN/FMV title you’re about to release?

Bloody Service is a dark, gory and violent coming-of-age slasher FMV Visual Novel with gruesome deaths and clever one-liners related to tennis—Just to showcase the quality of our puns, our main tag for the game is: ‘Game, set, machete!’.

Besides full FMV support—‘Full Motion Video’, the amazing trend from the 80s game scene and popularized in the 90s with the CD era, Night Trap, Phantasmagoria, etc.—the game features multiple endings in a dark branching narrative and an innovative inventory system where slots used to store items may affect the narrative outcome of a scene.

Can you give a bit of context as to why you chose the world of tennis for the game?

A publisher asked me to design a slasher killer for a game. I thought of slasher killers’ hands holding weapons—think of someone holding a machete and an axe, for example—Wouldn’t it be interesting to have a killer holding even more weapons? So I thought of conjoined twins—I’ve written a comic pitch in the past with Fernando Martínez Ruppel that featured conjoined twins warriors from The Amazon Jungle during La Conquista.

Next thing was making the conjoined twins tennis players. I want to make them physically strong. I also think if someone can master the technique behind a powerful smash, that someone would have hell of a death blow.

There’s also this thing in tennis where a right-handed player has a slight advantage serving from the right side of the court (AKA Deuce Court). Same thing can be said for left-handed players serving from the left side of the court (AKA Ad Court). Wouldn’t it be interesting if both brothers play singles and have this tactical advantage by serving the right-handed brother from the deuce court and the left-handed brother from the ad court? I think people playing against them would complain, and hearing rich people complaining is like a guilty pleasure for me—there’s definitely something about someone privileged whining.

So I create their background: “A board member of the exclusive Hilltop Tennis Club is the father of two conjoined twins—the mother died giving birth to them. Members from the Club hate the 16-year-old boys, but their father is too powerful, so they let them be. The twins love tennis; they play switching the racket from one hand to the other and they are quite good at it.”

As you may notice, writing for me is about making choices and keep on doing it to justify the previous ones. You know, ‘If you are in a hole, keep digging’

In the end, the publisher told me they couldn’t fund us this time, but I like what I’ve written so far, so I’ve pitched it to my partners at CASE and keep on working on this idea.

You’re also working on Misshapen, what can you tell us about this Cronenberg-inspired game?

Misshapen is like Portal if Portal was made by Cronenberg, a body-horror first-person puzzler in which you distort living matter to solve environmental puzzles developed by BRUTO—Nicolás Recabarren, Fernando Martínez Ruppel and myself.

We originally made a prototype for the 7DFPS jam two years ago (November 2018). The prototype showed lots of potential, so we’ve submitted it to the Experimental Gameplay Workshop and it was showcased there during the Game Developers Conference (GDC) in 2019. After this, we’ve received lots of attention and we continue working on the game. Thing with Misshapen is that the game premise is so weird we’re experimenting a lot with it. We believe that the current iteration is the best so far and we cannot wait to show more about it.

What is it that you aim to do with your games? Do you have a specific objective, or do you simply want people to enjoy themselves?

As with any ‘artistic’ endeavour, my primary goal is to work on a project that’s something on its own, something unique—for better or worse—something you can focus on and say: ‘Mmm, this is interesting. Not sure if good or bad, but interesting’.

Why choose horror as a genre? What do you think that it provides that would be perhaps missing from other narrative genres?

Horror is about limits and going off-limits. I enjoy this dynamic from the creative side of it. I like literary or gaming genres because they imply things outside the sphere. I’m interested in that vacuum around genre’s limits, in puncturing those limits and letting things in from the outside, you know, like a good ‘Home Invasion’ story.

Also, I find it interesting to think of the home invasion sub-genre as a synecdoche—being ‘home invasion’ a good definition for the horror genre itself.

For people unfamiliar with the realities of working as a gamedev in Argentina, summarize the experience in 1 or 2 sentences.

I don’t like nationality-related generalizations, so I would say that there are all types of devs here: good, bad, excellent, just fine, friendly, unfriendly, responsible, not responsible, etc.

The ‘Peso’—our national currency—is really weak and our current economic situation is ‘complex’, to say the least. There’s lots of devs working for hire for foreign studios as we are comparatively cheap, and local studios producing their own IPs.

If you could give other Argentinian aspiring developers any piece of advice, what would it be?

Plan ahead—financial stability is important—and make stuff. As writing or illustration, game dev is a craft, so you’ll get better with time as long as you keep at it.

Also, explore your obsessions, the more you know something, the better you’ll tackle it. In writing there’s this phrase: ‘Write about what you know’. But this is somehow tricky. As Derrida showed—among other philosophers—‘context is unsaturable’. So you won’t know everything, you won’t say everything, you won’t describe or write everything.

Choose what to write, what you make, what to develop. And own those choices. You are those choices. The real danger is the blank canvas. Run from it by making stuff.