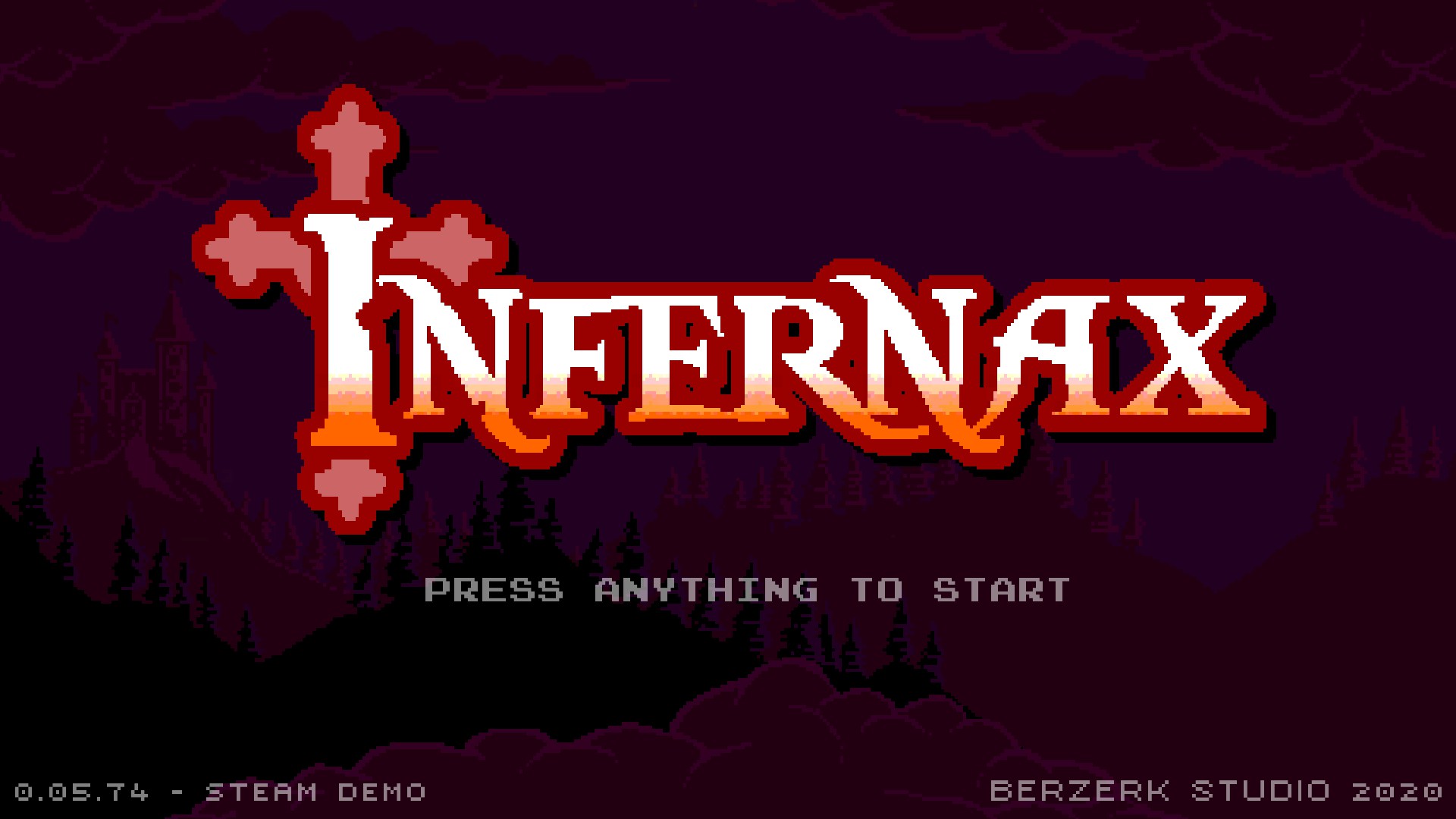 Near the end of 2021, with the release of Castlevania Advance Collection, I was on a bit of a Castlevania kick. I eventually went back to a bit of everything because I couldn’t find anything that scratched that same Castlevania itch. I pored through pages upon pages of Steam games, Itch.io Games, and even Gamejolt, and I couldn’t find what I was craving. That’s just how it was until I found Infernax. I didn’t so much find it as my managing editor let me know that I could request a preview build. I looked at the screenshots, and what the developer had in mind moving forward, and I dove in.

If you’re craving an old-school Castlevania-like experience, I’m happy to say Infernax has you covered. You play as Alcedor, who is coming home to his kingdom after a long few years of crusading. When you arrive, you find that an unholy book has found its way back from the holy land, and in the hands of a mad alchemist, it has transformed your once peaceful kingdom into a place filled with all manner of beats. This is very apparent when, within a minute from disembarking, you’re greeted by a crucified corpse being feasted on by a murder of crows. As you get closer, the crows scatter and the body falls from the crucifix, only to reveal that it isn’t so much a corpse at all, but a member of the wailing undead.

Infernax throws you right into the action. You’ve got a mace, the armor on your back, and extreme hatred of the unholy monstrosities roaming your lands. The graphics are a very impressive pixel affair, crunchy in all the right places. You immediately feel like you’re playing an old NES game. The biggest place that the aesthetic differs from its 80’s and 90’s progenitors is that it’s violent. It is so violent. Zombies heads will fly off after they’ve been defeated, ghouls will be ripped in half from the force of your blows, and as you move through the world, Alcedor gets covered in more and more blood and bits of gore. It’s a neat visual shorthand for, “This dude doesn’t give these monsters any quarter”. You’re getting up close and personal, and real damn bloody.

In my preview version of Infernax, enemies ran the gamut from zombies to skeletons to weird demons and back again. All of them were lovingly modeled, with fun and unique death animations. It’s weird to call a death animation “fun” but here I am. You’ll make your way to the castle, bashing things along the way. You’ll come across a strange man, begging for death. You’re given the choice to slay or pray. It shows the Infernax is a bit more modern than it may be letting on, with this rudimentary choice system. I chose to slay the guy, and was greeted to a lovingly detailed bit of art of a mace crushing his head into a bloody pulp. This choice, so far as I can tell, had no effect on my preview playthrough, and I’m assuming in the full game the choices will hold more weight.

Stopping at shrines placed in the world of Infernax will allow you to save and upgrade. That’s right, there’s an upgrade system! You can choose to upgrade power, health, and mana. Each corresponds to a facet of your character. Power lets you hit harder, health gives you more health, and mana gives you more mana. It’s basic, but it gives you a reason to absolutely beat the tar out of these monsters. They’re filled with blood and XP! Enemies also drop gold that can be spent in small towns. In the first town I came across, I wasn’t allowed to go into any of the buildings until I saved it. To do that you’ll have to make your way to the town gate where a large monster possessing a giant machete wants to get in. After wounding it, you’ll have access to stores that will sell you new armor and spells to use that mana on.

I didn’t find a vendor selling weapons in Infernax, but the option is there in the menu to switch weapons. I picked up some chainmail. Going around the town I also found a person who needed a quest done. There is a quest system in Infernax. Quests can be tracked from your menu. The villager reported to me that a skeleton had been haunting his father’s grave, and gave me a rough location to go check out. This little bit of extra gives me high hopes for the full version of Infernax. The world feels big and well-built. NPCs are happy to talk to you. You can find quests, weapons, and armor. Killing enemies lets you upgrade your character. Infernax has modern trappings stuffed into the body of a Nintendo game from 1991. It will appeal to old school fanatics and modern metroidvania lovers alike.

My main complaint during my time with Infernax is there isn’t more of it yet. I suppose I’ll have to wait until February like everyone else. Until then, you can wishlist it here.