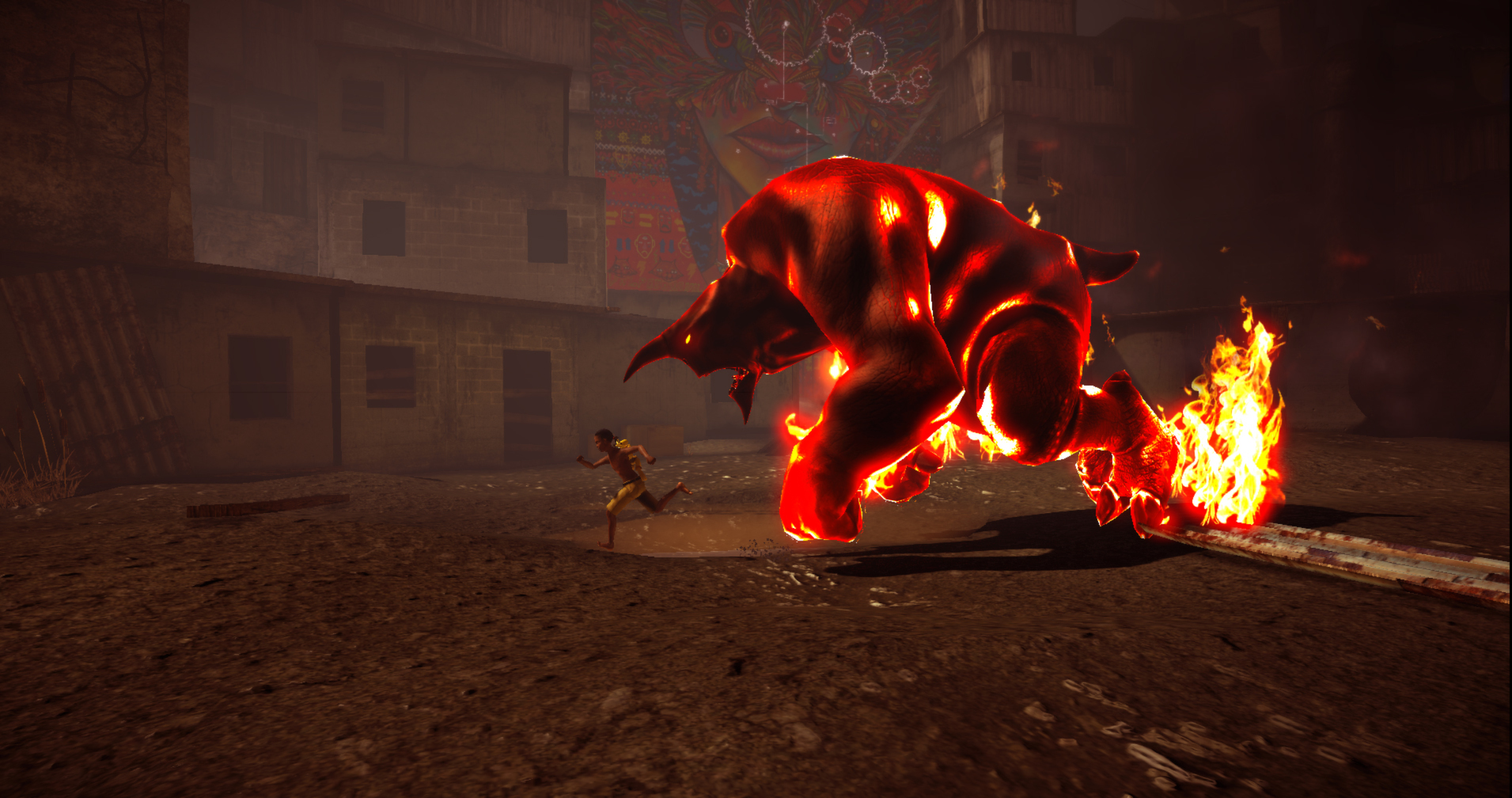 Papo & Yo Explores Childhood Trauma by Depending on a Monster

Papo & Yo is a puzzle game that sees you dependent on a monster. Quinco, a young boy, loves this monster. He’s fun to play with, and he can help push some buttons and activate devices with a little coaxing with food. He can even provide a bouncy platform to make high jumps. He’s a very handy friend to have in a puzzle platformer. However, if he gulps down a poisonous frog, he’ll turn into a terrifying menace. Bathed in flames, he’ll chase you down and hurt you. He makes for a terrifying presence, but one you need to rely on. And, as an allegory for the developer’s memories of dealing with his alcoholic father, tells a sad tale of dealing with a loved one’s substance abuse. Ten years later, this story still cuts deep.

Quinco has to explore his South American flavela home. It’s a striking place to explore full of small homes and vibrant graffiti. The world itself is infused with a kind of childish magic, too. Chalk drawings of mechanisms and devices cover the walls. A clever kid can use these to make changes to the world around them. You can pick up and move whole houses if you need a platform. Roll and reshape buildings. Quinco changes reality around them with these drawings. If you’re ever stuck, odds are good you need to use these drawings to alter the world.

You’re not able to do everything on your own, though. Papo & Yo gives you many situations where you’ll need the Monster’s help to keep going. If a platform is too high, you might need to convince the Monster to wander over and fall asleep so you can hop on his tummy. If you need a switch held down, you’ll have to drag a piece of food over to it. Once the Monster catches the scent of something tasty, he’ll toddle over and have a bite, placing his weight on the switch. There’s also times when he just needs to be nearby for your next action to be possible.

Beyond his handiness, he looks like a loveable creature. He’s not some puffed-up mascot with bright, googly eyes, but has a pleasant gruffness about him. His form looks powerful, yet soft. Squishy, yet strong. He squints at the world through narrow eyes, which gives him a sense of being quietly mad at everything. Even so, watching him spring to life at the idea of a little food loans him a playful nature. He’s like an animal, in some ways. Domesticated, hungry, and kind of sleepy. A good friend, but on some level, they are still an animal. You never want to think of them hurting you, but you know they could if they wanted to.

And Monster is VERY capable of hurting you in Papo & Yo. While he can be playful, if he senses a poisonous frog in the area, he’ll race to its location. Once he jams it in his mouth, you’re in danger. Flames will surround his body and he will hurry toward your location. He’ll fling you through the air, sending you crashing down into the dirt. It isn’t lethal, but seeing this massive, fiery beast rushing toward you will get that heart pumping. It’s terrifying to see this once-gentle creature completely turn on you.

You can cure the Monster of its condition with the right item, but these really only show up at certain times. Plot beats and mechanisms will also keep you out of trouble for a while. You’re not in danger forever, but a part of that feels like it makes things worse. Watching the dangerous Monster turn back into its gentle self doesn’t make that fear go away. You still know what the monster is capable of. Now, though, you have to go back to getting its help with solving puzzles. All while waiting for the next time it will surprise you and turn on you.

This reliance on the Monster is very upsetting. Papo & Yo really wanted to capture that feeling of love and dependence mixing with fear that comes from being in a relationship with an abusive person. Where can a child turn to when they have an alcoholic parent? They’re stuck being dependent on them due to their age and position in life. And children know that the rage is buried just beneath the surface with these abusers. You’re trapped with them, though. Just like Quinco must rely on the Monster, an abused child is often still stuck relying on their abusive parent with little hope of escape. You need them, but they terrify you.

And Quinco still loves the Monster. We’re taught to love him as well through his usefulness in the game. He’s a pleasant playmate when things are going well. He makes our lives much easier. His appearance, while a bit rough, also gives this sense of a comforting animal friend. That sense of danger never really fades all the way after that first encounter, though. That love is always tinged with terror. And that terror only grows over time.

The Monster’s rages grow more frequent throughout Papo & Yo. They last longer and get harder to avoid. Even so, you still need the monster at times. Even when it’s in the middle of a tantrum, you might need to lead it somewhere to accomplish something. As the pain and suffering continue to grow, your dependence on the Monster doesn’t change. You just have to do everything you can to survive it. Avoid getting hurt as best you can. These feelings of dependence and fear constantly twist and mingle, creating a confused, conflicted whirlwind in the heart. Depending on something terrifying, all while loving them, is a difficult mixture to endure. But this is what the game asks us to experience for a while.

You want it to end. You want your loved one back. The Monster who could be gentle and fun. But the frogs keep popping up in surprising places. Maybe you don’t manage to hide them all in time. Maybe they drop from some unexpected place. The game continually loads areas with these frogs, and you just have to scramble to deal with them or endure the aftermath. You get this sense that you could do something to fix it, even if you’re just a child. But often, you can’t. The game will do something you can’t stop, and then you’re dealing with your enraged Monster again. And isn’t it awful that you, as a child, feel a bit responsible while playing?

Papo & Yo creates a dependence on a violent creature to capture that feeling of surviving an abusive parent. By making you need the monster, even though it hurts you, you can’t help but feel what the Creative Director, Vander Caballero, must have felt enduring this while growing up. You go through your own feelings of it being your fault, and fight to find a cure even though that shouldn’t be your responsibility. You love the Monster, even though they hurt you. It’s a striking work that is just as devastating now as it was a decade ago at release.