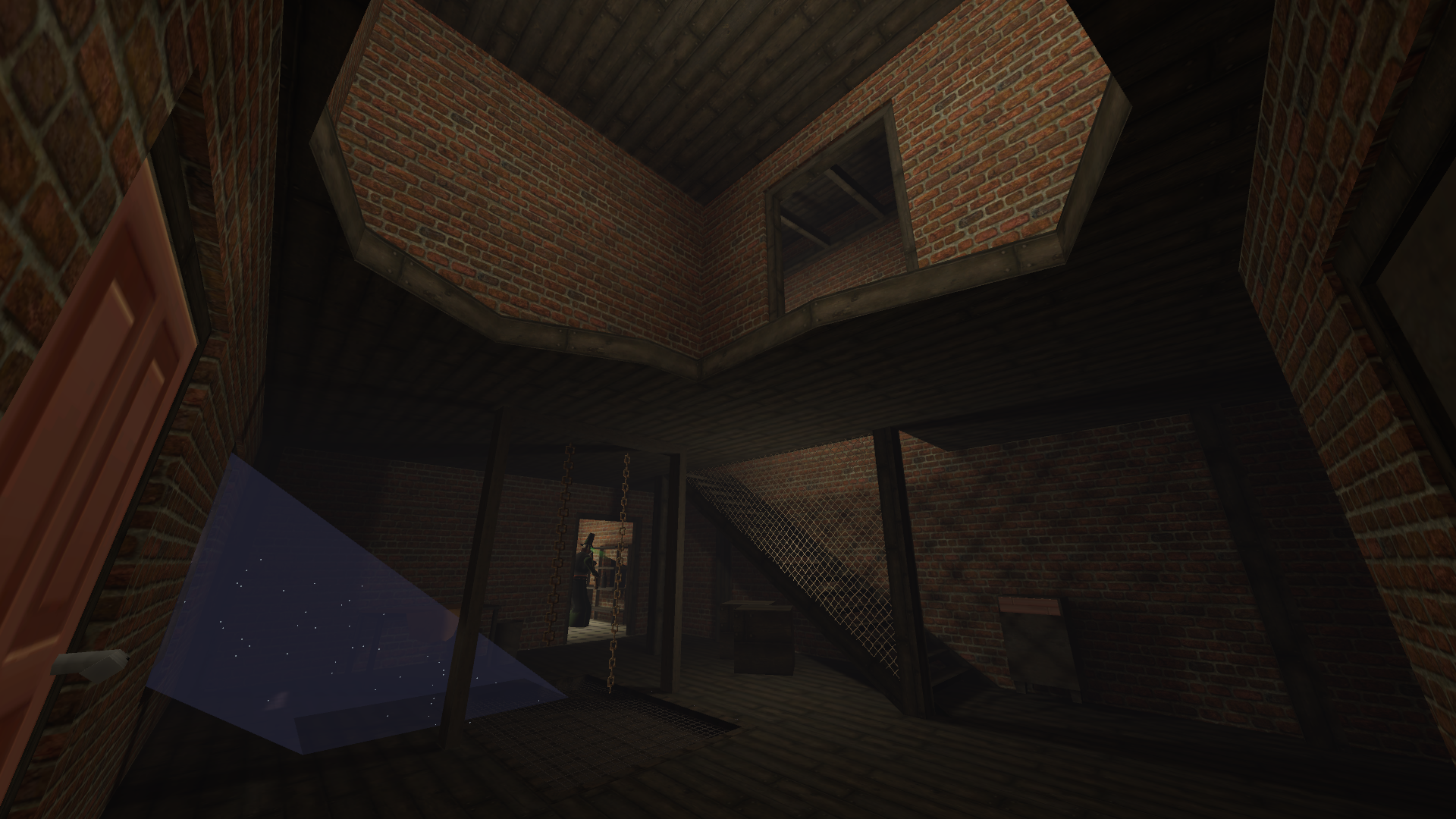 New Blood Interactive had a stellar exhibit this year. New Blood, as you may recall, is the publisher behind Dusk and Amid Evil, two of the best retro shooters to come out in recent years. All of the games of theirs I’d played (those two I just mentioned) have been fantastic, and I was excited to see their new game, Gloomwood. Gloomwood is a game by Dillon Rogers, being produced by New Blood Interactive. Unlike Dusk‘s homage to Quake, and Amid Evil‘s to Hexen—basically, really fast shooters—the inspiration for Gloomwood is much closer to that of Thief.

The setting of Gloomwood is a mysterious Victorian era town, presumably named Gloomwood, though the town appears to be within some kind of nightmare realm. You play as an old-timey gentleman (whom you cannot see, as it’s a first-person game, but is undoubtedly wearing a stovepipe hat and monocle), and must traverse these dark cobblestone streets as you figure out what exactly is going on here.

The gameplay is a lot like Thief. Your character in Gloomwood, at least as far as I know, is just some guy who wakes up in a nightmare land. You have no powers (other than being able to take a bullet or five, which I suppose counts), and you don’t level up. Everything comes down to equipment. The first weapon you get is, what else, a sword cane. All the demo had after that was a revolver and a pump shotgun—more to come, I’m told.

Similar to Thief, the key to Gloomwood is stealth. There is no defined objective in the demo, just exploring and surviving in the city. I’m told there will be NPCs, but right now the area was mostly populated by glowy-eyed pilgrim-y looking folk with guns. Sneaking boils down to using the “walk slowly” button to reduce noise, and hope you can get the jump on whatever enemy you encounter. I tried my darndest to attempt sneak melee attacks, a nice sword-cane thrust. Of course, I am quite bad at stealth and most of my encounters ended in gunfights. But being as Gloomwood is a survival horror game, ammo was a resource to be managed wisely. Before long, I was out of ammo, and stealth became a lot more important.

Visually, Gloomwood may not seem like much right now. But New Blood’s games have never been about graphical quality. Style and atmosphere always trump graphics, and Gloomwood is no exception. The dark atmosphere is one of the best parts. The demo I saw featured a number of spooky locales, from the Victorian streets and stores above to the sewers below. But the feeling cannot be captured in just these screenshots. Gloomwood is dependent on its sound design. Sound plays not only a role in gameplay—throwing a bottle to distract a guard, for instance—but also for creating a fantastic atmosphere. Bad graphics are inconsequential in the face of a great atmosphere and style.

Talking with Dillon, I’m really excited to see where this project is going to go. It’s been in development for a few years now, and the result I have seen was nothing but good stuff. Thief: The Dark Project is his main inspiration. Per his description, the goal ofGloomwood is to take the best elements of Thief, Deus Ex, and System Shock 2, and put them into one game. What’s not to love? It’s an interesting premise, smooth gameplay, incredible atmosphere, and had what appeared to be some kind of mutant plague doctor ghoul that cornered me in a dark sewer and killed me. Nothing but good stuff.

No Steam store page yet, but you can find more info here. You can follow Dillon on twitter at @JollyRogers99.