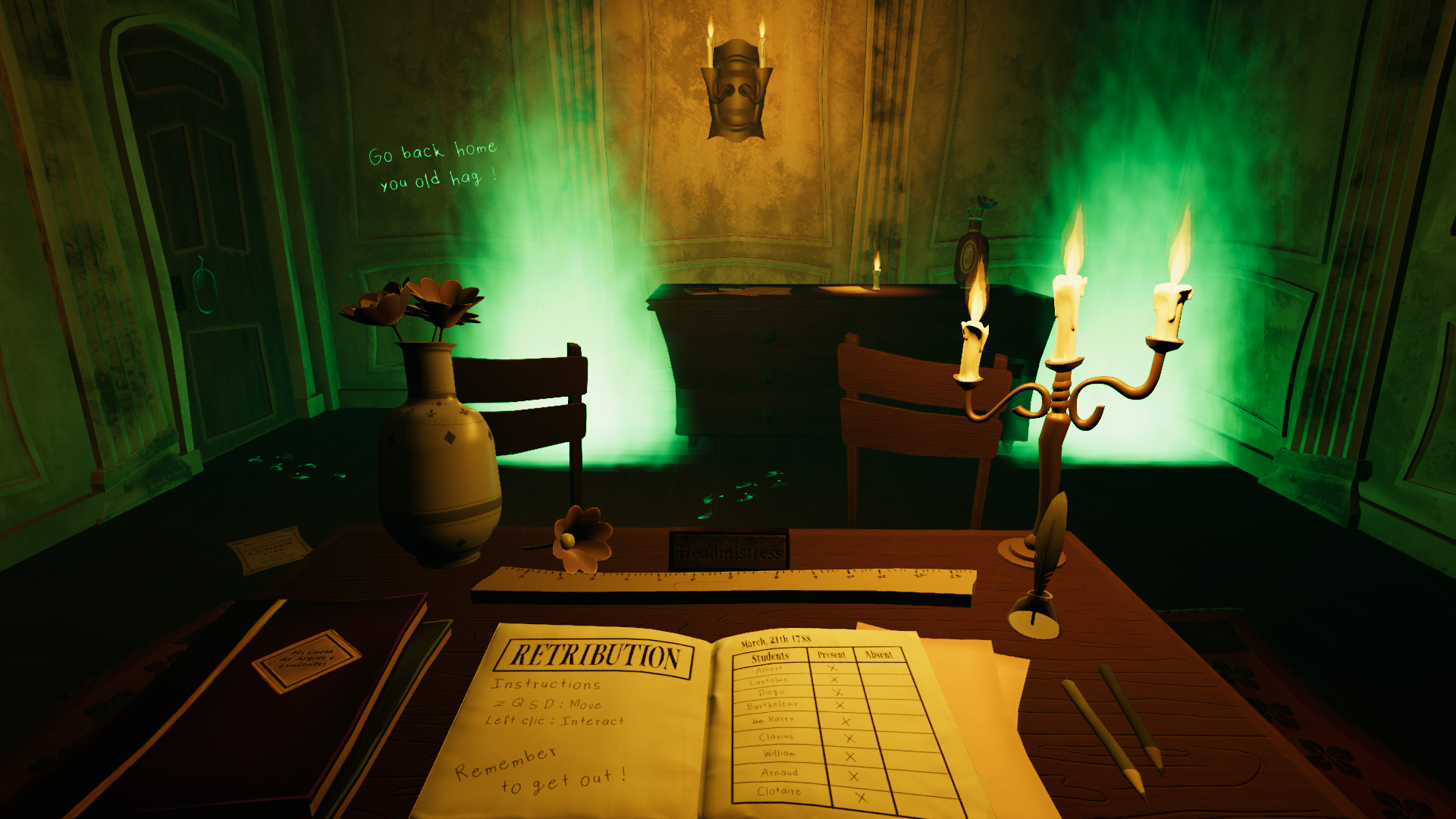 Escape rooms have always fascinated me, having done only one or two in an actual room. But there is an almost sub-genre of the puzzle genre that focuses explicitly on the idea of escape rooms. Like bigger budget titles like I Expect You To Die, The Room, and the recent Escape Room Simulator, I highly suggest you do if you haven’t checked out and are a fan.

There is something so satisfying about overcoming a puzzle and getting this sense of relief when you hear a click and either a door opens or a key presents itself to let you venture further into more mysteries. Recently it feels like fans of puzzle games and the specific escape room games genre have had lots to play with the upcoming Escape Academy just announced.

So I took to itch.io and steam to try and satiate my escape room need, and a quaint short title of Retribution welcomed me. Taken right from the itch.io page, Retribution takes place in New Orleans in the 18th century. Headteacher of a famous boarding school, you wake up in the middle of the night, startled by a strange noise.  Something weird is happening, yet the children should be in bed… But are they? Whatever happens… Don’t be late, Professor.

Starting you awake at your desk and immediately, you can tell this game has a vibe it’s aiming for and does an excellent job of nailing. With vibrant green and flames popping against the victorian decor, I was digging the style. There is also hints at some interesting deeper story revolving around witchcraft with notes about people burning at the stake and threats of burning your loved ones at the stakes, as well as these magical symbols scattered around the rooms.

As you leave your desk and your office, you are presented with the school lobby, some odd symbols on the door, leaving the school locking you in. There are two puzzles in Retribution: a look and find style puzzle in a classroom and the second revolving around this clock and getting it to tell the time. I won’t touch too much on them because they are the game’s main point. It is straightforward to pick up with a very simplistic control style using WASD to move around, left control to crouch, and left click to interact. Also, minimalistic background music makes it all the more haunting when you hear the voices and whispers.

A shorter school project being made in under four months is a relatively short experience, but it works here to show a basis for a potentially longer game. While putting its puzzles in the forefront, with some creepy-ass kids waiting around the corners for you.

After talking with one of the developers, Onna, I learned that this game is also based on the New Orleans fire of 1788, a truly tragic event that burned down over three-quarters of the buildings in New Orleans. I would love to see a full-fledged game built around this idea of the fire, specifically in this school which is surrounded by the concept of burning witches and the children seemingly taking it into their own hands.

Ultimately this is an excellent short experience taking only around thirty minutes to get through, but that is at the speed of me stopping to smell the flowers, if you will, and really taking in the environment and looking at the detail of the building. Retribution was put together by five students at the E.T.P.A Private Technical School Audiovisual Photography and shows off some incredible talent of up-and-coming developers.

For some more awesome horror content, stay locked to DreadXP and check out the recently announced Scream Team on Twitch!