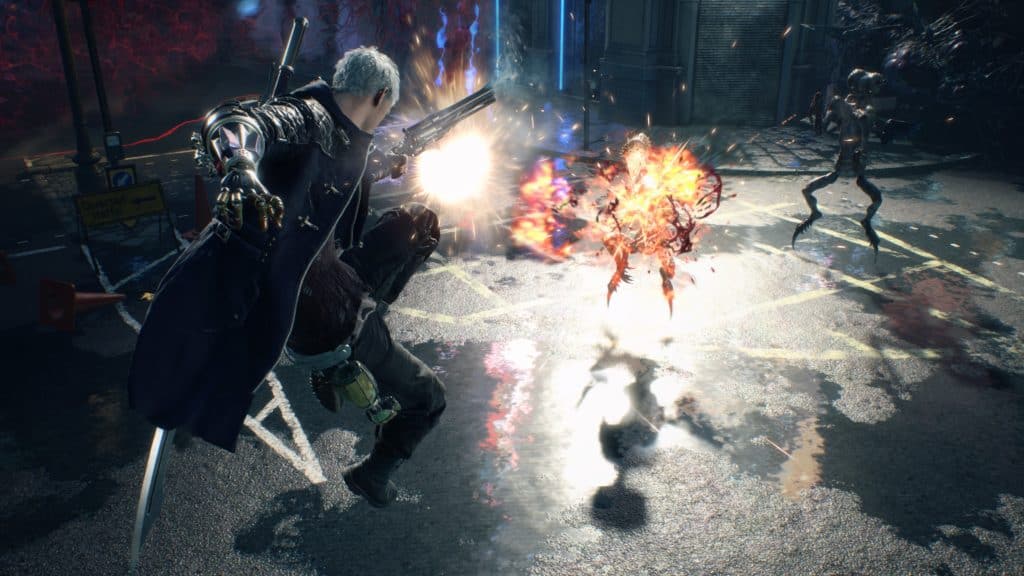 You remember that thing you used to be a big fan of back in high school that you aggressively grew out of and are now embarrassed to admit you styled your personality after? Things like Twilight, Johnny the Homicidal Maniac, Jack Sparrow, Naruto, Etc.? For me, that was Devil May Cry. I wanted to be Dante so bad that it still hampers my ability to maintain normal conversations without derisive snark. I still frequently kill the mood by declaring, “Jackpot!” If you got that reference, then please immediately buy Devil May Cry 5, as this game was made to haymaker punch the nostalgia center of your brain until you forget DMC: Devil May Cry ever happened.

For the uninitiated, Devil May Cry is a series of Japanese action games designed entirely around killing demons as stylishly as possible. Action games are no stranger to concepts like combo meters and aerial juggles, but Devil May Cry introduced us to keeping enemies aloft with a cushion of bullets. Combining fluid combat, tight controls, a killer soundtrack, and a variety of weapons to string it all together, Devil May Cry has held a firm place near the top of the action game landscape for almost 20 years.

That all being said, the game has always been edgier than a broadsword with about as much subtlety. Dante is so cripplingly “cool,” that even demon scythes to the chest aren’t enough to get him to stop casually eating pizza. This is why it’s hard to explain why I like the things I like to normal people. For any casual onlooker, Dante’s detachment from the laws of both physical and social reality plant him firmly into the realm of awkward teenage power fantasy. What makes it awesome is that Devil May Cry totally knows this, and owns it. Dante has spent his years studying the blade, and now that the demons are at our gate, he’s the only one that can help.

Devil May Cry 5 picks up five years after the events of Devil May Cry 4, because as we all know DMC: Devil May Cry is just a myth and never really happened. All the previous protagonists have gotten together to fight a new big baddie named Urizen, and the player is dropped into the shoes of DMC 4 whiny teenager Nero. Nero has lost an arm at some point, but worry not. After quickly losing the initial “supposed to lose” fight, time jumps forward a month. We’re reintroduced to Nero, who now has a kickass robotic arm. More accurately, a diverse arsenal of kickass robotic arms. Oh Devil May Cry, you just get me.

From here on, Devil May Cry 5‘s story is fleshed out through a series of flashbacks from the game’s three main characters. Not content with just a single demon slayer this time around, DMC 5 will drop you into the shoes of three different edgelords. You have your classic hard rock edgelord Dante, with his massive arsenal of weapons. Then there’s the YA edgelord Nero, complete with a chip on his shoulder and awkwardness around girls. Finally is newcomer edgelord V, who is so edgy that even his name is just two edges coming together to make an even pointier edge. He’s an edgelord for asthmatics, skinny as a heroin addict and with just as many tattoos. He reads from a book of poetry to charge his devil powers, walks with a cane that is also a sword, and lets his demonic minions do the fighting for him.

You’ll play as each of them over the course of the game, with certain chapters allowing you to pick which one you’d like to play. It’s far from a vestigial choice, as each character has his own unique fighting style. Dante is the classic pick, swapping between weapons and stances to best fit the situation. Nero is more about timing, with a number of charge mechanics and a high damage/punishment potential. V is the most unique of the bunch, fighting his foes with three different minions that do the bulk of the fighting for him. He still has to get in close to finish the enemies off, but it feels more like a bullet-hell game than a fighter.

Now I’m the kind of guy that picks up his first two-handed greatsword and carries it to the finish line, but even I enjoyed the variety. For the varied options at your disposal, it’s amazing how polished and fluid Devil May Cry 5‘s combat is. Whether blasting foes with your laser bird as V or getting in close with Dante’s fire gauntlet, each encounter provides a reasonable challenge for that playstyle. It would be easy for a game like this to have one obviously overpowered tactic, with the enemies being incapable of handling that particular style of cheese. Enemies are equipped to handle whatever you throw at them, but are still capable of being overcome in a number of ways. Whether you go in for heavy charge attacks, string together endless combos, keep your distance and ping away, there’s a clear path to victory and defeat.

That being said, you’ll want to mix up how you fight due to Devil May Cry‘s iconic style system. As with all games in the series, Devil May Cry 5 encourages you to kill demons in the flashiest ways, then judges you for it. Each encounter will give you a rating from D to SSS. Style goes up for combos and drops when you take a hit. Landing the same attack over and over will give you less points, so you’re encouraged to switch between combos to keep your rating high. Now, none of this is necessary to beat the game. You can just as easily spam the same combo and finish the game with all D rankings. But this is Devil May Cry. You’re not here just to kill demons. You’re here to look awesome while doing it.

Speaking of looking awesome, cut off my legs and call me a Weeble if Devil May Cry 5 doesn’t look fantastic. We are living in the age where actors are quickly being replaced by cheaper CGI version that never complain about insufficient catering, so I rarely take the time to compliment graphics. Resident Evil 7‘s RE Engine is on full display here, but more importantly the visual design is eye wateringly fantastic. Enemies and environments are distinct and colorful, just waiting to be covered in a cavalcade of particle effects and explosions. Throw in the cinematic camera that accents the action while never being too intrusive, and the game is a wonder to behold.

When the combos are flying and demons dying by the handful, the game is an absolute spectacle to behold. The thing is, actually getting those combos off is kind of a chore. The dark side of Devil May Cry 5 is that while it’s a wonderful video, it’s a bit cumbersome as a game. Which is a big part of the whole video game equation.

Between the attacks, blocks, jumps, combos, dodges, stance switching, ranged attacks, charge attacks, mega-charge attacks, and a taunt, controllers have long run out of buttons to handle everything DMC 5 wants to do. So if you want to pull off the games different combos, you’ll have to combine timed button presses with a whole range of directional inputs, modified by the lock-on. So if you want to do a charge attack into aerial juggle into laser gauntlet heavy attack, you’ll have to lock on while pressing forward and attack, keep locked on while you press back and attack (but don’t hold it, or else you’ll jump), then release your lock-on and press the special attack button. Do all of this while remembering to dodge, charge your weapon, and pepper in ranged attacks to keep your combo going.

During the more frantic battles, it’s like trying to solve a flaming Rubik’s cube while being attacked by a swarm of bees. Even the more leisurely encounters can become a hassle of memorizing which combos to do to get the highest score. As I said before, you can always ignore it, but the game will definitively call you a wuss if you take the easy route.

Speaking of easy route, you actually can’t lose. I’ll take a second to let that sink in. In Devil May Cry 5, death is but a momentary inconvenience. You’ll collect special gold orbs that function like quarters in an arcade machine. You get gold orbs as a daily login bonus (a confusing design choice for a single-player game), or they can be found like any other item. You shouldn’t worry about running out, as you can always just use regular experience points to resurrect if you run out of orbs. I’m not against making games more accessible to everyone, but it really sucked the tension out of the game.

Even with the infinite respawns, the game just wasn’t that tough. Once I mastered a standard set of combos and stopped worrying about nailing the S rank in every encounter, I only died like 6 times. The only times I ever got in over my head was when I was trying out a new move and forgot that the shotgun and juggle attack still worked just fine. The bosses are the only times I broke a sweat, and usually it was just because I couldn’t figure out which lightning blast waves were blockable and which had to be dashed through.

There are a couple of other niggles I have that fall more into the confusing category than full complaints. There’s this weird multiplayer component, where other players playing through the same level as the other character will show up in the background doing stuff. They never directly interact with you, making me wonder why the bothered programming it in. There are also way too many points where you can lock yourself out of secrets by accidentally going left instead of right (or some derivation thereof). I thought we had left the randomly spawning point-of-no-return back in the PS2 era, but Devil May Cry 5 is retro in this specifically terrible way.

Other side of the same coin, Devil May Cry 5 also embodies everything that is great about being retro. Levels are packed full of secret alcoves, hidden paths, and entire challenge missions accessible by anyone industrious enough to explore every nook and cranny. There are all kinds of hidden secrets, including an entire special robotic arm that is just used for doing sick grabs when bosses are wounded. There’s an entire super upgrade just to get the coolest extra taunt. This is the kind of game design that keeps you coming back, the kind of self-discovered fun that really defines the games of my youth. Somewhere in the pursuit of racking up the highest kill-streaks and rendering every hair and pore, we forgot that this is the kind of fun that got us into gaming in the first place.

Devil May Cry 5 is a wonderful marriage of the old and new. It combines a classic, “kill shit while looking awesome”design mentality with all the flashy lights that modern tech can deliver. Fans of the series will find plenty to love, with the ample new additions fitting snugly into the series style without feeling like retreads. That being said, I wish the game were easier to play. The over-complicated controls will ostracize casuals, and the decreased difficulty will be a letdown to hardcore gamers. I can’t stress just how much this hampers an otherwise fantastic game. It’s still a wonderful experience, but misses the mark of real perfection.