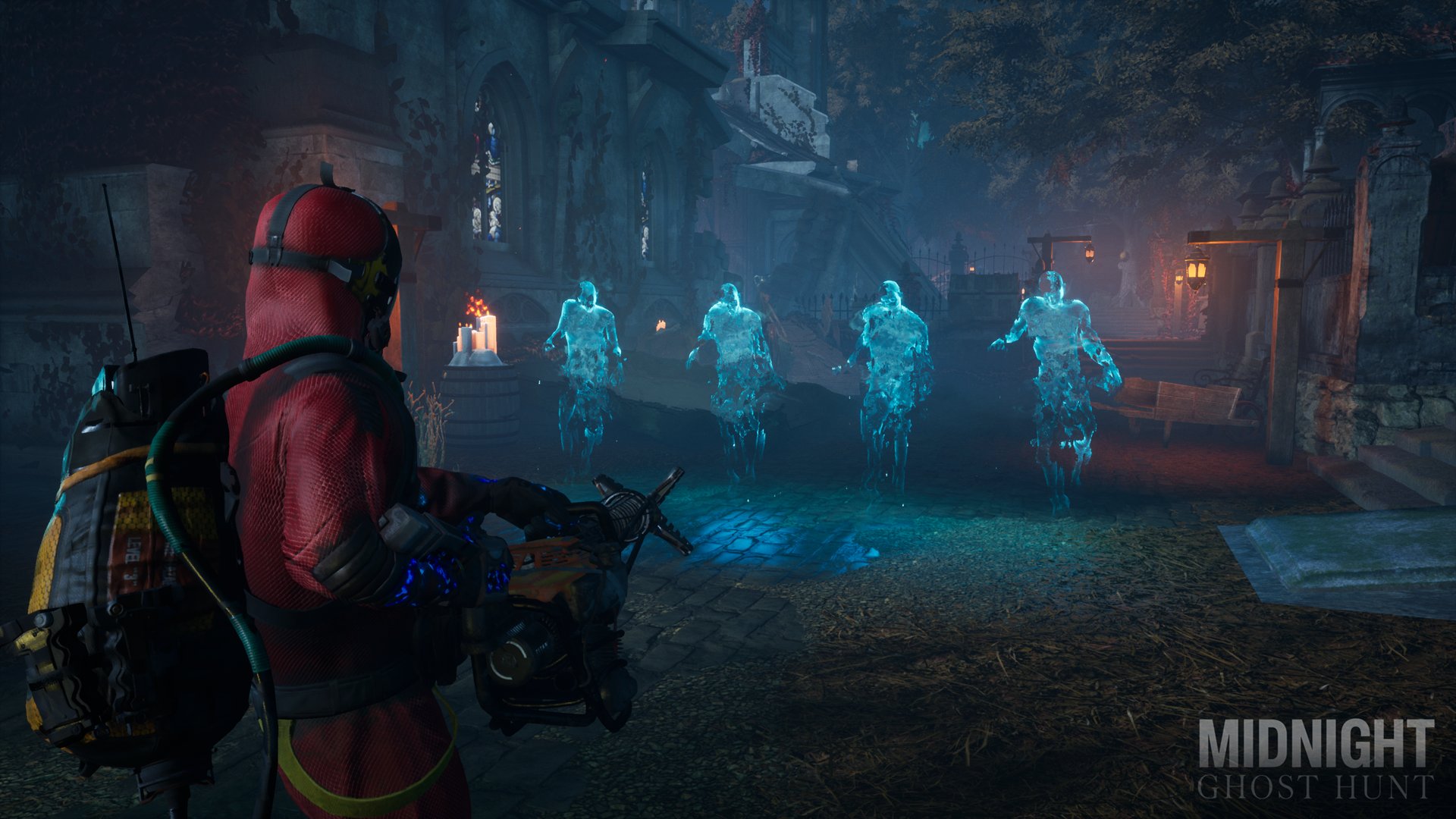 “You got chocolate in my peanut butter.” “Two great tastes that taste great together” “keeps the hot side hot and the cool side cool”. Combinations are fun. Taking two established and very well-liked things and mashing them together is often a simple formula for success. Did you know, that Batman: Arkham Asylum was originally envisioned as a rhythm game? Even in it’s finished state, the underlying mechanics of the combat still demand a certain amount of rhythm to get just right. The small, underlying combinations are impactful, but the biggest successes are games that completely combine two already good playstyles. Midnight Ghost Hunt excels in this aspect.

Prop hunt is nothing new. In its earliest form in Gmod and early Call of Duty games, it was a fun diversion. You had a team of props, whose goal was staying hidden while hunters worked their way through the map, trying to find them. It was hide and seek with a twist, but granted it was a bit boring after a while. The props would do best if they just stayed still and hidden. It isn’t a very dynamic gameplay loop. Most of the action of a round of prop hunt occurs when the prop players shrug off the winning strategy and get goofy with it. There is a certain unhinged joy in watching a chair sliding along the floor at mach 2 while being shot at by someone with bad aim. Midnight Ghost Hunt looks to change this dynamic.

This long intro is a way of saying that Midnight Ghost Hunt takes the best parts of prop hunt, and makes them better. The goal is simple. Ghosts need to stay hidden or un-hunted for 5 minutes. After five minutes, at the stroke of midnight, the ghosts become overpowered with arcane power, and turn the tables on the hunters. In the five minutes preceding the Midnight Ghost Hunt, the props – in a huge departure from standard prop hunt gameplay – are still pretty damn dangerous. Ghosts have access to an fps-like loadout screen, the same as the hunters. They have the ability to engage in subterfuge and hit-and-run attacks on hunters. The most basic is the ability that every ghost player has to fling their chosen prop at a passing hunter. It makes prop choice matter when something like, say, a mug might do a few points of damage, but a full-sized grandfather clock might put down a hunter for good.

The goal of a ghost is to either survive until midnight and then destroy the hunters, or; destroy the hunters before the clock ever hits the witching hour. I am a huge fan of the poltergeist ability, which allows a ghost to remotely control up to 5 objects. The objects will float in the air until a hunter gets close enough, before rocketing into their face at high speed. It’s a fun way to set up choke points to discourage and even knock hunters out of the game early. I was playing with DreadXP Community Manager Steven, and they were using “corruption”. Corruption allows a ghost to add an extra damage boost to possessed items, and synergizes well with poltergeist. My floating items took on a sinister red glow and went from a hilarious tactic to slow down unaware hunters, to a legitimate way to win the game via the machinations of a flying barstool army.

Midnight Ghost Hunt rewards playing well with others with synergies like these. You can get along fine without cooperating, but it’s so much better if you bring friends. These synergies combined with teamwork net you more credits after the game to customize your ghosts and abilities, so it’s always just better to be friendly. I’ve spent quite a lot of time extolling the virtues of ghost play, but playing hunter is just as rewarding. Prop hunt games in the past have generally been hampered by being built in the existing framework of the game they’re spun off from. No system is there just for the sake of prop hunt, and it shows. In Midnight Ghost Hunt, the experience was built from the ground up for prop hunt gameplay. The hunters are decked out with an array of hilarious ghost hunting tools to help them catch those sneaky bastards before midnight hits.

Take, for example, the Salt Shotgun. It’s…A salt shotgun. Assault shotgun. There’s a good joke there if you care to find it. It’s a converted double-barrel shotgun that fires salt, known to injure ghosts in most major media properties. It’s just one of the many ghost-centric weapons available to the hunters. There’s also an SMG that fires energy, and even a harpoon gun. Outside of projectile weapons, the hunters are equipped with a suite of tools that work together well no matter what kind of team composition you want to work with. There’s a sensor to tell you if there’s a ghost hiding nearby, some ghost traps that stick a freewheeling ghost in place if they pass over it, and tons of other fun tools. Midnight Ghost Hunt had a lengthy development process to get this all right, and it shows. Special care and attention have been put into every aspect of the experience.

The environments are beautiful and varied; a high school, an old theater, a pirate ship, an old spooky mansion, and others. Very rarely does an early access game launch with such a comprehensive set of maps, cosmetics, and general customization. It’s frankly just downright impressive. I could talk about it at length, all day, but that would prevent me from saving up enough in-game credits to buy the mummy cosmetic for my ghost. So all I can say is if you want the ghost hunting feel of Phasmophobia, combined with the zany, frantic action of prop hunt; then you’re probably looking for Midnight Ghost Hunt, which you can pick up HERE.