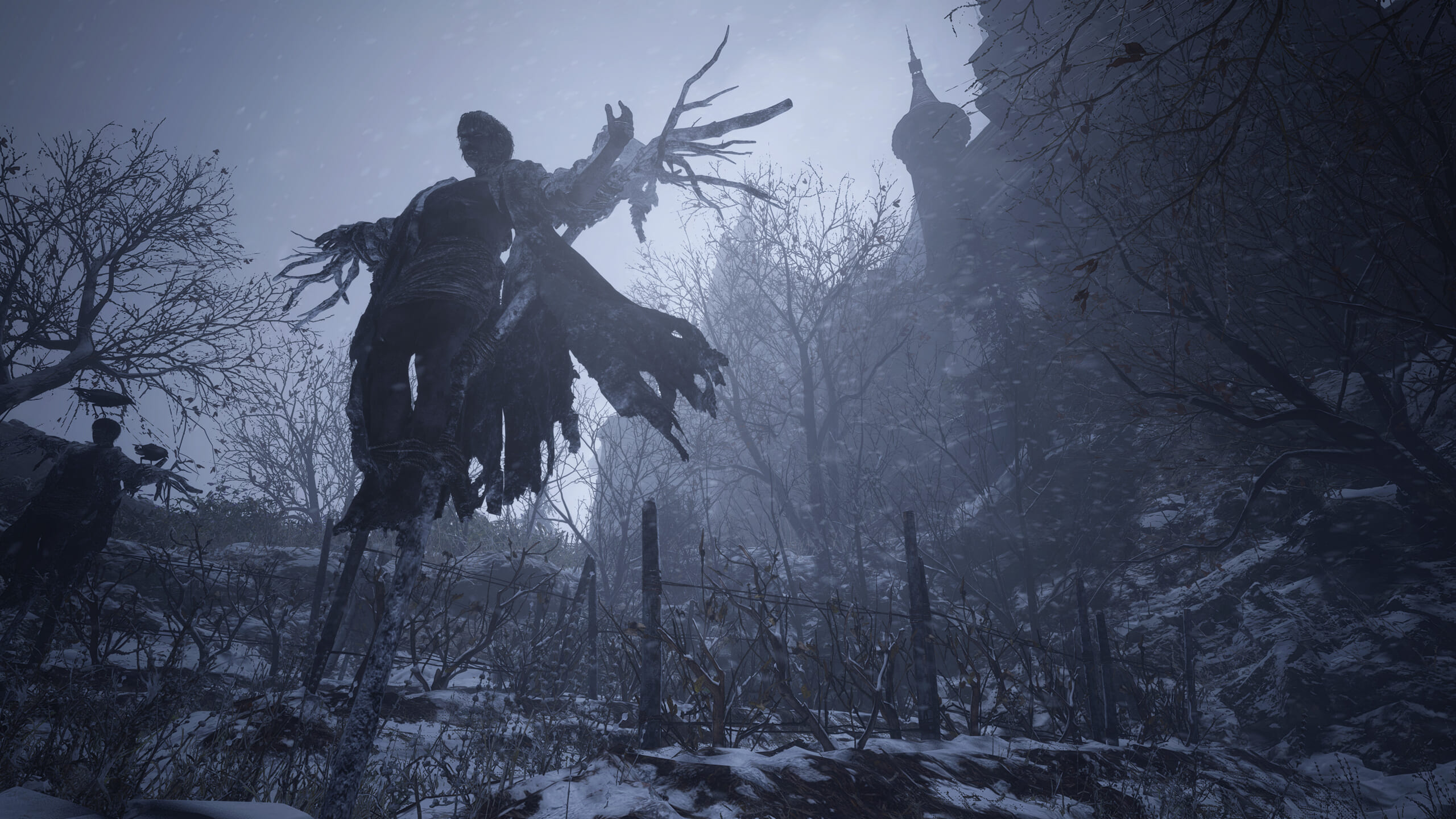 Resident Evil Village had some infamous memes, no not the big lady, the ones about Ethan Winter’s hands getting beaten harder than a dead horse at a rodeo. To be fair, Ethan does get sliced and diced over and over until the story straight up incorporates it into his revelation as a mold man. Waving away the bio magic behind his unlimited blood supply and detachable arm powers. It’s honestly shocking how much torture Ethan goes through all for a story he has no place being a part of and perhaps that’s what makes the antagonist so condemnable.

We play as our denizen of the mushroom kingdom trying to rescue his daughter Rose from Miranda’s castle who intends to sacrifice Rose to resurrect her own daughter, oh and to do so requires tapping into a super hive mold that happens to be the source of the Resident Evil 7 infection. For this resurrection, Miranda spends the lives of a village she’s ruled as a divine matriarch for a century along with Ethan’s family and Redfield’s boy scouts.

The conclusion to Resident Evil 7 comes across discomforting as Ethan escapes with his wife Mia, a major player in initiating the disaster. Between the end of Resident Evil 7 and the start of Village, there’s little to say of Mia being reprimanded for smuggling bioweapons that destroyed over a hundred lives or any efforts by Chris to track down the perpetrators backing the Eveline project. There’s a large vacuum of repercussions for this manmade disaster to any parties involved, an absence of justice or even deterrence from the circumstances to reproduce another event.

When Ethan comments on the repeat of the hell he endured in Resident Evil 7 it resonates with our confusion as to how under Chris’s watch Ethan ended up in another biohazard along which is also the origin of Resident Evil 7‘s infection. With the revelation of BSAA’s bioweapon soldiers along with the body count under Miranda does the story become painfully close to the reality of disasters. Private interests and organizations with the assets of a militarized state tearing apart earth itself in the pursuit of a highly lucrative new prospect. And the occasional individual with an ego and way too many resources. It’s a pair of villains that hits home to real anxieties about the environment, the covid pandemic, wealth inequality, etc, etc. I’ll assume everyone’s in the know on the apocalypse.

Some games renowned for high stakes interdimensional plotlines are woven like a rainbow road through all 82 of Saturn’s moons. Capcom gives some characters ulterior motives but in summary, the central plotline is a corrupt military organization plus a mad scientist trying to revive a loved one is cartoonishly absurd and single note yet it works, it reflects the impulsive reality of disaster projects and eccentric irresponsible elites who disregard all conventional wisdom.

Now questionable story writing doesn’t necessarily mean a bad story. Resident Evil is no stranger to camp or entertainingly bad dialogue from its origins of a Jill sandwich to Ethan navigating a slasher plot like a goldfish with a concussion. If anything the more convoluted the plot becomes the more endearing Ethan’s barely functioning brain and unbreakable will to rescue his daughter is. It’s a dose of blind heroism that cuts through layers of schemes and politics.

The Monsters of Resident Evil revolve around biological warfare and body horror with humans turning into durable zombies or metamorphosing inside out into various chimeras and kaiju. Ethan and our heroes through the series are thrown into orchestrated events over and over. The endless cycle of mass casualties and biological nightmares becomes its horror of a military complex and massive arms race not unfamiliar to anyone in tune with 21st-century events.

Umbrella, BSAA, FDC, The Connections, The US military. Resident Evil’s inter-series plot is an endless Ferris wheel of organizations twisting and turning, if any fingers are to point any individual party can simply delegate blame to another branch of bad apples.

There is no original sin, no character flaw to punish out, no chaotic imbalance in nature to restore, our heroes never restore the world they simply stop the situation from becoming worse. Within the Resident Evil Universe, a biohazard disaster is not unlike our natural disasters only their’s are less predictable and indiscriminate. Time and place are inconsequential, living in the world of Resident Evil are like walking through a lightning storm. Doesn’t matter where in the world or how remote or populated the location is, you can be the next collateral.