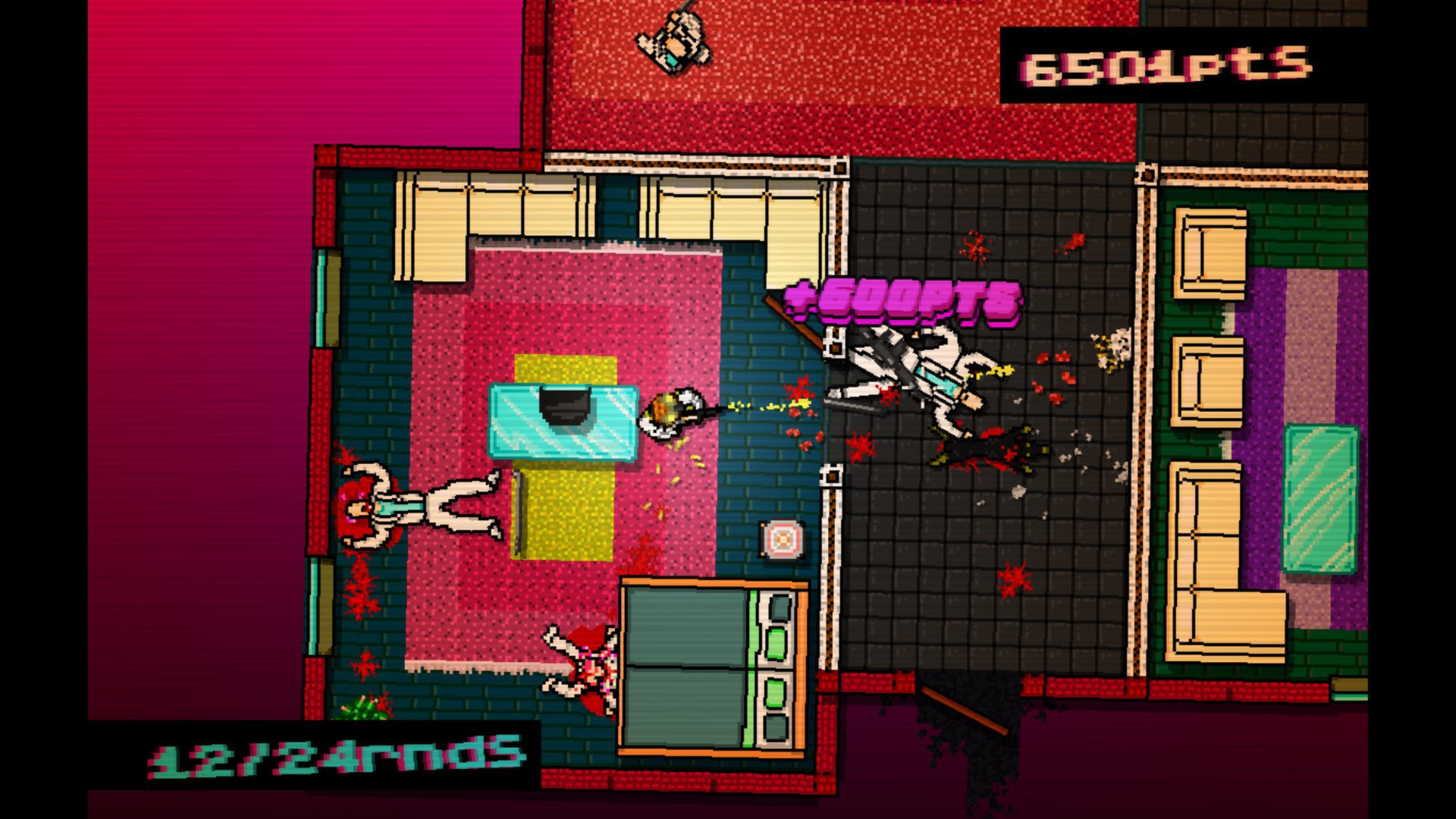 Hotline Miami takes you to a ruthless world where a single misstep will get you killed. If someone with a gun catches sight of you, you’re dead. Hesitate to take a swing with that bat and you’ll be lying in a pool of your own blood. With stakes so high, you’d think it would make players cautious. Maybe feel a bit of fear when the price of a mistake is your life. You don’t want to die, right? Its mechanics and pounding soundtrack turn that tension into adrenaline, though, making you crave every deadly second instead.

That desire to push yourself into danger comes from many different elements of the game. The first is the speed at which it plays. You can really whip through the halls of each stage. There’s no screwing with doors to open them. You pick up weapons really fast. You attack quickly as well. So, it’s easy to just rush into areas and mow enemies down before they can react. They can react pretty fast, though. Having the difference between dying and winning be so very tight – that window so incredibly short since enemies can practically kill you on sight– makes every win feel incredible.

You also have a lot of combat options in Hotline Miami. You can grab many different tools to use as weapons. Guns, crowbars, bats, knives – you can beat someone to death with a briefcase in a pinch. Not that everything you do is lethal. You can clobber someone with a door if you move through it at the right time, but this just knocks them down for a moment. You still need to finish the job with something lethal. It’s the same as when you throw a melee weapon at someone. It’s nice to be able to just toss a crowbar across a room at someone holding a machine gun. You have a lot of options, although some will require you rush in to finish the job.

All enemies, as well as your character, die in one lethal hit in this game. One gunshot puts you down. Taking a bat upside the head will leave you a corpse. The deal is the same for your enemies, though, so you can take risks if you think you’ll get the drop on your foe. If you dart around a corner and smack them once, it’s not like you need to worry about landing multiple hits before they go down. You just need one solid blow and that’s one less foe to deal with.

If you were walking into a room blind, that would be a problem. Hotline Miami gives you an overhead perspective that tells you everything you need to know to plan your attack, though. You’re able to see several rooms around you and the patrol routes of the enemies inside them. It’s easy to wait beside a door for someone to walk near it, letting you barge in and kill them before they know you’re there. As you can see so far around yourself, you can come up with plans without even slowing down, making decisions as you charge toward a room. You know exactly where your target will be before you’re anywhere near them.

All of this stuff sounds like it should make you overpowered. You can see most of your targets well in advance. Throw a melee weapon if you need to suddenly attack at a distance. You can move in a hurry, easily darting from room to room. When you can plan ahead and move fast, it sounds like you’re going to outclass your enemies. They’re intelligent and dangerous when they know you’re around, though. They’ll slowly set up patrols and situations where you’ll get blown away the second you open a door. Like I said, you die fast, too. It’s easy to make one mistake and find yourself dead on the floor.

When I played Hotline Miami ten years ago, I always figured I would reach a point where I would want to slow down. Where smart foes would rip me apart so fast that I would begin to back off. Play it safe. Yeah, you can move fast and you often know more about your foes than they do about you, but after you get blown to pieces a few times, you’d think you would take it easy. Approach things more cautiously. I kept expecting a nervousness to creep into me. You’re in such a deadly situation that it should be a little nerve-wracking.

It never reached that point, though. Being able to plan my attack from far away, and all while I could rapidly pull off some lethal attacks, made me just want to keep moving. Not only this, but I wanted to throw myself into it even more as the danger increased. The more enemies there were, the greater the chaos. If they had crafty traps set up, pulling off that one run where you managed to kill everyone in the room felt amazing. You would often either die or beat the stage in seconds, and dancing on that knife’s edge was thrilling. A single throw, a missed enemy, or an opportune swing would make the difference between winning and losing. And I didn’t start to play more carefully. I just kept wanting more.

The soundtrack ties all of those speedy, creative mechanics together in Hotline Miami. The surreal, driving music keeps pushing you forward with its catchy beats. It set a quicker pace for the game, making me want to keep moving along with the music. The music felt like it was encouraging me to create mayhem, gently goading me to keep moving faster. It felt wrong to dawdle when these tracks were pulsing in your ears, pushing me to continue my rampage as fast as I could. It was that final piece that drove me to kill as fast as I could.

I always assumed that I would slow down due to the dangers throughout Hotline Miami. Enemies would get the drop on me dozens of times. I’d die over and over again. I could make another attempt so quickly, though. Could plan something new as I watched enemy patrols on my walk over. I had information, a slew of weapons, and could kill so quickly. It should have made me timid and cautious, but its mechanics and its music turned that fear into a need for mayhem. The danger made it more exciting, making me crave more and more. It’s interesting to see a game use sound and design to turn a terrifying situation into one that drives you forward, creating an experience I haven’t forgotten in the decade since it came out. 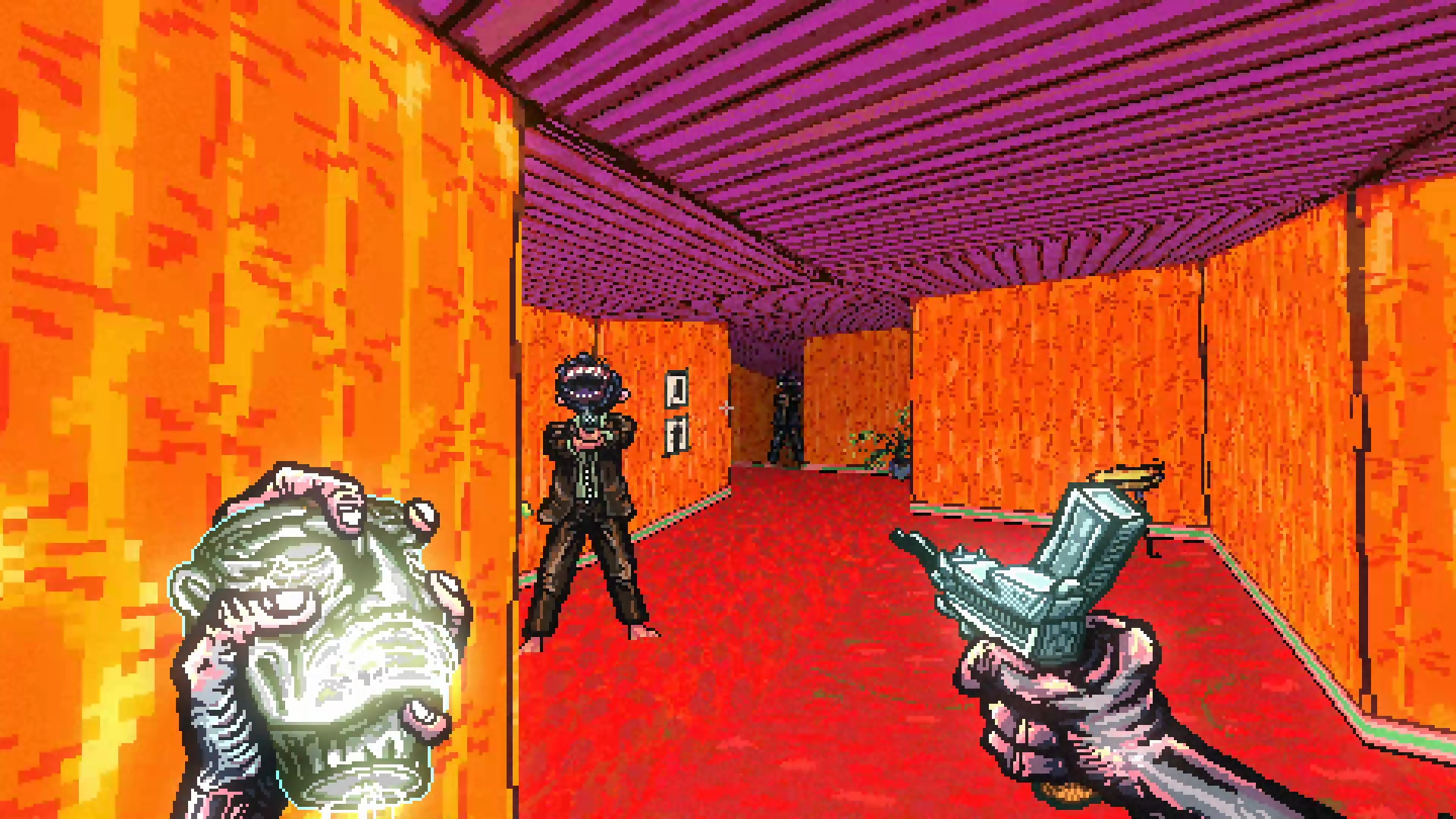 Ultra-Indie Daily Dose: Post Void Is A Psychadelic Shooter Of The Best Kind