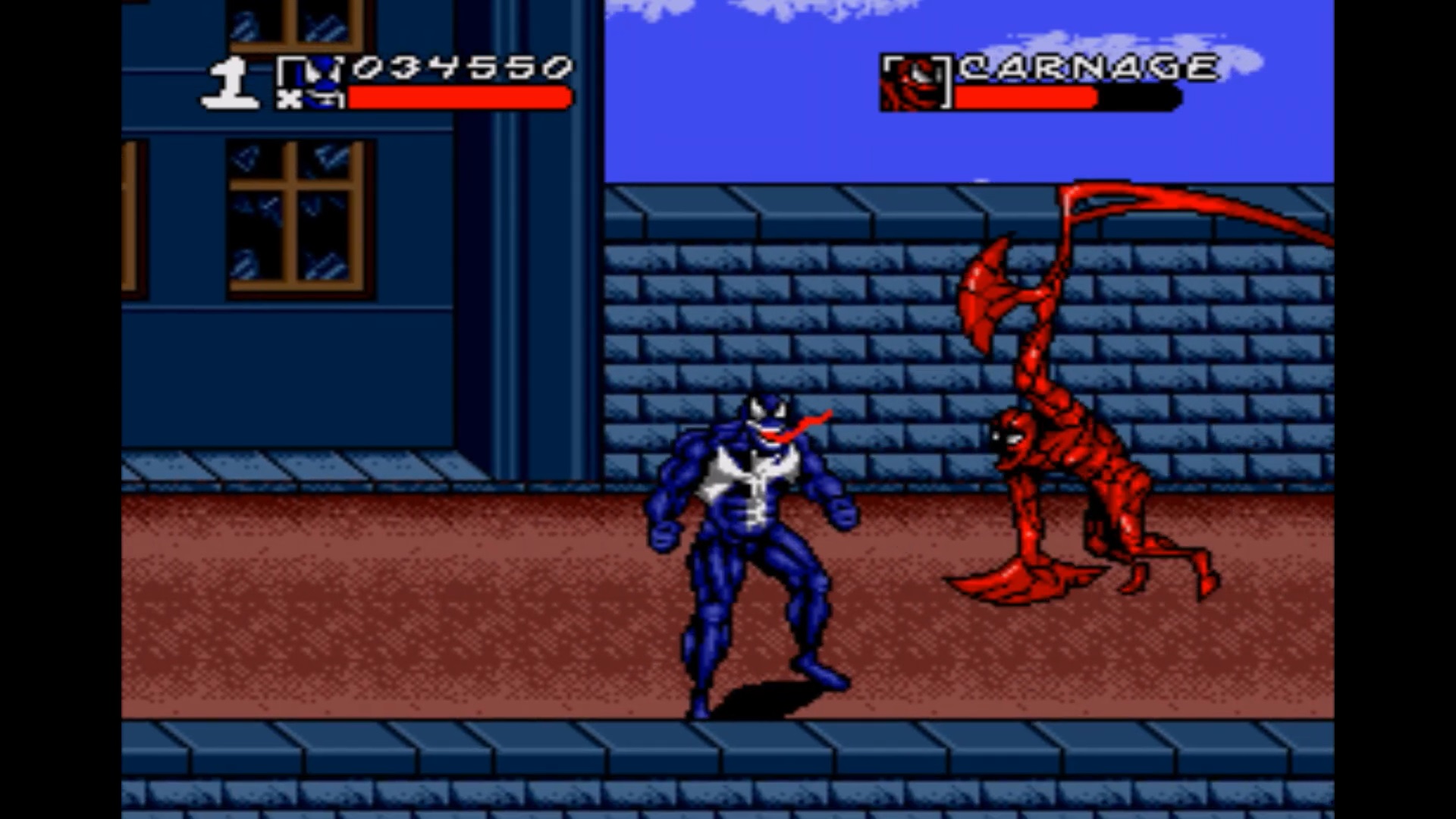 Making Venom and Carnage fight is always going to make for an impressive throwdown. The pair of symbiote-powered villains tend to get pretty vicious when at each others’ throats, after all. It sure made for an impressive beat ‘em up on the SNES/Genesis with Maximum Carnage, the game adaptation of the comic book storyline. While turning the ruthless story into a game was a sharp move, it was the soundtrack by rock band Green Jellÿ that gave this title a weight that captured the horrors and violence you were facing down.

Maximum Carnage was a dark, violent run throughout the Spider Man comics. Well, as violent as you could get under the Comics Code Authority. Carnage is what happens when you give a serial killer similar powers to Venom. You can guess how well that goes. Anyway, Carnage enlists a crew of murderous villains to cut a bloody swath through New York. One member of his crew, Shriek, drives the people of the city into a frenzy with her powers. In the comics, it took a whole slew of heroes to bring the mayhem to an end. Add in a little in-fighting between Spider Man and Venom on how to deal with Carnage, and you had a story that blew my mind back in the 90’s.

The game takes you through the story of the comics, having you fight through the various narrative beats. Not that Carnage and his crew are the only people you’ll be fighting. Shriek, one of the villains, has the ability to use her psychic powers to make people turn bloodthirsty. This results in an endless supply of punks for you to beat up. Ordinary people are taking to the streets to beat Spider Man and Venom down. What can you do besides stomp them right back? And survive periodic onslaughts from multiple members of Carnage’s gang? Nothing to it.

Before you even get to any story or gameplay, though, you’re introduced to Maximum Carnage with its opening theme. This song was unlike anything I’d heard on the SNES before. Hard metal guitar and drums pounded out of the game on a wave of crushing sound. This sound style sets up this hard attitude before you even began. Like the comics, there seemed to be a harshness and cruelty to it. It was very new to me for the time period. A menace that I hadn’t seen before in games or comics.

The track “Streets of New York” would follow this up when you hit the first level. Well, after you’d seen an incredible pixel rendition of pages from the comics. This track is a bit more laid back than the opening theme, but still coursed with these powerful, shrieking guitar notes. These particular tones came from making computerized renditions of the tracks that Green Jellÿ wrote for the game. This rock music loaned it the title incredible energy from the drums and driving guitars. It gave the action this sense of weight and power.

The soundtrack wasn’t the only impressive bit of audio in Maximum Carnage, though. The punches in this game would create these loud, heavy smacks as you clobbered foes. The sounds of impact are such a vital part of any beat ‘em up, and here, the developers really nailed them. You get a real sense of striking power from that sound. Especially when you play as Venom. His stronger attacks, and the bit of hesitation with each blow, makes them really feel like they’re crushing bones with each strike.

The game would continue to dial up the sense of violence and danger with each song. With “Heated Battle,” the first boss track, you’d get this surreal energy as well as this sense of ever-increasing force. The song keeps building on this unsettling energy as you face the pair of bosses, capturing the odd events that have compelled two random women to try to beat you to death. It also carries this sense of danger that the soundtrack had only hinted at before. This is fitting for a boss track, but also helps create a sense of fear of what you’re facing. It’s a pulse-pounding beat ’em up, but one where the music gives you this feeling you’ll likely die. Carnage isn’t know for going easy on people, right?

The track that plays as you climb the building, followed by the high-intensity song for your battle against Doppelganger and Shriek on the rooftop, continue to build this monstrous energy within the game. The stakes feel like they just keep getting higher as you progress through Maximum Carnage, even if you’re still quite early on in the game. It’s the kind of music that really gets your heart going and motivates you to beat your enemies down, but infused with that bit of fear that tells you that you’re outnumbered and overpowered.

You’re not outnumbered forever, though, as you can join forces with Venom. Sort of. At points, you’ll choose which character to play as, taking yourself on different paths through the game. Makes sense, given that Venom is more interested in a ‘final’ solution for Carnage than Spider Man is. On top of the pair, you can also summon in other heroes to help as you pick up their tokens. You can bring in Captain America, Cloak & Dagger, Firestar, Black Cat, and more to help. If you’ve played the game, you know that any back up you can get will be vital.

Each character has their own short theme music. You get a range of heroic, unsettling, and power tracks. They create an interesting effect as you’re dealing with an onslaught of tunes that seem to hype up your enemies’ power, though. They create a kind of musical shift where you’re the one who’s overpowering the enemy, and if only for a moment, the enemies are who should feel afraid. It’s like the moment in Super Castlevania IV when Dracula’s music switches to “Simon’s Theme”. You can feel that you’re turning the tide from the music alone. You just don’t do it for long, here.

That power only lasts so long before you feel like you’re the one in trouble again. The first time that feeling really hits a fever pitch is during “Decisive Dance,” which plays in the nightclub stage, The Deep. Pitting you against a pair of tough bosses as dance club lights blink on and off, it feels like the frightful power of your enemies has reached its peak in the first of many battles that will have you juggling several strong foes at once. It’s just this wall of unrelenting, ruthless guitar that feels like it’s always on the verge of bowling you over. It’s fantastic boss music, and really captures that feeling that the villains will win at any moment. That you’ll die with the slightest misstep.

The song played a few minutes before when you fought two idiots with umbrellas as bosses, though. It steals a bit of its impact in this moment. However, The Deep still feels like an incredible moment in fear and exhilaration in Maximum Carnage. The bosses, the lights, and the music create this sense that you’re in trouble, but that you might pull through if you keep on fighting. It’s a bit of a shame they used the track before this moment. It would really shine if this was its first appearance.

Maximum Carnage doesn’t have a whole lot of music in it, but what’s there hits hard. It captures that wild energy that comes from being outnumbered in a fight. The mixture of terror and adrenaline that the heroes would have been feeling as they faced these monstrosities. It was an impressive feat, not just to pull off on the consoles, but also in creating a kind of fear and unease within a pulse-pounding beat ’em up soundtrack. I’m not saying that creating fear in a frightening game is easy, but making the player feel a twinge of fright in a game where they beat up hundreds of people is pretty impressive.