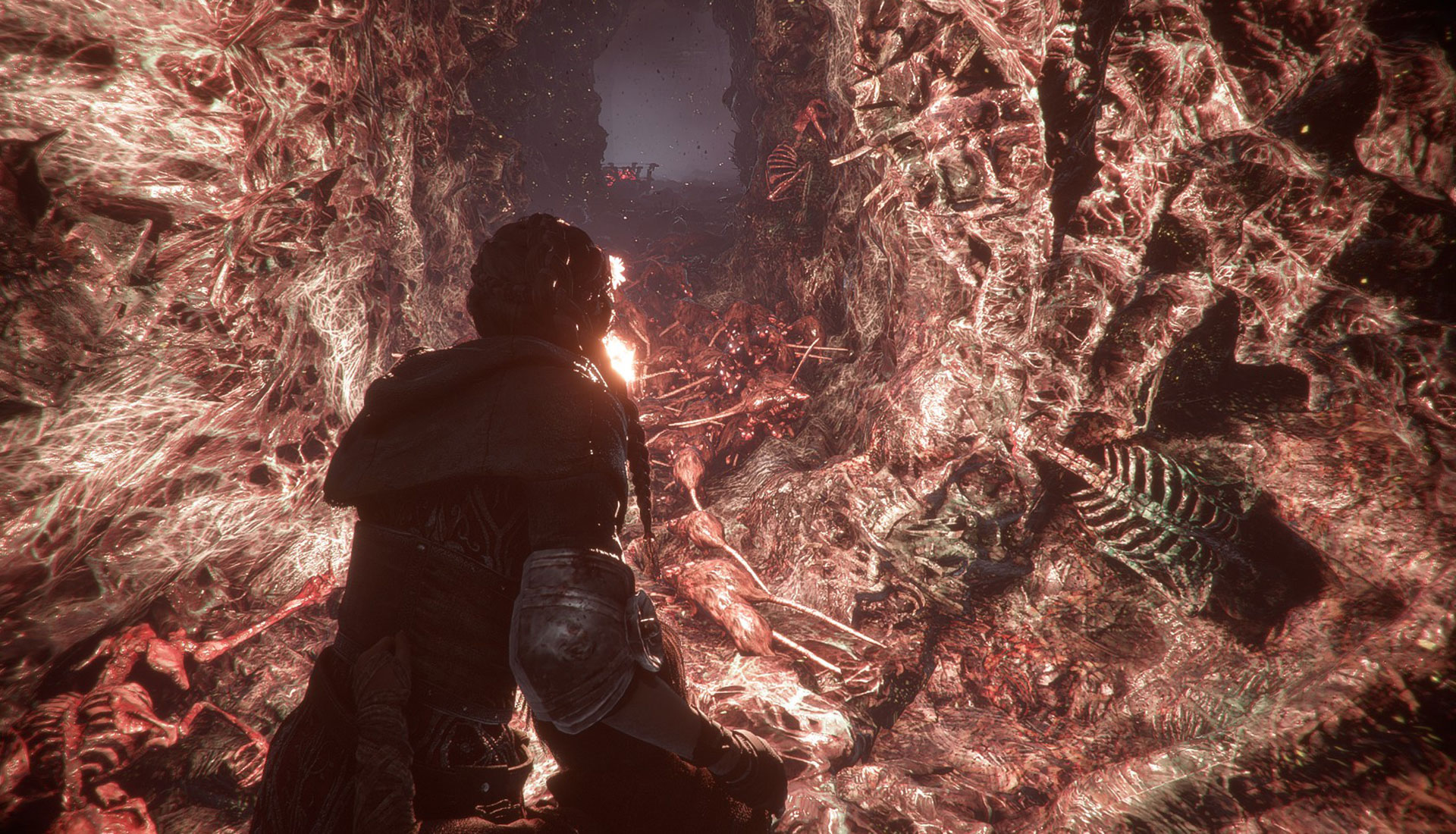 On my list of story turn-offs, “child in danger” is just below “Jesus is the answer” and “teenagers written and portrayed by people in their 30’s.” It’s not that I hate kids. I happen to have been a kid once. It’s just cheap. It’s an easy way to ramp dramatic weight without actually having to write a character with more dimensions than just being young. And you can bet 95% of the time there will be no payoff. Just like the family golden retriever, odds are that the kid will have plot armor thicker than an M1-Abrams starring in a DC comic.

So you can imagine my relief when I ran into A Plague Tale: Innocence’s first guard, got caught, and was immediately punched in the face and stabbed. Thank God, now I can actually give a shit about these characters. Fearing for your life is kind of important in your game about plague rats devouring the world and turning it into black slime.

A Plague Tale: Innocence takes place in 1349 France, where plague ravages the countryside. While this is historically accurate, fear not, this isn’t one of those boring, “cough up blood while your body devolves into a puddle of boils and pus,” plagues. This is a baller rat apocalypse plague. Ceaselessly bursting through the walls and floor, swarms of vermin cover the world in a black, chittering blanket of flesh. They pour over each other in an unending horde. The only thing holding them back is their fear of light, causing them to ebb and flow in a way that truly embodies a tide. Though individually mindless, their unending hunger seems to serve a vile higher purpose. You still get the regular ol’ pus and boils plague if they bite you though, so this really is the darkest possible timeline.

You play as Amicia, a 15-year-old girl of noble lineage. Far from the concerns of common folk, the story begins with Amicia going on a pleasant stroll through the woods with her father and dog named Lion. After some light tutorializing and learning just enough about the father to care if he tragically dies in the next scene, Lion runs off into the woods and is eaten by the ground. Amicia gets there just in time to witness the final moments of her whimpering pup, letting out one final yelp as he is dragged into the earth and turned into a blood volcano. Wow, killing the kids and the dog, eh A Plague Tale: Innocence? You really aren’t pulling any punches.

Rushing back to her Chateau, we’re introduced to Amicia’s five-year-old little brother, Hugo. Hugo is sick with a mysterious disease called the Prima Macula, which has resulted in him being very sheltered from the outside world. So sheltered that he hardly even knows his own sister. Soon the soldiers of the Inquisition show up (for there is always an inquisition in fantasy worlds), and start murdering everyone. From here, the game is primarily about keeping the young boy safe as you try to avoid the Inquisition and find a cure.

Gameplay is simple, but A Plague Tale: Innocence does a lot with what’s there. Amicia is only armed with a sling and is practically attached to a small child, meaning combat won’t be your main focus. Now stealth horror games are nothing new, but there are significant differences in A Plague Tale: Innocence that should stand out to any seasoned veteran. For example, you can’t just walk up behind guards and knife them in the throat. Also, despite having a plethora of rocks, you can’t just toss pebbles to distract guards. Lastly, despite being made of cloth, your sling makes noise when being used, meaning you can’t just throw rocks from a bush with impunity. Those three things right there should be enough for you to at least consider buying A Plague Tale: Innocence.

The game isn’t all sneaking about, and there are actually a fair number of combat sequences that require you to plan out your attacks and switch between various ammo types. It fits well into the story, showing Amicia’s growth from naive young girl to seasoned killer, all to protect young Hugo. Or is it? A Plague Tale: Innocence does an admirable job of exploring the different facets of each character’s motivation. The Inquisition aren’t JUST bad guys, Amicia isn’t all noble self-sacrifice, and Hugo isn’t just a sweet little boy. It’s not Citizen Kane, but a big step above standard video game writing.

Speaking of character arcs, Hugo and Amicia aren’t alone in their journey. A Plague Tale: Innocence slowly builds a ragtag group of lost children. They are far from vestigial plot points, as each character has a skill that comes up in gameplay. One character can pick locks, while another can sneak up behind guards to snap their necks. You don’t get to pick your companion, but this specialization adds some characterization that gets you invested in their fate. Most importantly, the looming specter of death makes you genuinely care if they live or die.

If I were to pick out one aspect that best defines A Plague Tale: Innocence, it would be defying expectations (no, not subverting them, shut up). We’ve come to expect certain things from our games. We just accept that narrative games have stripped down gameplay. That escort quests are tedious and pointless. That child characters won’t die. That puzzle games won’t have combat. That we have to end on a cliffhanger. And then comes a game like A Plague Tale: Innocence. It’s not perfect, but it’s a shining example that we should expect more.

On the other hand, much of what there is to love about A Plague Tale: Innocence is not so cerebral. The game is macabre, gruesomely gorgeous, and genuinely terrifying. The way that the rats swarm, flow, and engulf strikes a primal chord. There was one point in the game where I came across a corpse half bathed in light, with the bottom half engulfed in a wave of rats. As I moved the light closer and the rats scurried away, they exposed a bloody skeleton beneath. It was genuinely sickening to see the area where light goes to shadow transition from flesh to bone. It’s just one small example of a game that is so steeped in horror that even a soulless veteran like myself had moments of genuine glorious disgust and revulsion.

I also rarely notice soundtracks, but I’ll be damned if A Plague Tale: Innocence didn’t make me take note. Masterfully scored by composer Olivier Deriviere, the soundtrack is as much of a character as Amicia or Hugo. It makes already inherently tense combat even more riveting, the swarms more terrifying, and the touching moments more heartfelt. It matches the tone at every turn, truly enhancing the experience significantly.

I do need to bring up one aspect that does prevent the game from being a perfect 5/5. Unfortunately, I did find the puzzles a bit weak. I was never really stumped, and a lot of the larger scale puzzles were too heavily scripted. It’s as if they were afraid that players wouldn’t get how to do it, so they just built how to solve it into the dialogue. It’s not enough to ruin the experience, but it is an area for improvement.

I went into A Plague Tale: Innocence expecting a game that would wow me with it’s bitchin rat physics. What I got was a story that moved me. A Plague Tale: Innocence genuinely earns its title. This isn’t a story that uses children to tug at your heartstrings but tells a tale of tragedy through the eyes of those most vulnerable. In the face of unspeakable horror, death, disease, and competing political forces, innocence is quickly stripped away. And yet, somehow, a flicker of childish wonder endures. In the quiet moments, we see Amicia and Hugo for what they are: children. They steal away moments to laugh, to play, to dream. Moments all the more meaningful in the face of all that stands against them. A must have for any fans of horror with heart.