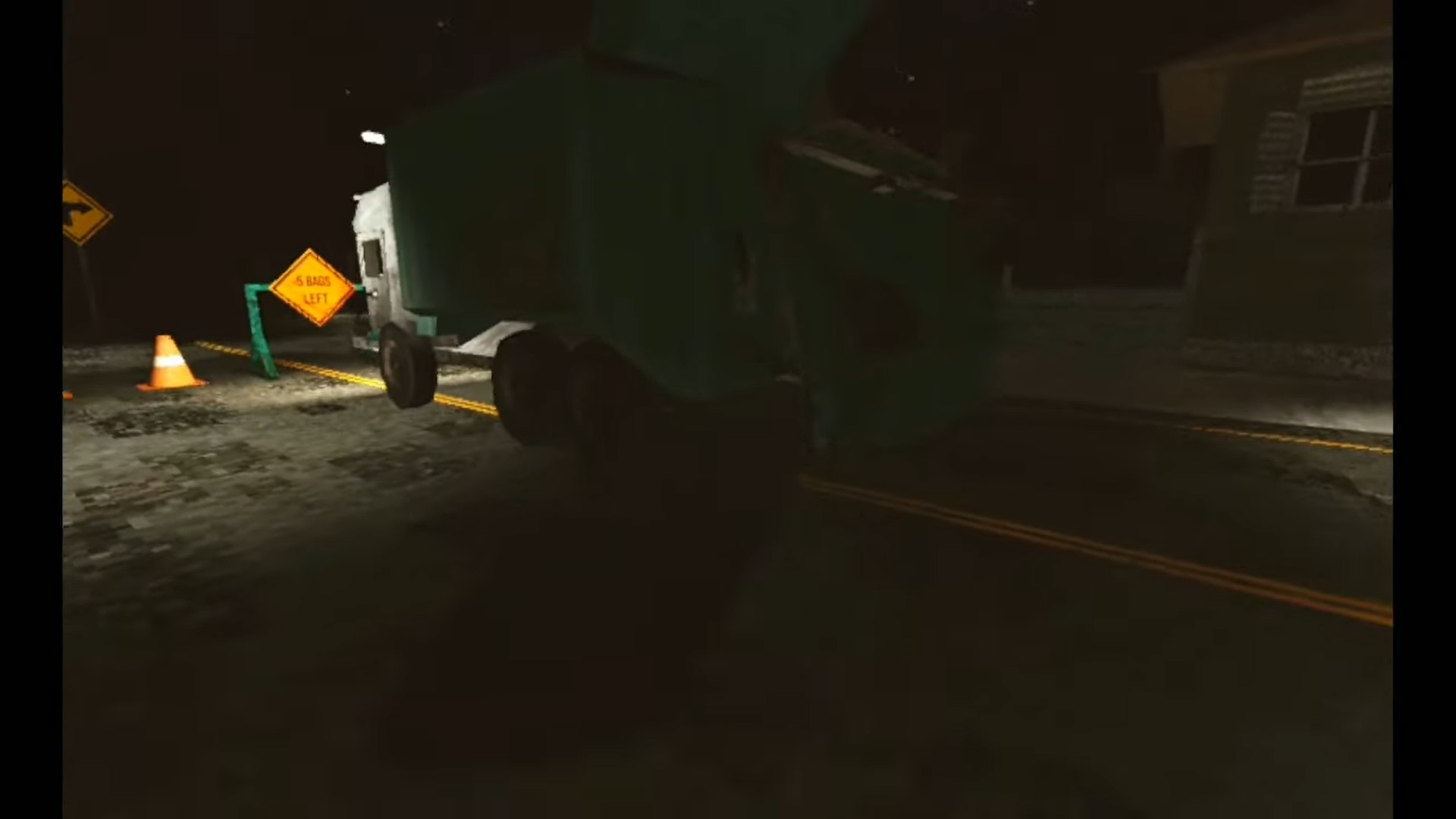 Cleaning Redville captures a very particular kind of unease. There’s something about empty streets as you’re driving alone far, far too late at night. There’s a nagging kind of fear when most of the world is asleep and you’re wandering around. Unless you make a habit of roaming the town in the middle of the night, you likely won’t feel these fears too often, though. For folks who have to work a late night job, though, this game carries a special kind of terror. The kind you can’t escape if you want to pay the rent on time.

In this game, you’re in charge of trash collection. It’s a small town, so it’s not a huge job. You just need to drive your truck down a few streets, get out, and pick up the garbage bags that are lying around. These people are definitely jerks, though. The garbage bags are all over the place. They’re in front of dark alleys. Under random streetlights. It’s weird. Maybe they’ve got some reason to feel contempt for our trash collector? I don’t know their reason for being this way, but it means you’ll be walking around dark neighborhoods looking for errant bags a whole lot.

Cleaning Redville lets you soak in its atmosphere while you do this. It’s a fairly quiet game, with little to hear besides your own footsteps when you’re walking or the sounds of your truck when you’re driving. You spend a fair amount of time doing both, so you get used to hearing the hum of the engine or the tap of your feet. On the silent streets, those sounds gain this discomforting quality. They echo in your ears as a constant reminder that you’re all alone. There’s no other sounds anywhere. No one else awake to make noise. So, each sound, however normal, is a booming reminder that you’re all by yourself.

Your imagination will start to toy with you in that near-silence. What if everyone around you is dead? What if something is lurking in the dark? These kinds of ideas will keep gnawing at you every time you step out of your truck. Maybe you’re tougher than me and you can push those thoughts down. As I play, though, I find myself hurrying to grab each garbage bag to toss into the truck. I glance around as I push the lever to compact the trash (you have to break it down each time you add a few bags). I keep telling myself that I’m just on some normal streets. Nothing to be afraid of. Probably.

This may not make Cleaning Redville sound very exciting. Many horror games start in quiet places and move into something frightening. Plus, as this is a horror game, you KNOW that something scary is likely going to happen. You’re not going to try to dismiss your fears because they’re well-founded. Something is definitely going to happen while you play a horror game. It’s not like in the real world when you’ll often have to put your fears aside and just keep walking or driving those dark roads.

This is a weirdly specific fear that this game preys upon, though. While you do have that horror game unease, there is also that fear that most late-night workers know. Doing a job feels very different at night. I only ever had one job where I had to deal with this. It was an all-night grocery store, and I had to be there around six in the morning. Not super late, but I had to be walking there around five if I was going to make it. The shortest route was through a small path in the woods, too.

Cleaning Redville reminds me of walking down that path every night. All I could hear was the crunch of my footsteps as I walked through the ice and snow. The trees felt like they pulled in close as moonlight cleaved through any gap in the branches it could find. The shadows grew long and sharp under that broken glow. My steps seemed to echo through those woods. Sounds didn’t come back to my ears quite right. I kept seeing strange movements as I walked. There was never anything there. Nothing ever happened to me. But it took everything not to run through those woods every night. Hell, I was actually worried that running was going to cause SOMETHING to finally appear.

When you work late, you’re often tired and alone. The silence can imply many things to an overactive imagination. You know, logically, that you’re probably safe. But you might not be. And that doesn’t have to be anything supernatural, either. What if it’s a mugger? Some dangerous person hiding among the trees? There’s lots of realistic stuff to be afraid of in the dark. It’s why I don’t wander the roads at night often. When I had to work, though? I didn’t have a choice.

That’s what I felt all through Cleaning Redville. In other horror games, you often wonder why the protagonist doesn’t turn and flee. In this game, I know why they aren’t hiding. They have to do a job. As scared as they are, they don’t have any choice if they want to eat or pay the rent. You HAVE to tell yourself it’s all in your head because of how much you need that paycheck. You can’t exactly call in scared, right? And if you do, you won’t get paid for that day. So, you steel yourself and you keep pushing on no matter how frightened you are. Even when your fears turn out to be justified this time.

Cleaning Redville takes me back to many dark, fearful walks through a frightening path. I hated that walk, and don’t even like thinking about how it made me feel. But I didn’t have a choice if I wanted to get to work on time. This game captures that feeling of having to press on into the lonely, scary night because you have bills to pay. When there’s no food in the fridge, you don’t have the ability to give into fear. You have to stomach it and move on. It’s a very real take on a fear most late-night laborers know all too well, and one that brought back some memories I’d rather have stayed forgotten. 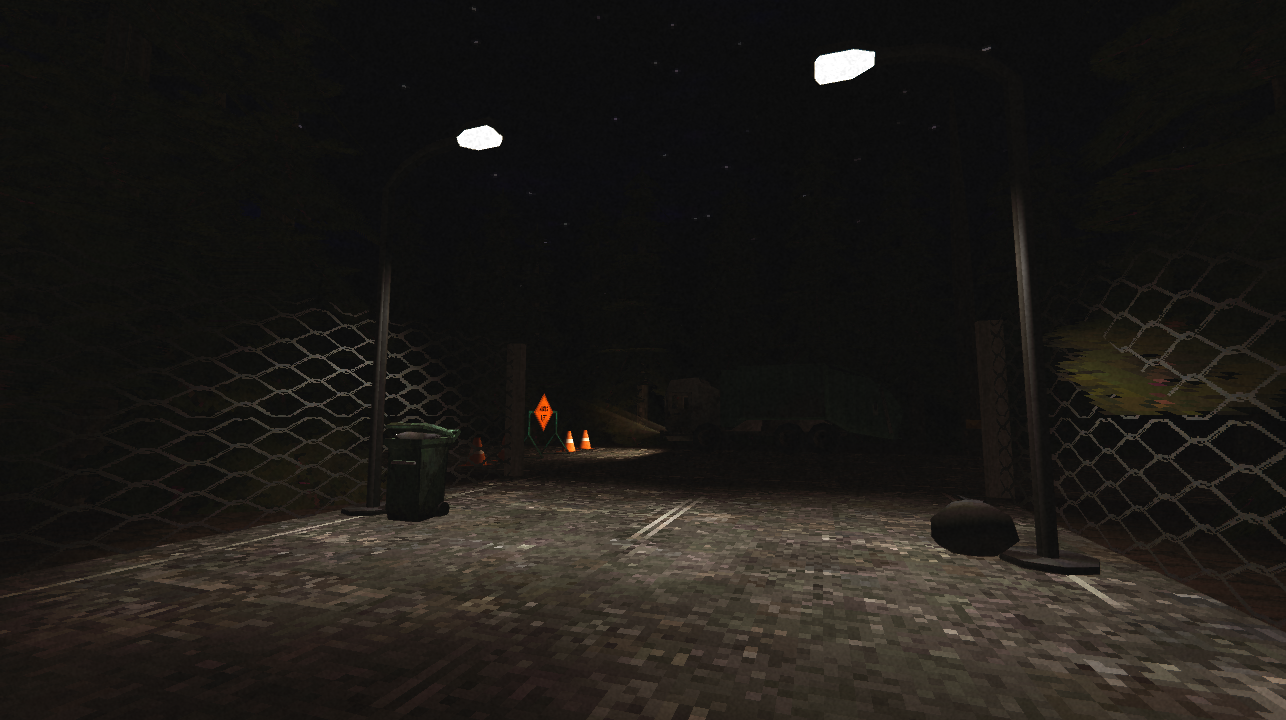