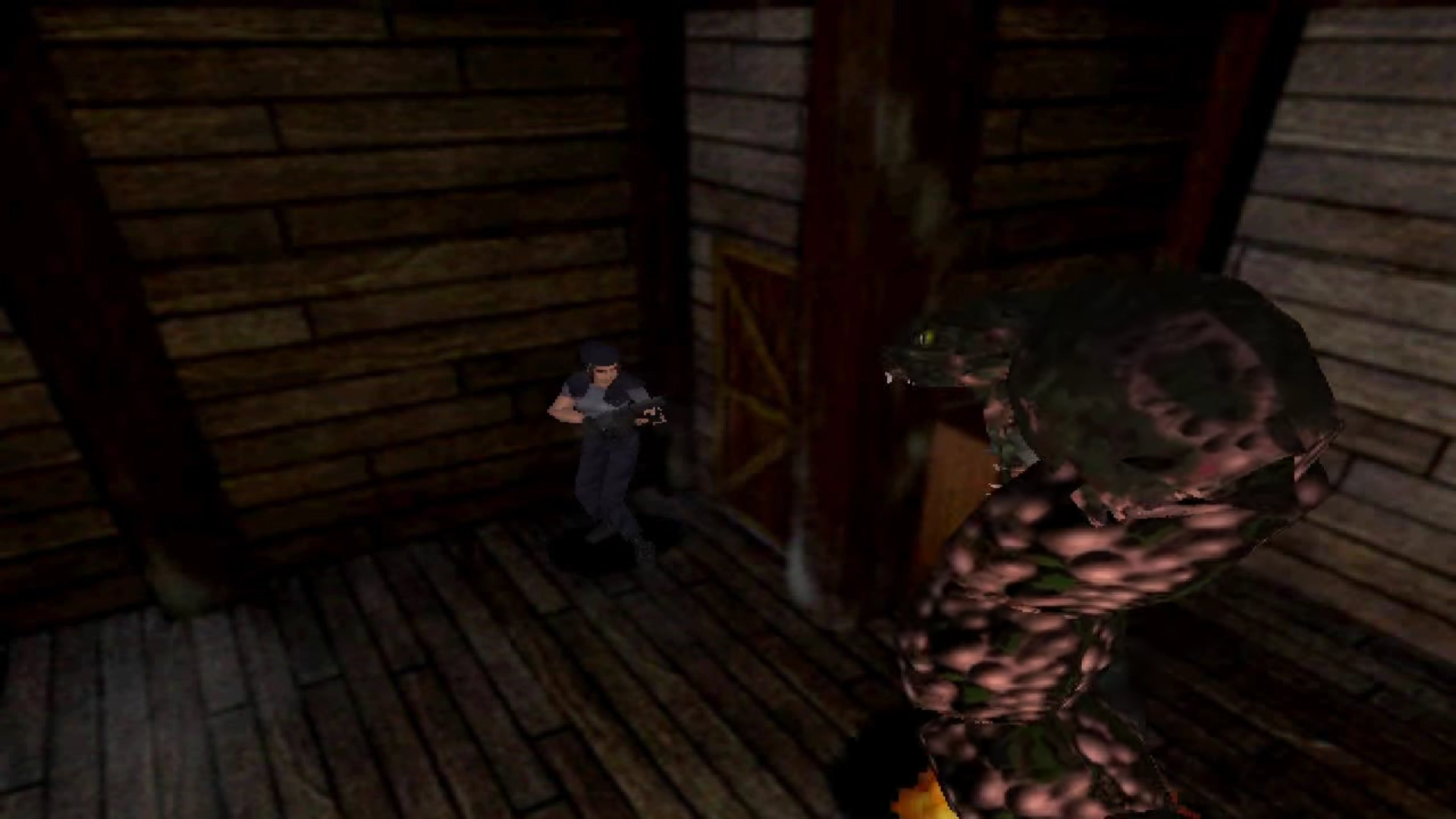 Saving is a moment of relaxation and peace in a horror game. A seemingly-insignificant one. I mean, you get a few seconds of the save screen, a moment of the game saving, and then you’re dumped back into the action. However, that act of saving is what keeps you from having to escape from your past horrors again. Every victory, every near-miss, and every recovered item is now yours forever. A few trials are behind you permanently. Which is why Resident Evil made it hard to save – a clever move I’m still impressed by 25 years later.

Most games let you freely save. Folks only have so much spare time, after all. Plus, it’s a real drag to have to run through the same hallway filled with undead over and over again because you got instantly killed by a hunter an hour later. Saving is often the only thing keeping me going. That feeling that, no matter how bad that last event was, at least I won’t have to do it twice.

That said, the ink ribbon may be one of the most ingenious items in the Resident Evil series. For those who don’t know, you need an ink ribbon to save your game throughout many of the early games. They were a common enough item, so it wasn’t terribly likely you’d run out of them. It was a finite amount, though. Folks like me, who typically save constantly, now had to be more careful about it. I’m also the kind of person who hoards and frets over finite items, worrying I’ll run out at the worst time. So, their effects hit me twice as hard.

Only being able to save sometimes can be an issue, sure. It’s a real drag to have to fight a hard boss all over again. It’s annoying to have to constantly hunt down the same key because you died after grabbing it. Even so, the ink ribbon adds an undeniable pressure to the game because you can’t just save every time you accomplish something. If you do, you’ll swiftly run out of ink ribbons and have to play through massive chunks of the game without saving. Likely at the end, when it’s the hardest. It adds some extra nuisances, sure, but its ability to enhance the game’s fearful mechanics makes it a worthwhile trade.

This is how I tend to play through horror games where I can save. Fatal Frame leaps to mind. Whenever I fought a ghost, I’d rush back to a lantern and save again. I was afraid that I’d have to do a fight multiple times, so I’d always rush back to that save point. It also helped lessen my fears a bit, as I could always get this moment of calm at the lantern before I was among the tortured spirits again. It also lowered the amount of risks I took while walking around. I’d only have to worry about fighting a ghost or two safely, as I always had a safety backup to fall back on. I could even reset if something scared me really bad, knowing I’d only lose a few minutes of progress.

Constant saving allowed me to mitigate my fears. I’m a coward at heart, I guess. Resident Evil kept players from doing that with the ink ribbons. You couldn’t just spam saves in order to lessen the impact of its horrors. Can’t reload a spot multiple times until you dealt with it perfectly. You couldn’t easily reset the game if you had a bad run. Can’t minimize risk. Whatever happens, you need to just roll with it. There’s no going back to an old save without a big cost. Don’t expect to spend much time on that cozy save screen feeling relief wash over you, either. It sure made me appreciate the times I COULD save, though.

The ink ribbons turned every run at the game into a gamble. If you’ve done especially well in a section, should you use one of your limited ribbons? You just beat a boss, but you only have a few ribbons left. Should you save? You’ve been doing really well getting around, so why not see if you can push yourself just a bit farther without saving? I was always debating the risks I was taking on by saving or not, which added a further tension to exploring the Spencer Mansion.

The ink ribbons also heightened the effects of all of the various mechanics and systems of Resident Evil. Fighting with zombies is a tense struggle, as the randomized damage they take to put down and their relentless attacks made each encounter important. If you can just save and reload until you’ve dealt with a zombie easily, it takes away some of that fear. If you can’t easily save, you have to decide you can live with a fight going poorly. Or if you do really well and then get nearly-stomped, do you keep going in your weakened state?

Whether you’re weak or strong, you have to keep worrying as you progress. How long until I screw up? How far do I have to limp in this injured state? I’m going to lose so much progress if I die. So, the pressure mounts on you with each new encounter. Or the dogs show up, throwing you into a panic because they move fast, are likely to really eat your resources, and they might kill you, costing you an hour of play time. The horrors you’ve overcome will be put right back in front of you again if you fail. So, not only are you afraid of your foes, you’re frightened of the things you’ve already beaten rising from the dead to face you again. Which is kind of on-point for this game.

You feel Resident Evil’s lack of ammo and healing items more keenly here, too. Can’t just save/reload until you take an enemy down with the knife without taking damage. Don’t want to go back because you wasted a bunch of bullets. Aren’t sure if you should save because your ink ribbons are getting low. You’re forced to face these problems head-on rather than abuse the save system to get around them.

Death means much more when you’re due to lose that progress, too. Suddenly, a single bad encounter in a hallway has a high cost. Miss-gauge your distance as you rush around a zombie and you’ll be in big trouble. Running into foes is not only scary because they’re monsters, but because of what they can take away from you. Even when there’s no foes around, you wander the mansion with even more fear because death has a very high cost when you haven’t saved in a while.

I was a ball of tension as I wandered through Resident Evil. I was worried about the enemies as the game had done a great job of creating frightening foes. Their ferocity felt so much more real when I had a lot to lose, though. Getting jumped by a rotting zombie, its teeth sinking into my neck, is scary on its own. Adding this fear of how much I stand to lose in-game made it so much worse, though. I was afraid of having to face old foes again. Fearful of doing worse on the next run. Scared of how doing worse would affect me in the long run of the game.

Ink ribbons were an ingenious addition to the game, forcing me to take additional risks that added a further tension onto Resident Evil’s already-fearful play. They made me face my mortality a little more keenly, and take risks that added to my nervousness as I explored the game. They make every one of the game’s fearful quirks stand out all the more, and helped make a terrifying experience even more frightening.