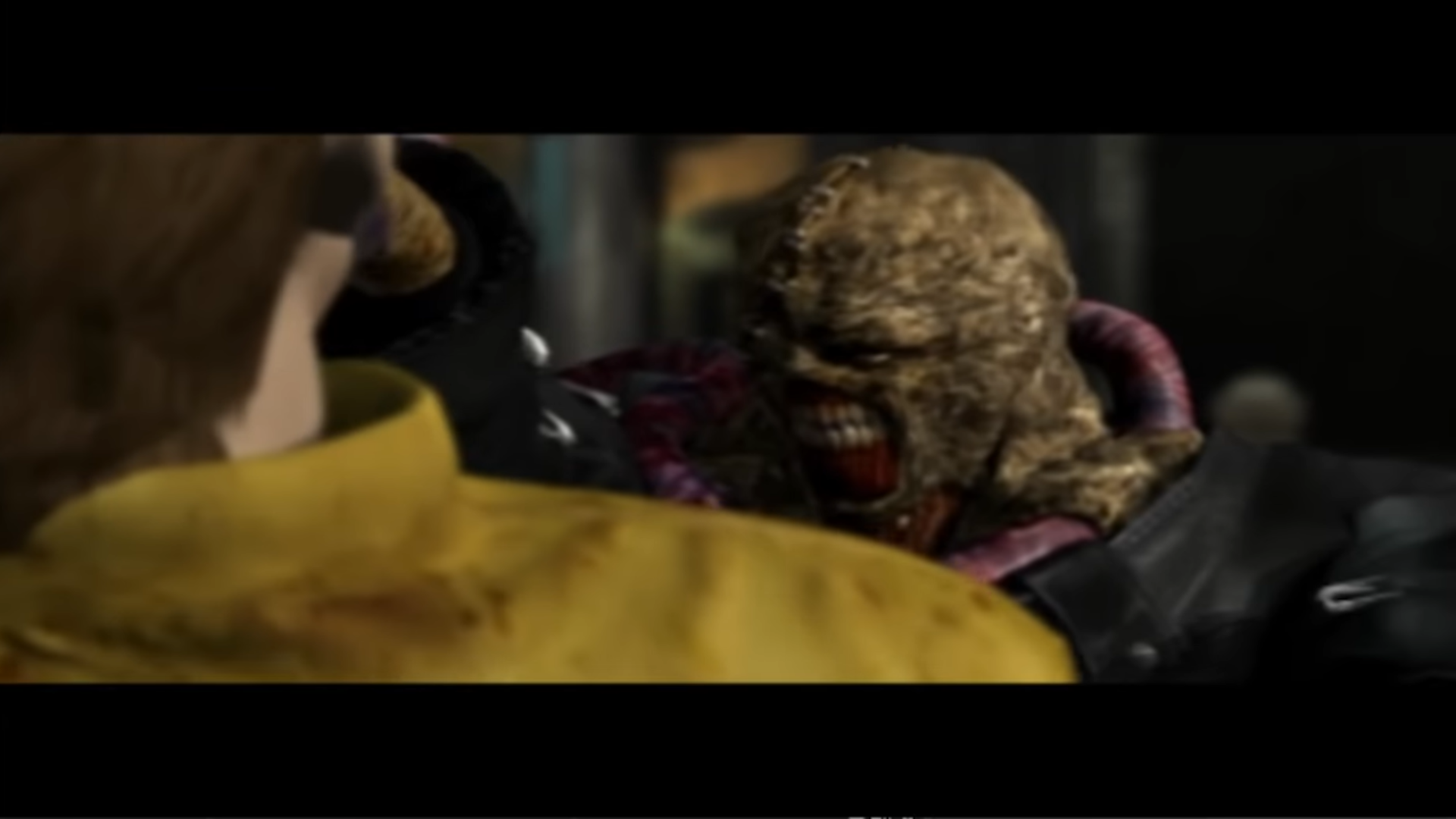 If you’ve been looking forward to being chased by Lady Dimitrescu in Resident Evil Village, you may have fond memories of other stalker enemies throughout the series. The Resident Evil franchise has a long history of monsters and creatures that chase you unrelentingly. That refuse to go down no matter how often you kill them. That make you want to turn and flee rather than fight. In games where you’re already afraid of dealing with the most basic enemies, they bring further difficulty and moments of panic as you struggle to survive and progress.

None have ever done this as finely and terrifyingly as the ruthless antagonist of Resident Evil 3: Nemesis. I hope our dear lady takes more inspirations from this unforgettable creature from this fantastic horror entry from 1999. Nemesis’ ability to frighten really hasn’t been matched since.

Nemesis has one job in this staggeringly-good PS1 title: killing S.T.A.R.S. members. It’s something the creature excels at, honestly. That’s because it’s everything a zombie isn’t: fast, persistent, unpredictable, and well-armed. Nemesis can move faster than Jill (the game’s protagonist), it will tail the player between areas, it can back off or begin attacking in surprising places, and it’ll start firing rockets at you if you put it in a bad mood. It’s not really something you want to tangle with in a game where you’re already short on ammo and supplies.

Using this beastly foe, Resident Evil 3: Nemesis completely changed the Resident Evil formula at the time of its release. Before this point, the Resident Evil games moved slowly and carefully. You can, for the most part, dodge or attack basic zombie enemies with plenty of time to adjust tactics. The occasional dog might throw the player into a panic, or a quick-moving Hunter might ruin your day, but a few shotgun shells would put you in the clear. Outside of the occasional boss battle, things tended to move at a pace where you had time to think and reposition.

Nemesis was something else, entirely. You’d run into this terrifying brute throughout your journey through Raccoon City and the surrounding areas. It was a surprise if you hadn’t played the game dozens of times, as it showed up seemingly at random. You’d just enter a room or walk down a hallway, and Nemesis would be there. When it showed up, you were in for an encounter that was faster and more dangerous than anything else like it.

If you somehow managed to take Nemesis out, surviving its onslaught of rockets and punches (while also being willing to expend the precious ammo you’d need to do so), in a few moments, it would regenerate and chase you again. There was no gimmick to take it down and get it to leave you alone. No boss fight where it’d leave you be, afterwards. Just an unpredictable wall of muscle and explosives that could appear and disappear when you didn’t expect it.

Where most zombies would lumber your way, Nemesis would rush you. If you’ve ever tried to just escape the thing, you likely have a memory of bursting out a door, Nemesis right behind you. I mean DIRECTLY behind you. Like, he’d be touching you’d been even a millisecond slower. My heart was in my throat for each of these chases. It was much, much faster than the player, making every flight a terrifying experience.

Don’t expect to escape for long, though, as Nemesis would pursue you through different areas in Resident Evil 3: Nemesis. This isn’t ground-breaking these days, but this just didn’t happen in the PS1 Resident Evil games. In the previous games, trouble didn’t follow you once you stepped through a door. You weren’t exactly safe in the new area, but you were safe from whatever was in the previous room. So, after two games of being comforted by the sound of that door slamming behind me, I found myself chilled to hear the door open back up again, followed by Nemesis grumbling “STARS,”.

My first time playing the game, I was sure it’d back off if I entered a save room, though. A part of me was positive its position would reset or it’d lose track of me. I was still clinging to this hope that save rooms and door transitions would force it to leave. Like the game’s coding just wasn’t advanced enough to have it continue to follow me. That the developers would make it back off once you got to a save area because they felt bad for the player or something. I stood by that door for a good long time before reopening it. The scream I loosed when Nemesis was directly outside, right on top of me, got me in trouble with everyone in the house that night.

Still, he COULD have been gone. Nemesis seems to back off at strange times throughout Resident Evil 3: Nemesis. Its appearances feel just as random on those first few playthroughs of the game, too, always showing up when you start to feel safe. This seemingly-erratic behavior made it seem like you never knew when the beast would come crashing through a window or spontaneously stop chasing you. The result was that I always felt like Nemesis was somewhere nearby, only moments from coming after me. It made me just as afraid of the moments it wasn’t there as the moments it was.

This flies in the face of some of the other stalkers that have appeared throughout the series, especially Mr. X in the Resident Evil 2 remake. Mr. X is lumbering and continually dogs you, but he rarely backs off. It doesn’t matter much since he’s slow and useless, so you can usually dodge him around a desk or something, but it serves to make his appearances more annoying than anything. To accomplish anything, you have to kite him out of your way. And he’s ALWAYS getting in the way, but that’s honestly the most trouble he causes.

When Nemesis appears, there’s no leading it away. No accomplishing anything while it’s around. It’s just a blind scramble to stay alive for a while. Because of that, it doesn’t tend to stick around long, thankfully, which keeps it from getting annoying. It also allows the game to create a mystique around the monster, as you don’t know why it appears or disappears. For Mr. X, you always know he’s around, and since he’s an annoyance at most, he irritates you more than frightens you. In Resident Evil 3: Nemesis, you never quite know what’s up with Nemesis, but you know you’re in for a heart-pounding flight when it gets back.

Getting this balance down may be the most important part of why Nemesis is so frightening. Having a fast, dangerous, constantly-regenerating monster in a horror game is a good choice, but knowing when to have it chase the player, and when not to, is more important. A foe that powerful can wear the player down, making them feel like they’re constantly outclassed and incapable of progressing. This can be frightening in small doses, but infuriating if it’s all the time. Nemesis skirted this line perfectly, and all while bringing new challenges and terrors to Resident Evil.

A good, powerful stalker in a horror game can take what the players feel they know about the game and toss it away. It can force them out of their comfort zone and force them to work while panicked. It can give them some of the most exhilarating moments in horror games. When designed as carefully as the antagonist of Resident Evil 3: Nemesis, you can have a stalker add new elements to the game and have the player frightening themselves with their expectations. Done wrong, and you’ll only irritate the player. Precious few enemies in the series have come close to this careful balance of game-upending terror as Nemesis. I only hope Lady Dimitrescu can come close to matching it.