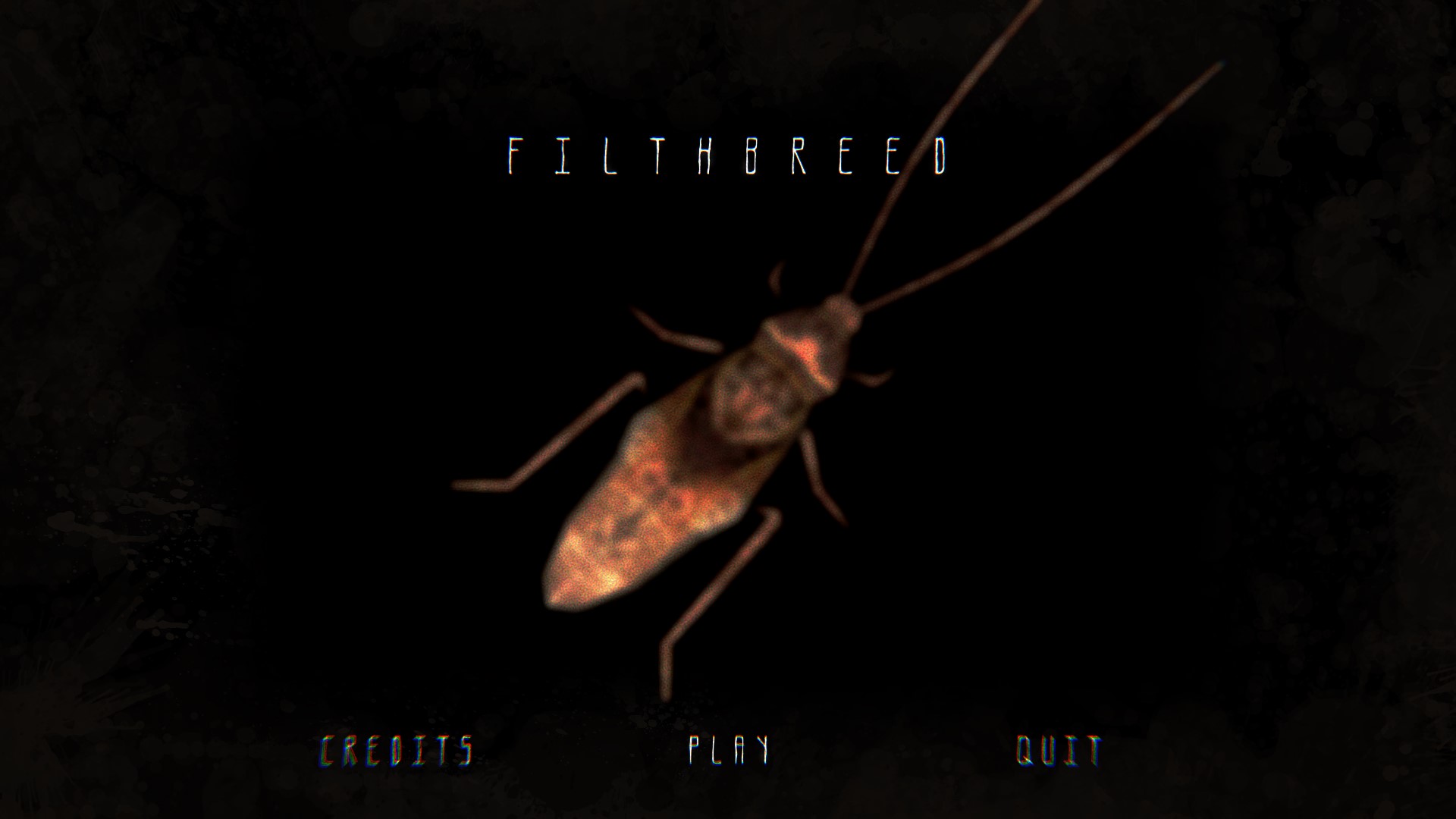 I had trouble finding a good title for the spotlight this week. With the recent Global Game Jam, there are a ton of games flooding onto the web. That being said, there’s not a lot I can say about a game made by three people in 48 hours. Luckily, this is also the week that the Haunted PS1 Demo Disk 2020 hit the itch.io storefront. I was planning to review the whole package, as I expected it to be some kind of meta-game where the demos slowly became more and more haunted. But no, it’s actually just 17 ultra-indie “demos” packed into one package. And most of those “demos” are actually just the full game. It’s got a great low-fi aesthetic, but other than that there’s not much to talk about. But hey! Some of these games are really interesting. So we’re gonna kick things off with my favorite of the bunch, Filthbreed.

The goal of every great horror game is to make you almost incapable of carrying on. There are five primary ways a game can instill fear in the audience. You won’t find this theory in any book, it’s just a conclusion I’ve come to after many years of thinking about it. You can startle, shock, overwhelm, disgust, or expose the player to a phobia. Startling is the easiest and most common. It’s the jump scare. Shut your mirror, bam there’s a dude behind you. Open a closet, and a zombie pops out. Shock is when you show the player something so extreme, it elevates the already heightened stakes. This is when you encounter a pile of dead babies in Outlast 2. Overwhelming the player happens when you introduce so much challenge that their brain overloads. The best example I can think of is the first village survival fight in Resident Evil 4. Phobias are the biggest dice roll. If you make a game/movie about spooky clowns, people that hate clowns will be terrified. People that don’t give a shit about clowns won’t care.

Disgust is the most primal, controversial, and grounded of the methods of eliciting fear. It’s when you show the player something they feel violates decency on a primal level. You have to be careful not to go so far over the top that it’s not believable. Pile of dead babies in Outlast 2? That’s shocking. Learning the fat priest has “blessed” the whole community with syphilis? That’s disgusting. It’s a fine line, but one that we can sense intrinsically. It’s also the hardest to defend to non-horror audiences. The primal revulsion it elicits tends to drown out any kind of reasoned debate. No one talks about the storytelling or cinematography of The Human Centipede.

Rather than rely on a bevy of jumpscares to elevate the player’s heart rate to a point where they close the application, Filthbreed instead tries to make you so unsettled that it’s difficult to bring yourself to carry on. Taking place during a rash of missing homeless people, the prime suspect is a Michigan truck driver named Louie Burton. After being ratted out by one of his partners, the police track his location to the headquarters of a local cult. You play as a rookie police officer, tasked with investigating said lair and retrieving the suspect. Once you get inside, you soon find a gun and are attacked by lanky insect-human hybrid monsters. As you press on, you’ll find notes and other strange objects that paint a disturbing picture of evil beyond human comprehension.

Filthbreed is short, and the gameplay incredibly simple. You walk through the dilapidated hallways of the ramshackle building, with the only real objective being to press on. You can hunt for clues in the form of notes and investigate your surroundings, but the game never actually tasks you with doing this. In fact, at any time you can just turn around and walk out the front door. You won’t get the best ending, but that’s your call. When attacked by the monsters, you’ll have to pull your gun out and shoot them a few times. There’s no healing in the game, but there aren’t really enough monsters in the game to make it an issue.

Filthbreed makes the most of its limited time. Every piece is tailored to make you as uncomfortable as possible. The environment so mired in filth that it almost feels like the blackened walls and soggy mattresses are assaulting you. The low-fi visuals add to this, as it’s impossible to distinguish just where each piece of grime ends and another begins. It’s like staring at a picture of a landfill; look hard enough, and you can pick out individual bits of discarded dinner or dead animals. But at a glance, it’s all just mountains of refuse. The shambling monsters add to this aesthetic, announcing their presence with a sickly rattle before emerging from the shadows. Once you do get to the game’s more surreal moments, the juxtaposition between otherworldly terror and grounded grime is deeply unsettling.

Even though the mechanics are limited, the weapon drawing/holstering system adds an extra layer of tension. You can’t investigate the environment with your gun drawn, meaning you’ll have to leave yourself vulnerable to collect notes, ammo, or open doors. It’s simple but effective. It makes you check your corners just one extra time before investigating a collectible. It’s something that most horror games wouldn’t manage without having a monster unexpectedly popping out of a nearby dresser. As a side note, I liked that it only took a few shots to kill the monsters. Horror games tend to focus far too heavily on making enemies that absorb a stupid amount of ordinance. Scare me, make me draw my gun, kill the bad guy, and then press on.

This is a hard one to quantify. As the game is so short, almost everything it does is effective. Ironically, Filthbreed doesn’t have many knits to pick. The most obvious problem is that the game is only about 10-minutes long. There are only three zones, five or six enemies, and about a dozen things to find. There are three endings, but only one is what I’d consider a real ending. The other two just require you to exit the building before the game is done.

The only other complaint I can really think of is that the same sunshine through blinds texture is used for like three different windows. It’s just in the same position, regardless of how I’m moving around the building. I guess it fits into the non-euclidian horror. There, I found my knit to pick.

I’ve said previously on this series that there are games with a lot of problems that wouldn’t be that hard to fix. The inverse is true for Filthbreed. Despite the only real problem being the length, it would be incredibly hard to make the game longer. Filthbreed is entirely designed around this brief runtime. Thematically, all of the scares and revelations and packed to ensure there’s never a dull moment. Mechanically, there’s only one extra ammo pickup, a handful of enemies, and no healing. The game would have to introduce a whole bevy of new mechanics to extend the runtime. While you might think to yourself that just adding a health pack, more ammo, or some more enemies isn’t that hard, it could easily break the flow. Knowing you can’t heal in Filthbreed ramps the tension even when the enemies themselves aren’t that threatening. Extend the runtime, and you’ll need more enemies. With more enemies, you will need to add a way to heal. With healing, those enemies suddenly become even less threatening. Suddenly, the whole game loses an entire element of tension. I’m not saying it can’t be done. I’m just saying it’s a far more meticulous process than you might assume.

If Filthbreed does see expansion, I’d recommend introducing new areas. Presently, each of the three zones feels distinct both visually and mechanically. I don’t think that a few extra rooms full of cockroaches would make the game significantly better. However, a whole new zone full of maggot-infested food might. Not all of these new rooms need enemies. The ones that do have enemies should have new ones. The overall goal should be to expand Filthbreed‘s personality without diluting it.

I’ve so far avoided the obvious comparisons between Filthbreed and the Condemned series. I’ll admit that the visual and tonal similarities are what got me to click on Filthbreed in the first place. The reason I’ve avoided it is that the game should be able to stand on its own. I shouldn’t like Filthbreed just because it’s aesthetically similar to something else that I like. And it does. Filthbreed is a great micro-game. That being said, it’s unlikely that Monolith/Warner Bros./Sega will ever make a Condemned 3. It’s going to be up to indie games to carry the hobo-grunge torch and carry the series on in spirit. But hey, maybe that’s how we light a fire under the industry’s ass. If a million people start downloading and playing new grimy bumfight detective games, maybe it’ll once again seem “marketable” to the people with all the money. What I’m saying is, if you don’t download Filthbreed, you’re the reason we won’t see another Condemned game.