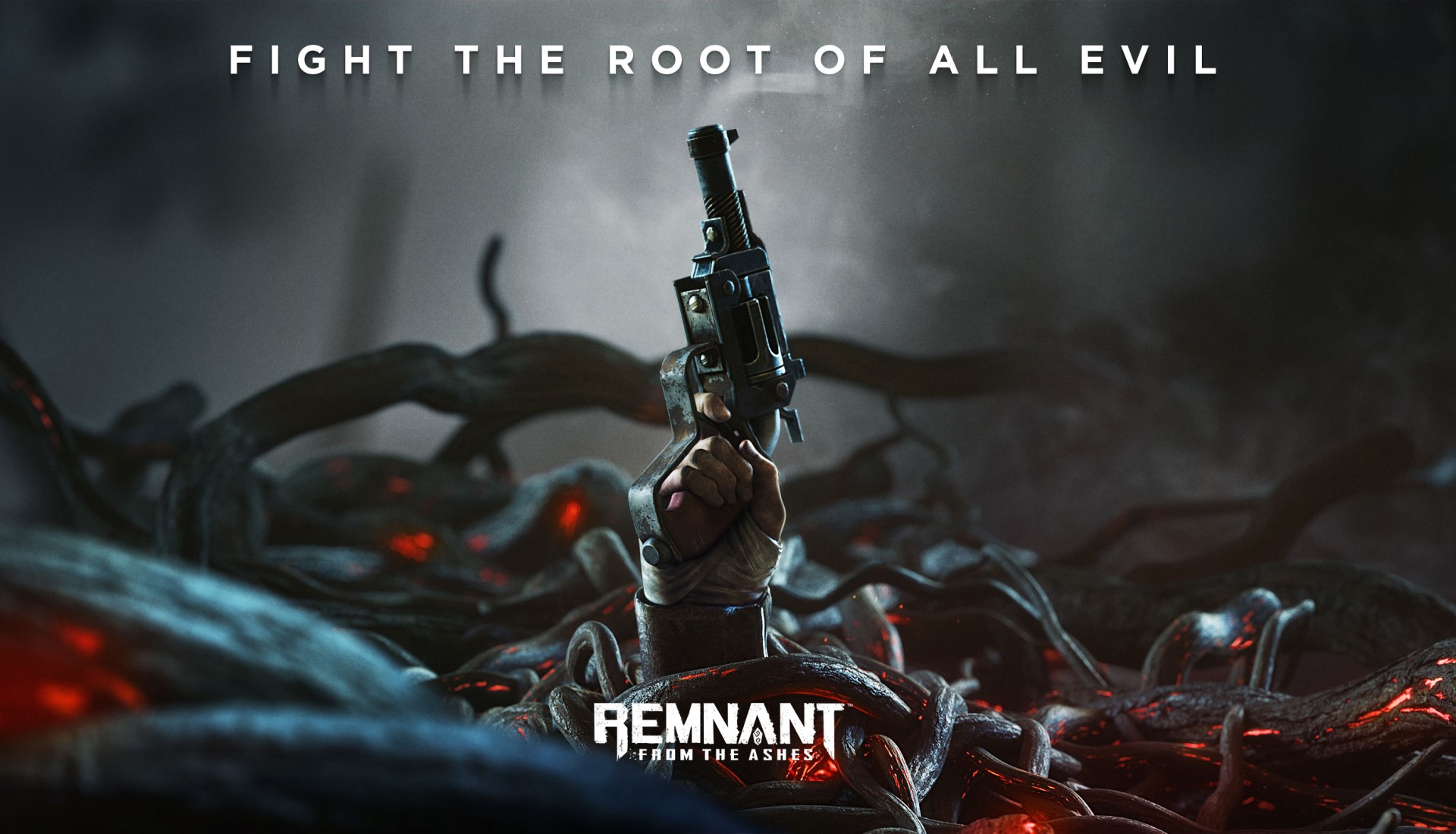 REMNANT: FROM THE ASHES Review – New School Souls With That Old School Kick

I’ve said this before, but we really need to stop using Dark Souls as a shorthand for all challenging action games. I see a lot of people referring to Remnant: From the Ashes as Dark Souls with guns, and it’s really not fair. Aside from the challenging combat, dodge roll, stamina bar, recharging healing items, checkpoints that respawn all enemies, three player co-op with scaling difficulty, threshold status effects, gigantic boss fights, fog gates before boss fights… okay, maybe it’s a bit like Dark Souls. Except with guns. Yet despite being an easy shorthand comparison, the Dark Souls label comes with a lot of baggage (for better and worse) that Remnant: From the Ashes simply doesn’t carry.

For those of you that don’t know what Remnant: From the Ashes is, let me welcome you to the deeper side of gaming. Somewhere beyond the shimmering surface of AAA shooters and profitable nostalgia bait is a Mariana’s Trench worth of scaling quality. This is where you find the dreamers. There’s a sweet middle-spot here, around the second trophic layer where you can still see the sun and life grows without sucking thermal sludge from the billowing pipes of unity assets. Usually studios around 20-60, experienced from previous projects, but still with enough vim and vigor to make something unique. Or at least the hottest take on a beloved concept.

That brings us to Remnant: From the Ashes. Garnering a lot of buzz from the nerdier side of the internet, Remnant promised to be a compelling mix of shooting, looting, and randomized worlds. It’s a mosaic pastiche of ideas, that if pulled off correctly could spell an entirely new genre. Ultimately, it does what it does well enough to set itself apart as unique and far from a simple imitation. But, it doesn’t reach the level of game-changer.

Before I get into my criticisms, I want to clear up some misconceptions about Remnant: From the Ashes. The game markets itself with so many keywords that it’s hard to know what to expect. At its core, Remnant is a linear shooter with optional side-quests. There are four worlds for you to travel through, each with its own assortment of enemies, bosses, and environments. Despite being billed as randomized, you’ll always go through the worlds in the same order. Playing through the first time, it’ll seem like a rather standard shooter with above average combat mechanics.

Once you finish Remnant: From the Ashes‘s campaign, you’ll notice there isn’t the typical New Game+ prompt. Instead of just pressing a button and starting the adventure all over again, you are prompted to “reroll” your world and select a difficulty (Normal, Hard, Nightmare). Once the world is rerolled, much will be unchanged. Vendors will always be in the same spot, your major objectives are always the same, and key flavor moments are always in a specific order. However, the way everything else is arranged has changed. Level layouts switch around, enemy spawns change, minibosses switch, and even the main level boss could swap. There are over twenty possible bosses and two main bosses in each world, and a single run will only yield about half of these. On top of that, minibosses have eight different permutations. Overall, the possibilities are vast. It isn’t quite endless fun (I don’t think you need to see all eight versions of Gorefirst to die happy), but makes for an extensive experience that offers enough variety between playthroughs to keep things fresh.

This variety shows itself the most during multiplayer, where you can quickly drop in and sample another player’s flavor of the apocalypse. While I personally don’t care if your version of the monster-subway is the one with extra train cars or the one with a sewer section, the unpredictability of the combat does give it an advantage over other cooperative shooters. Moreover, this is your best option to try and kill bosses you haven’t seen yet to farm special gear. Most gear in Remnant: From the Ashes is tied to a boss or special event, with a scant few drops being randomized at some point in the world. So if your particular world didn’t spawn the miniboss you need to summon bees, just go ahead and drop into someone else’s world and keep trying until you get the bee-boss. Anyone familiar with farming dungeons in an MMO should be used to this concept, and the level of masochistic joy it entails.

Speaking of MMOs, Remnant: From the Ashes gives you a degree of character customization that should make any nerd giddy. Over the course of the game you’ll acquire various traits, which can be leveled up to specialize in different styles of combat. You can focus on critical hits, melee damage, stamina regeneration, etc. On top of that, each armor set has different bonuses that will further specialize your character. Scrapper set will give you bonus damage when next to the enemy, while the Radiant set will give you a stacking critical bonus that can get truly ludicrous if built around. Powerful rings and amulets also increase your niche potential, with options such as increasing damage on unaware enemies or regenerating extra stamina after taking damage. To top it all off, powerful weapon mods allow you to charge special attacks such as flamethrowers, turrets, bees, or defensive trees. There are enough options available to not only specialize, but also adapt as the situation sees fit. Your traits are likely going to lead you to a certain archetype, but harder bosses will require you to think laterally and swap builds as the situation demands.

So far, Remnant: From the Ashes sounds great. Challenging bosses, an ever-changing world, deep character customization, all things we nerds demand from our games. So why is it that I find that Remnant falls short of true greatness? Well, there are a number of significant design flaws that I find really prevent the game from reaching its full potential. With all there is good here, it makes the obvious missteps that much more baffling.

First and foremost, Remnant: From the Ashes is stupid hard if you don’t play it with other players. While multiplayer is technically optional, it’s very clear that certain bosses were not designed to be fought solo. I got through the game well enough on the normal difficulty, but as soon as I bumped it up to hard things got real bullshit real fast. One mini-boss in particular took me an hour to beat because he spawned suicide bomber assholes that would oneshot me. Add in several blind corners in the arena, and it was a recipe for instant-death stupidity. With multiple players I could have set someone to clear the bombers while the other two fight the boss, but my review build didn’t have multiplayer.

Speaking of the exploding asshole enemies, do not try to specialize in melee. It is a trap. I say trap, because Remnant: From the Ashes gives you every reason to believe this is a viable build. The opening tutorial is entirely about how to use melee weapons. One of the three starting classes is a closeup shotgun/melee specialist. There are character traits to improve melee damage. There are item sets that compliment the up-close and personal style. There are special melee weapons with their own special melee modifications. And there are bosses that fly. You do the math.

This potential to hit a brick-wall is somewhat ameliorated by the ability to always just go back and grind materials to upgrade a different weapon/armor set. But at the point where you’re backtracking or replaying parts just to get more scrap to upgrade your alt-set, Remnant: From the Ashes stops being a tense and well-paced shooter. It becomes a grindy MMO. And for all the trappings of character creation and dungeon bosses, Remnant: From the Ashes does not deliver MMO levels of content. There simply aren’t enough bosses, variants, or game modes to support it.

The good parts of Remnant: From the Ashes are good enough to keep me playing. I spent about 25 hours over 3 days to review it. Very rarely in this time did it feel like a chore. This is in itself an accomplishment. I was surprised by the plot, and the actual depth the game has to offer. However, it doesn’t have the content to support its own concept. A game like this needs 100 bosses, 32 different world bosses, 200 weapons, etc. That’s a level of variety worthy of grinding for days. Perhaps one day with multiple expansions, Remnant will be that game. As it is, it’s a fun 20-40 hour experience, not a 200-400 hour one.

Remnant: From the Ashes is clearly a passion project. A mosaic of good ideas, these often clash in unfortunate ways. There’s a lot to love here. Ultimately, there’s no enough content to fully realize its vision.