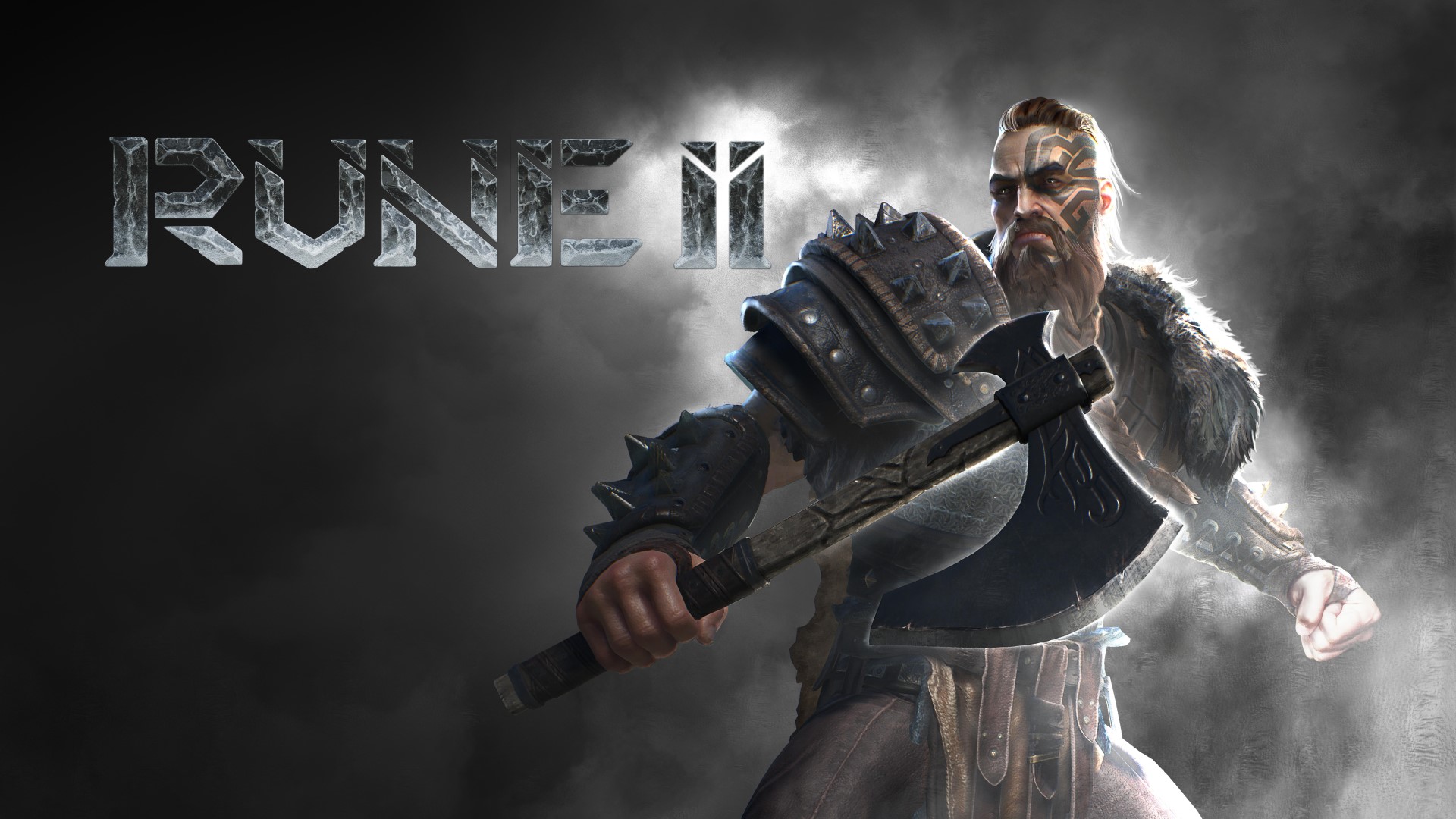 I almost didn’t write this review. I pride myself on not being one of those hyperbolic gaming personalities. I do my best to stay positive, to find the good in every game that I play, and to give the developers the credit they deserve for seeing their vision come to life. Making a game is a ton of work/money. Developers cut corners, content, and features to reach the finish line. I do my best to give studios the benefit of the doubt and to not let one misbehaving ghost or crash to desktop get in the way of me appreciating the rest of the game. But Rune II is far from a finished game.

The premise of Rune II is simple enough. You play as a Viking, risen from his grave after Ragnarok has killed most things. Given a second chance by Heimdall, you’re tasked with killing Loki. This will reverse time and set things to as they were before the apocalypse. Not exactly accurate to actual Norse mythology, but whatever. It’s all just a framing device. The world is fucked, and there are monsters everywhere. Midgard has been fractured into a series of islands divided by a great roiling sea. So you sail from island to island, beating down monsters on a hunt for magical artifacts to beat Loki.

This quest to hunt for artifacts and fight Loki is Rune II’s core gameplay loop. You actually face Loki for your first time about an hour into the game, and quickly find that even defeating him doesn’t actually kill him. He kicks you back out into Midgard, where you have to hunt for even more artifacts to fight him again. You’re given the rough locations of the artifacts, a 90 minute time limit, and off you go. You’ll do this over and over again until you’re strong enough to kill Loki.

This loop is a pretty novel way to gate difficulty in an RPG, so Rune II gets credit for that. Most open-world games struggle with proper difficulty scaling. The most common method is creating zones of various power levels, à la World of Warcraft. In Rune II, there’s no super hard island of dragons you have to be level 40 to reach. As the game goes on and you get stronger, the natural progression of cycles will spawn correspondingly tougher enemies. Aside from this main quest, there are various “Paths” that serve as side objectives. Kill X number of dwarves, craft X bows, etc. These Paths generally lead to some reward that will help you craft a god slaying weapon. Wielding one of those will allow you to finally kill Loki and end the game.

To Rune II’s credit, the game does a lot to focus on the fantasy Viking elements. Combat is loose, but in a fun way. You’ll swing your mighty axe, and limbs will be launched to and fro. If you need to heal, take a bite of a lizard and your health will spring back up. There’s a lot of lovable goofiness to it, like the ability to sever arms and then use them as weapons.

Though technically a survival/crafting game, the actual survival/crafting has been stripped down and streamlined. If you need wood or minerals, just punch trees and rocks. If you want to build a house, you find one of the places where a house has been burned down and spam the use button. There are no crafting times, so as long as you have an anvil and the materials your new broadsword is just a click away.

If all of this sounds fun, I need to make something clear. All of my positivity is theoretical. Very little of the game actually works as intended. Everything is a buggy, broken, unfinished mess. Where do I even start? The faster crafting could be good if it didn’t feel so vestigial. The fluid combat could be guaranteed laughs if enemies had any kind of complexity. The core gameplay loop could be compelling if it wasn’t so repetitive. The focus on looting and recycling weapons could be good if the inventory wasn’t constantly fucking up.

You can often point to certain pieces of a game and see how they’re dragging down the whole package, but with Rune II it’s more dead weight than actual game. The problems are so fundamental and ubiquitous that it’s difficult to even recommend individual changes. I’ll start with a basic one. Rune II does its best to simplify the grind by auto-equipping better armor pieces when you pick them up. It judges this solely on the basis of the armor stat. If you pick up a 2 armor hat, it will replace your 1 armor hat. This is absolutely infuriating, since certain pieces of gear trade armor for increased damage. So if you’re wearing a set of Rage armor to up your damage at the cost of durability, get ready to open your inventory almost every time you loot an enemy.

This is just one way the fundamentals are completely fucked. There are a ton of items in the game you can craft, but you can’t sort your crafting menu. You can select armor/weapons/consumables, but every single recipe of that group will be listed in the order you unlocked them. If you randomly unlock a special cloth bracer variant, it’s at the very bottom of the list. There’s no consistent way to guarantee that what’s at the bottom is actually strongest, so you just have to manually compare. Which would be okay, if you could actually sort by all armor of the same type. Which you can’t.

If you take the time to dig through the crafting menu, you’ll find there to be little functional difference between item tiers. From copper to steel, everything is basically the same. When you get to obsidian, there’s a massive power spike. Unless you’re making the obsidian bow, which is actually 10 damage weaker than the lower level Viking bow. But worry not, chances are the numbers don’t even mean anything. My legendary sword, listed as power 205, only did 20 more damage per swing than my starting hammer, listed as power 52.

These aren’t bugs. These are fundamental design errors. It might be a bug that it takes me 6 poison ore to make 3 poison arrows. What isn’t a bug is that the ore only drops off of a very specific enemy. Or how that enemy becomes less common as the game goes on. Or that I need 75 of those arrows to complete my arrow making quest. That is the difference between a buggy game and a fundamentally broken one.

I haven’t even gotten to the actual gameplay flaws. The entire game world feels unfinished, and it clearly can’t sustain the combat and spawning mechanics. You’ll find plenty of enemies in large caves or open fields. As soon as you get to some of the tighter corridors or more intricate buildings, things are conspicuously safe. On the rare occasion that enemies do spawn in these areas, they will frequently do so inside of a ceiling and unable to get to you. To keep things fresh, enemies will frequently spawn directly out of your ass, so much so that they pretend like it’s an intentional trick by Loki (not joking).

The game is even broken in the big picture design. Time limits are fundamentally bad for crafting games. I need time to open up my inventory, analyze what build would be best, and then go about collecting what I need to make my ultimate warrior armor. Having a constant ticking clock destroys any kind of satisfaction I can take out of sitting in my cabin and utilizing all the materials the game told me to collect. Every time you slow down, it feels like you’re being penalized.

I could keep going, but at this point, you should get the picture. Rune II isn’t a finished game. It isn’t even a beta. This feels like an E3 build never meant to reach consumers. I don’t doubt the game can be fixed with a ton of work. The premise is fun enough that I’d like to see it done justice. But that’s unlikely.

The day after Rune II launched, the developer Human Head Studio shut its doors forever. This came as a surprise to the game’s publisher, Ragnarok Game, LLC. As of now, Ragnarok Game is trying to pull together a team to fix Rune II and deliver on promised future content. Human Head has moved on, absorbed by Bethesda to create a new team working on something unannounced. For the few employees at Ragnarok Game, this truly feels like the end times. I cannot fathom how truly, royally fucked they feel. My heart genuinely goes out to those brave souls still manning the forums and trying to make the best of this terrible situation. Which brings me to why I didn’t want to write this review.

The people that actually made Rune II are done. They have wiped their hands of it and have moved on to more Bethesda-esque productions. This review won’t affect them. Rune II bombing won’t limit their ability to make a new game or tarnish their studio’s reputation. They knew it wouldn’t do well, and they accepted that. But the people at Ragnarok Game, they will be hurt by all the negative press. They have a huge job ahead of them, made even more daunting by a critical reception that is, most generously, “below average.” It’s not their fault the game got kicked out of the gate before it was done. Yet here they are, picking up the shattered pieces. There’s no Loki for them to kill to rewind the clock. They just have to forge ahead.

So to the people at Ragnarok Game, if you are reading this, I am truly sorry for your predicament. I’ve been on the forums, read your posts, and my heart goes out to you. You good people are the reason I hesitated to write this review. Please don’t consider this review wanton negativity against Rune II. I hope my honesty can help you build a much better Ragnarok. I eagerly await what is to come.

The promise of Rune II is visible without squinting too hard. It just hurts to look at.