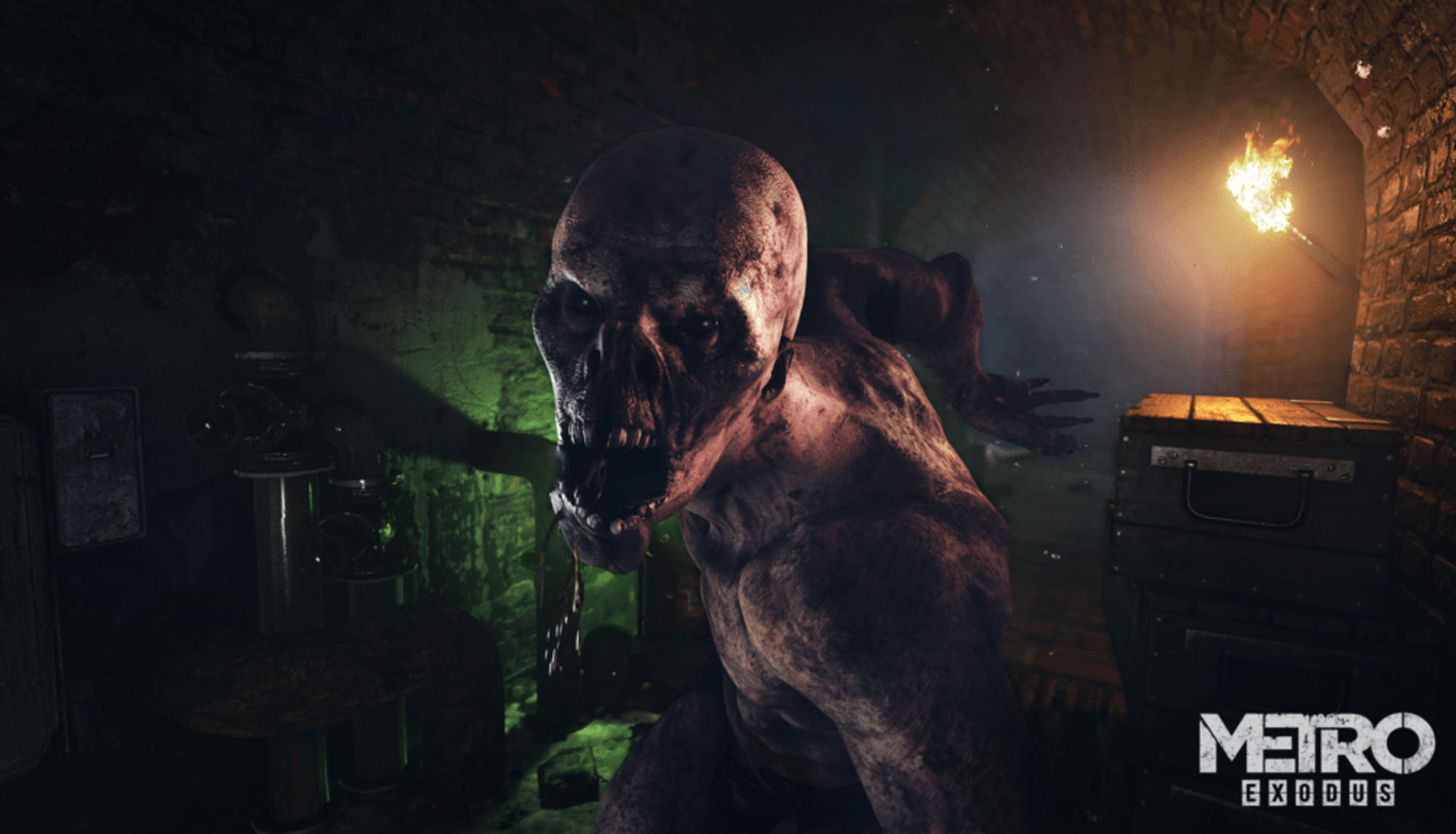 Developed by 4A Games

It’s a novel thought, having a scary game that actually focuses on the scares. Luckily, the source material lends itself beautifully to this noble goal. Set in the dark and monster infested tunnels of the Moscow underground railway, every inch of Metro is just dripping with atmosphere. The world is inhospitable and uncaring. Humanity is on the cusp of breathing its final breaths, and the last flicker of hope could be snuffed out by even the slightest wind of change. Contending with monsters, strange anomalies, actual ghosts, and even air that wants to kill you, it turns out that the greatest threat to mankind’s survival is still ourselves. That and the flying demons.

However, despite all the praise that Metro 2033 and Metro: Last Light earn in their visual storytelling and unique atmosphere, the gameplay never matched up. It’s super badass that the game gives me a hardcore mode that takes away my HUD and forces me to count my shots, but when every engagement just boils down to picking off enemies in dark corners and keeping my air rifle pumped, it gets repetitive. This is coming from a guy who holds Metro pretty damn close to the top of his horror franchises list, so know it’s with love that I say the actual shooter bits were subpar at best.

So when I first saw that Metro: Exodus was focusing on expanding the gameplay and game world in one fell swoop, I was equal measures excited and skeptical. Surely, the game needed to evolve past blowing out candles and tossing knives. At the same time, would the new tone and setting destroy the fundamental atmosphere that fans flocked to? Just like man’s ability to both appreciate the beauty of a poppy flower and then process it all into heroin, the duality of Metro: Exodus proves that things are never as easy as a simple black or white.

Metro: Exodus starts sometime after the events of Metro: Last Light. Having saved the underground from the Nazis and Communists, Artyom now passes his time by searching for signs of life beyond Moscow. The rest of the Rangers are skeptical, but Artyom is soon proven right when a giant armored train roars by and they find two strangers who stumbled in from a nearby village. We quickly realize that there is not only life beyond the metro, but that the powers that be are intentionally keeping this a secret. Their reasoning? The war never ended, and this is the only way to keep Moscow safe from NATO forces.

“Hold on, you’re saying that even with nuclear fire scorching the face of the earth and mutant crabs polluting the oceans, that NATO is somehow still a thing and it’s trying to conquer Russia? That sounds kind of stupid.” Why yes, it DOES sound stupid! While I don’t want to spoil anything, it’s quickly pretty obvious that this isn’t going to be Artyom and the Rangers vs. the USA. In fact, the plot is probably the weakest part of Metro: Exodus. Early in the story, Artyom and the rangers hijack the Aurora, an armored train which serves as their conduit to the rest of the country. From here on out, the Aurora serves as the literal and narrative vehicle from which to transport the cast from set piece to set piece.

Metro: Exodus goes as such: Artyom and crew will arrive in a new place, only to be confounded by the local bad guy. Artyom will then be tasked with getting whatever they need to continue on their way, which generally also requires dealing with said local bad guy. Having dealt with the bad guy through either violence or diplomacy, the crew will be off to the next spot and do it all over again. This happens about five times, and then the credits roll. There’s no real overarching plot. The carrot leading the pony along isn’t alien invaders or the impending doom of mankind, but that you just need to keep on truckin before everyone gets bored.

So the story is weak, but how are the set pieces it drags you through? This is where Metro: Exodus truly shines. While the overarching plot is uninteresting, the self contained stories of each location are fascinating. Each of the game’s five zones give a distinct glimpse into how life evolved beyond Moscow. What’s more, each zone comes with its own challenges, gameplay style, and even moral grey area. When confronted by religious fanatics, it’s clear that these are normal people just frightened by the presence of a new armed faction. Stealth is probably the best option, so as not to hurt any well intentioned civilians. In the very next zone, you’ll be mowing down hordes of evil mutant cannibals. In most locations you’ll have the choice of whether to rush in or go all sneaky beaky like, so the different portrait each zone paints is integral in deciding whether or not to get your murder on.

Now admittedly, it’s a tonal shift to go from sneaking through bushes to shotgunning mutants, but it keeps things fresh. I’ve never been a huge fan of the, “get the bad ending for shooting the humans,” style of moral choices. Having the option to shotgun bandits in the face while jumping sand dunes in my sick van is a step in the right direction. The fundamentals of the gameplay are largely unchanged from previous games, but the latitude you have in choosing how to go about your engagements is what makes Exodus a cut above its predecessors.

There are a slew of other gameplay changes, but it’s less clear as to whether they are positives or negatives. A clear plus is the ability to modify your own weapons on the fly. This was always a thing in Metro, but now you have more fluidity in changing out your attachments. On the flip side, bullets are no longer a currency, opting instead for generic crafting of consumables and hunting for hidden upgrades. You’ll mark off areas on your map Ubisoft sandbox style, then scavenge through them for rare weapon parts and upgrades to your helmet/armor/flashlight/etc. There’s an infuriating inconsistency to the landmarks, with some hiding entire extra quests with a unique reward, and others just being piles of mutant spiders. You’re never guaranteed a reward, so be prepared before you make the trek.

Not knowing what the little question marks on my map hide wouldn’t be such a burden if there were an easier way to switch out weapons. There are a number of safe houses dotted around the map where you can switch out your suit upgrades, but the only place you can change your arsenal is on the actual Aurora. This would be fine if the Aurora served as some kind of home base, but beyond this basic function there’s no real reason to go back. Sometimes you’re treated to bits of story, but it isn’t paired with a substantial gameplay reward. As a result, returning to your base to learn about your crew directly takes away from you actually playing the game.

Splitting story and gameplay is an incredibly antiquated way to go about your narrative, and isn’t the only remnant of the past that Metro: Exodus holds onto. The whole silent protagonist thing hasn’t been done in ages, and I didn’t realize just how jarring it is for dialogue to just happen at you. Objective markers are also deliberately vague with no journal to look over, so key bits of mission critical information can be completely missed if you choose to blow your nose at an inopportune time.

Now all the criticism I’m leveling doesn’t change the fact that the unique Metro flavor is why you’re here. From constantly cleaning your pipe rifle to wiping off your gas mask, the style of the series is as strong as ever in Metro: Exodus. While some might bemoan the leaving of the underground as undermining the integrity of the series, it’s nice to see what else this world has in store for us. From the Mad Max dunes to the dead city, the sheer variety in Exodus easily makes up for most of the shortcomings.

For fans of the series, there are still plenty of bushes to hide in and definitely enough monsters to launch pressurized metal pellets into. The core feel of Metro is still here, and the expanded gameplay options and world is a treat for fans. Newcomers need not be scared off, as the plot of the previous two goes largely unmentioned. However, the game doesn’t evolve nearly enough to put it on par with similar titles. The lack of an expanding base and your somewhat limited arsenal makes Metro: Exodus little more than just another shooter. I appreciate that I can tackle my objectives in any order, but Mega Man already did that 30 years ago.

By the time the credits roll, it feels like the people at 4A Games are setting up for something grander. A greater adventure in a larger world, with real consequences to your actions. Something that Metro: Exodus very easily could have been. You see glimpses here and there in the various moral junctures, but the lack of concrete gameplay consequences takes a lot of wind out of the the game’s sails. Still, Metro: Exodus is a uniquely poignant and terrifying experience that should be experienced by all horror shooter fans. I just wish it lived up to its own promise.