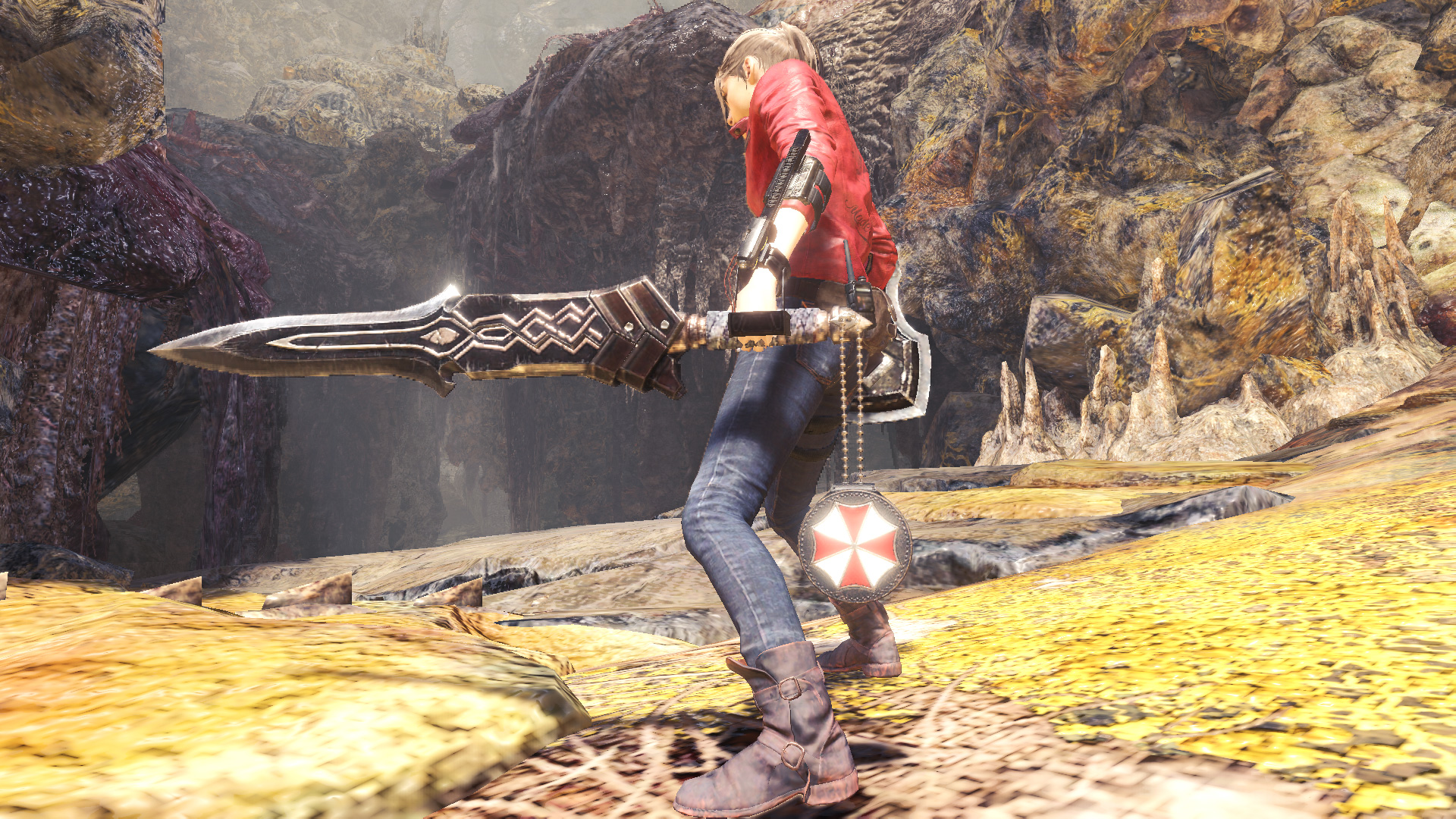 Well now, If Monster Hunter World isn’t the game that just keeps on giving. Not only was the base game a 200+ hour transcendental gaming experience, but the people at Capcom just keep piling on the content. There’s constant Free-LC, new monsters, and they just dropped the massive new Iceborne expansion. I never thought when I first picked the game up to play with some friends, that we’d all still have a weekly hunting party with ever new content to dive into. Seriously, if you haven’t gotten on the Monster Hunter bandwagon, you need to. If you’re worried about it being too hard or too grindy, don’t. Just accept the grind as a way of life, and cuddle with your Palico for comfort.

Today, the good people at Capcom are flexing their cross-promotional corporate synergy muscles with some good ol’ free content. Fans of the recently released Resident Evil 2 will want to check it out. From the Official Press Release:

Monster Hunter World:Iceborne continues the series tradition of providing robust post-launch support for players. The end of 2019 is no exception, as the hunt intensifies with new collaborations and more free content coming soon. From 4pm PT on November 7, Iceborne console players will get access to event quests for the Raccoon City collaboration as well as the new equipment from the weapon design and Palico gear contest. PlayStation®4 players can look forward to exclusive free content starting November 21, as the first round of event quests get underway for the Horizon Zero Dawn™: The Frozen Wilds collaboration. This will be followed in December with a console update featuring a new monster, seasonal in-game events, and additional Horizon Zero Dawn™ content for PS4™.

Raccoon City collaboration:
Popular survival horror icons Leon, Claire and Tyrant pay a visit to Iceborne for the Raccoon City collaboration, which will be available from 4pm PT on November 7 in Monster Hunter World: Iceborne. As part of this special collaboration, hunters can acquire materials upon completing the event quest (MR20 or above) to craft Leon α+ and Claire α+ layered armor sets plus three Raccoon City themed pendants to spruce up their favorite weapons. Additional rewards for completing the event quest include two new gestures, allowing hunters to shuffle like zombies or even zombie bite a nearby monster to deal damage. Raccoon City also takes over Your Room, with a variety of themed decorations available for hunters to deck out their pads in survival horror style, including the iconic typewriter and item box (which of course includes the ability to save game progress and store your items respectively). Thanks to last month’s title update, players can also show off their macabre abodes as friends can visit each other’s rooms.

The Raccoon City collaboration would not be complete without the iconic Tyrant. “The Handler’s Terrifying Tyrant” paid DLC costume transforms the normally spunky young woman into a trenchcoat-wearing, quest journal-wielding brute to join hunters on quests, prepare meals at camp, and even appear in cut-scenes.

So Resident Evil themed events, gear, and even a Tyrant quest giver? Sign me up. Keep in mind that these events are available for a limited time, so you’ll want to check it out ASAP. In other big news for PS4 players, the game will also be doing a collaboration with Horizon Zero Dawn: The Frozen Wilds on November 21st. More info on that:

But wait, there’s more! In addition to these crossover events, December will mark the return of seasonal fests for Monster Hunter World. These Timed events will revamp the hub area, and are launching in conjunction with the release of a new unrevealed monster. PS4 players can expect even more content, as their seasonal fest will be tied into even more Horizon Zero Dawn: The Frozen Wilds themed content. Even more from the Official Press Release:

December 2019 Updates:
December will keep the free content updates rolling, kicking off with a soon-to-be revealed new monster being added to the already massive roster in Iceborne. The month will also mark the return of Monster Hunter’s seasonal fests that will offer themed take-overs of the hub area, the return of nearly all previously released event quests, limited bounties for special items and more. This time around though, and for the first time since the expansion’s launch, the fests will be held in both the Astera and Seliana Gathering Hubs.

For PlayStation®4 players, additional rounds of the exclusive Horizon Zero Dawn: The Frozen Wilds collaboration will become available in December, with even more free content featuring new event quests and themed gear for players to craft. Hunters will be able to build a full armor set fashioned after the Shield-Weaver armor in Horizon Zero Dawn and embark on new event quests to upgrade the Stormslinger weapon from the first round of quests in November. Additionally as part of the December content, hunters will be able to craft the new Banuk armor set and there will also be quests to upgrade Aloy’s Bow and the Felyne Watcher equipment that were available in Monster Hunter: World. More updates are planned for 2020 with information to be shared later.

So what are you waiting for? Check out the game that has robbed hundreds of hours from me and my closest friends! It’s not like you were learning a new language or anything that requires a similar time commitment.