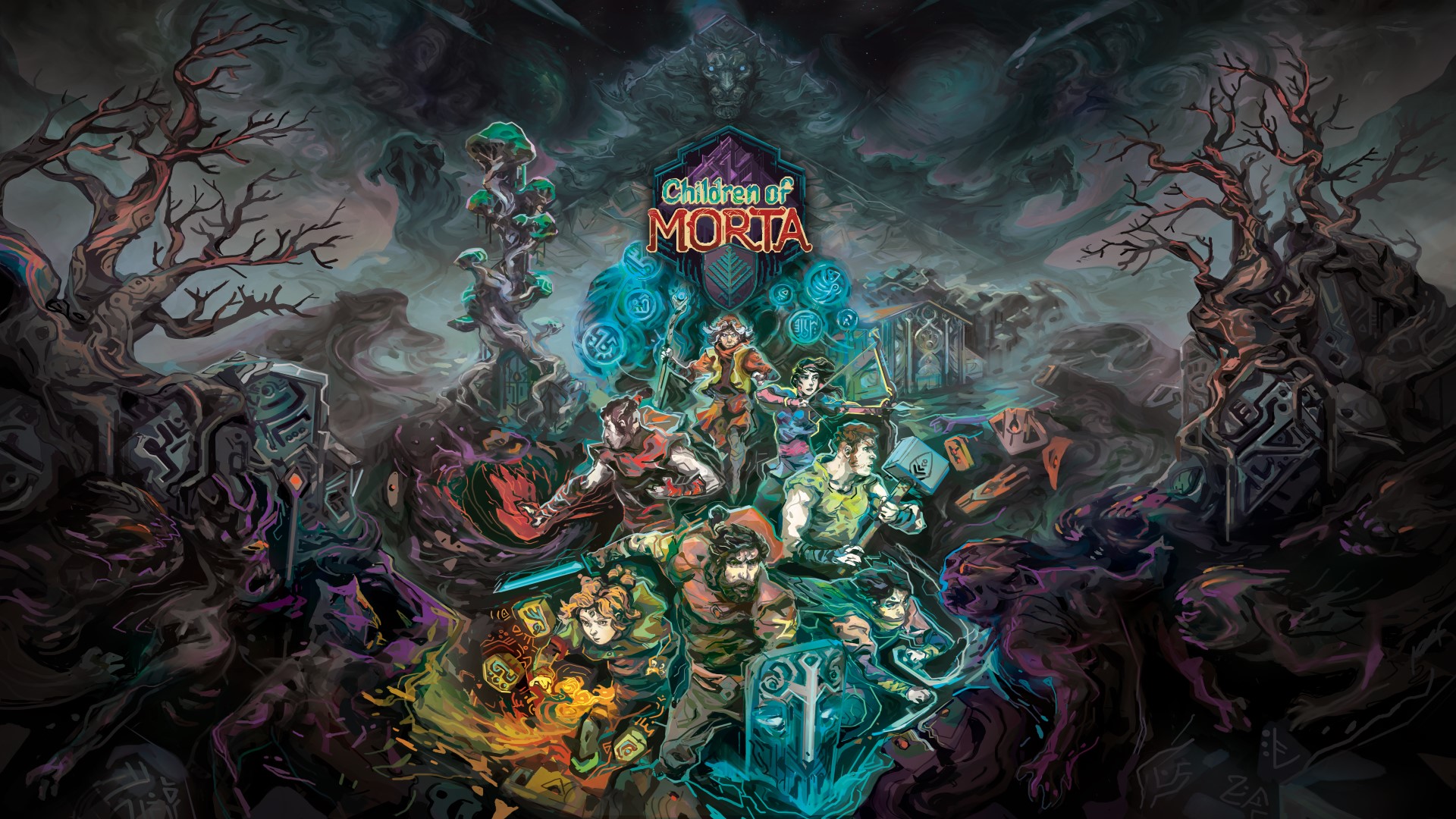 Children of Morta Review – Use’ ta be the fambly was fust

Available on PS4, PC, Switch, Xbox One, Mac, and Linux

I find that roguelike games are frequently lacking in narratives. Either there is no lore at all or so little that you have to reverse engineer what is going on through tiny fragments of details found in item descriptions. Not that this style of storytelling is necessarily bad, but it leaves a bit to be desired. Storytelling is arguably the most important linguistic tool in existence. It’s almost telepathy. No other method of language is able to make another person experience an emotion so vicariously. This is what first got me interested in Children of Morta. In regards to what I like the most in a game, the story is second only to gameplay. A roguelike experience with an in-depth story is a strong combination, and Children of Morta, for the most part, does not disappoint.

Children of Morta revolves around the Bergson family and their collective quest to defeat a mysterious force plaguing their home. The guardian deity of Mount Morta, Rea Dana, has somehow become corrupted. The Bergson family must take up arms to defend their ancestral home, and restore Rea Dana. If that story sounds a little boring and played out already, that’s because it is. The overarching narrative is similar to countless others. But what sets Children of Morta apart from the rest is that this isn’t the main focus of the game, far from it. To my surprise, an apocalyptic curse that is killing God is just the setting for a story about family.

The true strength of storytelling for Children of Morta comes from the dozens of micro-narratives that occur in and around the family members. Each of the nine family members (and several pets) are shown on an intimate level that is almost never reached by similar media. The individual family members must not only grapple with the reality of the mountain’s curse, but also find their role in the family dynamic, especially in regards to lifting said corruption. It is a roller coaster of emotions. With each unsuccessful attempt at conquering the mountain, you are rewarded with a small segment of the Bergsons interacting with one another. From round-table discussions of the impending doom to the bittersweet joy of a mother seeing her child first take up arms in the ancestral struggle, Children of Morta shows heartwarming and heartbreaking moments of humanity.

The presentation of Morta’s story is just as incredible. The characters themselves have no voice actors. Instead, Children of Morta has a Darkest Dungeon style narrator who describes what is going on. This style of storytelling is great because it goes right past clunky expositional dialogue, and instead cuts right to the heart of what is happening. There are texts and descriptions of the lore, but the narration is a perfect and simple way to convey everything that needs to be known.

In addition to the top notch sound design, Children of Morta looks fantastic. The intriguing and complex visual style of Morta is one of my favorite parts of the game. The art takes a setting that would otherwise be super basic and gives it a dreamlike quality. Complex hieroglyphs dot the ruins around the forests and caves. Intricate stained glass windows and medieval tapestry style murals are found at the Bergson’s home. Everything from the floating mountains in the background to the geometric patterns found in a tree’s roots gives Mount Morta an even greater feeling of high fantasy, almost as if this takes place in an alien world. Perhaps it does.

Unfortunately, as incredible as Children of Morta’s storytelling may be, the game itself does not hold up quite as much. Certainly not terrible, just not very interesting. Although each family member has their own distinct class, each with their own skills and gameplay, it’s all very similar. Playable characters have one basic attack combo, a couple special attacks, and a dodge. The special attacks have too long a cooldown to be useful. I can see the thought process of each character’s moves, and indeed in theory they would be pretty cool. A wizard child with tank controls and a firebolt minigun spell is dope. But in practice, it comes out a bit clunky.

As a roguelike, Morta revolves around individual (or co-op, if you’re one of those weirdos who has friends) family members descending into the labyrinthine dungeons in and around the mountain.There are six characters in all, four requiring a bit of work to unlock. Each character represents a different class, with their own skills and combat style. Some basic, some complex. The goal is not to finish the game in one go; in fact, you are forced to return home after a boss fight. Your overarching objective for most of the attempts is to simply go fight some goblins, get some gold and experience, and then ‘die’ and be teleported home.

This felt like a real grind for me. Leveling up a character enough to become viable was an arduous process, requiring several runs just to unlock the basic skills. What I did find cool was that as you level up, you also unlock skills that apply to all family members. This is just one of the ways Children of Morta encourages you to play as other classes. What I did not find cool was that after proceeding to the second area, your characters become corrupted themselves, causing debuffs that increase the more you play as that character. Morta forces you to play another class while the corrupted one rests and heals. Perhaps it’s because I’m a really shitty player, but because I was switching classes so frequently, I never really felt like I was improving enough. Getting into the flow of the dual-blades class would evaporate quickly when made to play the big-hammer man. While I’ve never seen this in another game, this mechanic strikes me as a cardinal sin for a roguelike game. This isn’t game breaking by any means, but I found it to be a little annoying.

On top of that, the movement felt restricted. There is no move canceling and significant dodge restrictions for most characters. If you find yourself in a group of enemies, it’s almost impossible to not take damage. As a tanky character, the gameplay often felt like a balancing act between finding potions on the ground and actually fighting. For the rest, it was a lot of kiting and running away. I get the feeling that this could benefit from everyone having less health. I would much prefer Nuclear Throne style quickness to this game. I’m a busy man.

At first, I was disappointed in the relics you find around the dungeons. Binding of Isaac, unfortunately, set a high bar for me in regards to the artifacts you collect to buff your character for each run. Whereas in Isaac the items you collect synergize into endless possibilities of unique attacks, in Children of Morta, more often than not, the artifacts you find are just a stat buff or a simple alteration. But as you progress past the first area, two new mechanics come out. Eventually, enemies start dropping runes. Runes are where the gameplay really shines. Each rune offers an alteration to your attacks. Enemies catch on fire when hit, chance to throw a little blade with each swing, stuff like that. But around this time your characters reach level 8-12, and with it, they get their own personal runes thrown into the mix. Meaning that if you find the right one, and the conditions of the rune are met, you will get another family member to appear out of thin air and perform a quick power attack. This by far the coolest part of Children of Morta’s gameplay. Tagging in a friend for a quick move was a lot of fun and I wish they went into it sooner. Suddenly the gameplay doesn’t seem so tedious when dungeon crawling becomes WWE.

As far as gameplay goes, you could do a lot worse. But what sets Children of Morta apart from the rest of the indie roguelike genre is its phenomenal storytelling. Most playable characters in roguelikes are cardboard cutouts of a played out trope, existing only to give your attacks context. No background, no character arcs, no depth. Each person in Children of Morta has their own Hero’s Journey, and the culmination of the art and narrative and sound makes up for the gameplay by a tremendous margin.

Fantastic storytelling makes up for average gameplay, but doesn’t launch it into the stratosphere.