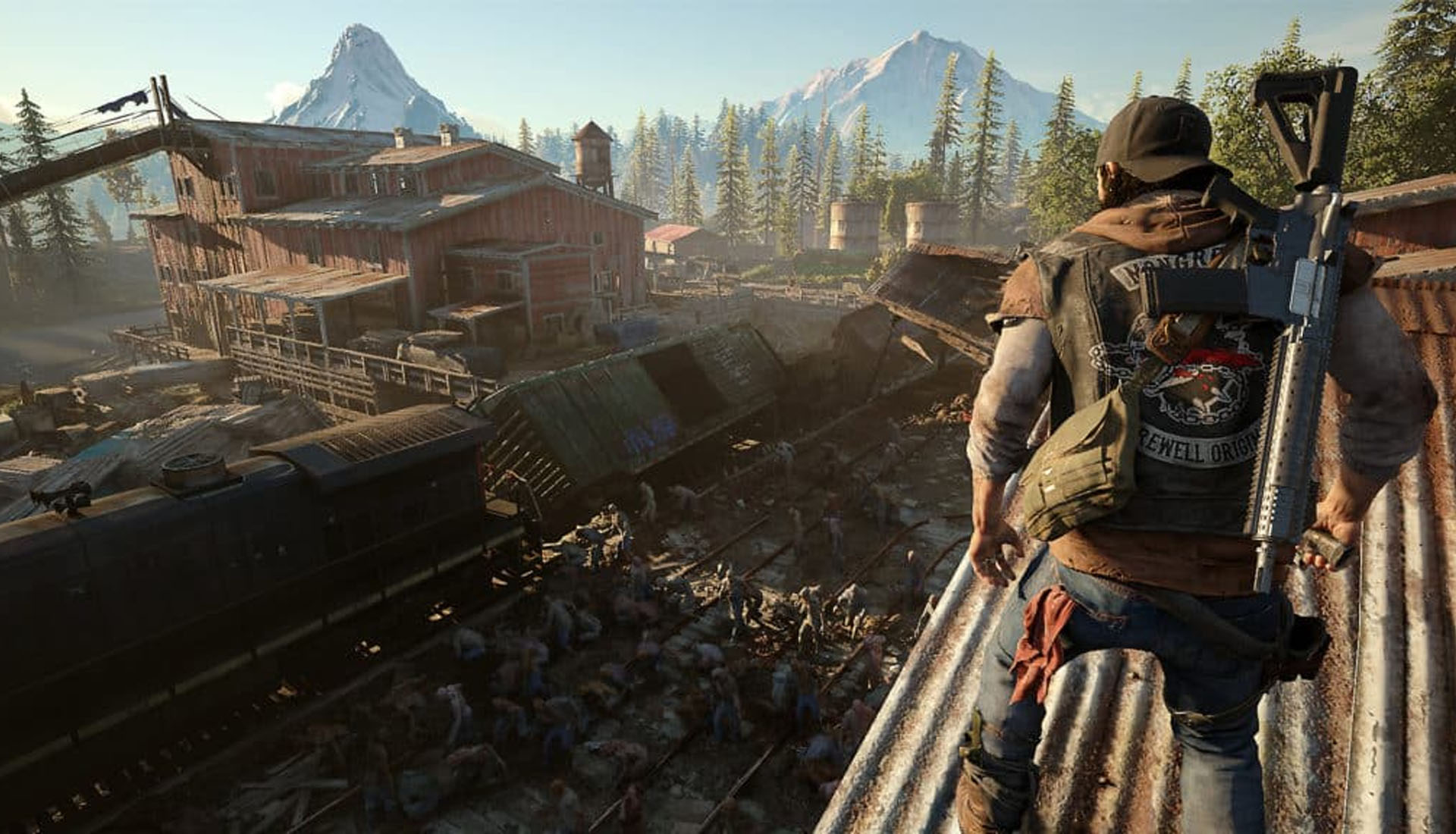 Available only on PS4

Is it just me, or is there something a bit quaint about open-world zombie survival games? They were all the rage for indie devs trying to make it big, like, eight years ago. DayZ, 7 Days to Die, State of Decay, Project Zomboid, etc… Even mainstream titles like Call of Duty and Red Dead Redemption got in on the zombie action. There’s a spartan logic to this, as zombies are basically a way to justify not having to program AI. Cynicism aside, there’s no denying that the perfect zombie survival game is the distant shimmering fantasy of many gamers. Most of us have a zombie survival plan, and being able to see that brought to life in gaming form would be like Walter White inventing Super Meth.

Before you get your hopes up, Days Gone is not that game. Many thought it might be. When first announced at E3 2016, the reveal trailer showed a promising dual between a biker and a massive swarm of zombies. It was the kind of badass generally reserved to describe men who have won real-world fights with bears. The way the zombies poured over each other in a seemingly endless consuming tide with no signs of stopping is the stuff of genuine nightmares. The subsequent 2017 trailer showcased the main character infiltrating a camp, luring in a nearby zombie horde, then blowing up a wall to allow the beasts to do the heavy lifting. Totally awesome. Unfortunately, this is largely absent from the final game.

No, it turns out that Days Gone is not the game we thought it would be. Absent is much of the living world and unique interactions showcased in the E3 trailers. It’s there in bits and pieces, but certainly not to the scale we were led to believe. This seems to be where much of the criticism is coming from. The game is getting skewered by many critics, and I can see why. If you go in expecting a deep survival crafting game in a living open world, you will be sorely disappointed. You’ll be much happier if you go in with a blank slate. For all the things that Days Gone doesn’t do, it does what it does very effectively.

I’m going to frontload my criticism, as much of what brings Days Gone down comes in the first 10 hours. No, that’s not a typo. The first whopping 10 hours of the game are a confusing mess. Launching off with a far too brief and disjointed flashback, we’re quickly introduced to main character Deacon St. John, his best buddy Boozer, and his soon-to-be-dead plot device/wife Sarah. It’s the eve of the apocalypse, and a strange infection is turning people into… wait for it… “Freakers.” Yup, the game calls zombies “Freakers”, and they are sticking with it. The quick cut editing and rushed pacing of this section are so bad that I got Suicide Squad vibes. It felt like Days Gone was trying very hard to pull the emotional punches of The Last of Us, but in the first 30 seconds. The game then jumps two years into the future, where Boozer and Deacon are mid-pursuit of a guy that stole some stuff.

After the first few tutorial missions, Days Gone starts in earnest. The world opens up, with two camps that serve as merchants and mission hubs. In the East is Copeland’s camp, a gun-nut hyper-patriot survival prepper who loves God and Country. In the West is Tucker’s camp, which essentially uses slave labor to try and eke out a subsistence living. It’s pretty clear there are no “good” guys here. Extreme ideologies prevail in a world where survival is anything but guaranteed. Plot-wise, Boozer has his arm messed up by a blowtorch from some bad guys and needs to heal. Meanwhile, Deacon observes a mysterious mission from the presumed destroyed NERO organization and is given a glimmer of hope that his wife might be alive.

Let me be clear, this is the part where Days Gone kind of sucks. Way too many characters are introduced without a whole lot of payoff. We’re asked to immediately care about the fate of a best friend we know nothing about. None of the bad guys are properly established, and the busy work quests have very little meaningful payoff beyond some better guns and motorcycle upgrades. I found myself getting sick of playing and actually dreading that the map would open up into more pointless busywork.

When Days Gone finally opens up for the first time into the southern regions, the quality quickly and steadily increases. You’re introduced to Iron Mike and his camp at Lost Lakes, and everything starts making sense. Optional objectives, meaningful rewards, real challenges, and a gripping story all come into full form. Most importantly, you’ll come to understand Deacon. Deacon’s detached pragmatism is equal measures realistic survival necessity and emotional insulation. He does what must be done, but uses this logic to inoculate himself against the real ramifications of his actions. He’s constantly confronted with other survivors with alternative and sometimes contradictory mindsets. As things progress and become increasingly extreme, you’ll be left wondering if Deacon really made the right calls.

This will also be the first time most players encounter Days Gone‘s main selling point: Hordes. While available earlier on, you won’t have easy access to enough equipment to take on these swarms of 100+ infected. You can choose to fight Hordes during the day, where they will be hibernating in caves. At night, Hordes roam around looking for food and water. Freakers, in general, are significantly tougher at night, so you’ll likely want to hunt down the nesting sites and mark them for daytime eradication. Regardless of where you choose to engage, these massive encounters were always barrels of fun. Early on, setting up enough traps and managing your explosives is both tense and challenging. You’ll always want a clear escape route, as getting caught for even a moment can quickly lead to death. Most importantly, watching the swarm pour over each other in the mindless pursuit of your throat is thrilling no matter how many grenades you manage to pack into your pockets.

Hordes are far from random encounters and are actually one of Days Gone‘s many collectibles. An open-world staple, collectibles are the shiny carrots that keep you dragging the plow of endless grind. Usually, this comes in the form of documents, lookout points, camps, special targets, etc. There’s generally some kind of reward attached, like new guns or vehicles, but the task itself is usually thankless and boring. For example, Far Cry’s radio towers are a tedious jumping puzzle that reward you with the locations of boring fetch quests, pointless hunts, and repetitive enemy camps. Days Gone mixes this up by having the collectibles themselves be the challenge. There are still camps to clear, but these are generally pretty tough. Infestation zones can likewise be pretty dangerous. But the hordes are the clear winners here.

Granted, it isn’t all a pulse-pounding action. Days Gone still has plenty of boring filler collectibles to pointlessly hunt for. These range from the predictable landmarks to predictable character info, to be scooped up and stored away forever in the annals of an impenetrable codex of backstory. It’s par for the course, but so were unskippable cutscenes 15 years ago. It’s time to evolve.

I won’t go into more of what happens in Days Gone after you reach Lost Lake, as it gets very spoilery very fast. What I will say is that there is a ton of game left. You’ll have real days gone – see what I did there? – if you do all the activities. There are six zones, each with their own personality and an easy 60 hours of gameplay between them. By the end, you’ll have seen enough of the world to be genuinely invested in what happens to it. It’s nowhere near as deep and touching as The Last of Us but does an admirable job of investing you in the fates of a myriad of different characters. It’s far more gripping and personal than your typical open world game. It fares poorly compared to Red Dead Redemption, but I liked it a hell of a lot better than Assassin’s Creed 12.

Combat in Days Gone is nothing revolutionary, but it works where it needs to. Too often do open world games fall prey to easily abusable mechanics. Stealth is too forgiving, sniping uncounterable, tigers too plentiful, etc… To its credit, no one tactic in Days Gone is clearly overpowered. Days Gone has a mix of stealth, cover, gunplay, and dodging, which are each useful in different situations. There’s a nice mix of shotguns, machine guns, pistols, and rifles, but nothing revolutionary. Overall, the combat works in service of delivering tense fights against camps of raiders and hordes of Freakers alike.

One other little niggle I’ll address before closing is the biking. Riding over the open road on your boss hog is dope. Unfortunately, there isn’t a lot of open road. There are constant roadblocks forcing you to divert off road through tricky and dangerous narrow paths and obstacles. I have a suspicion that it’s a secret loading screen, but it seriously breaks flow. They also never really explain why everyone uses motorcycles instead of ATVs or trucks. I mean obviously it’s because programming multiple types of vehicles would be really hard, but they could at least try to explain it in the story.

I started this review by stating that Days Gone is not the promised zombie game of legends. You won’t build your ideal base, recruit your team, start a resource farm, and go from simple biker to savior of the world. You won’t craft outside of throwing together some pipe bombs and Molotovs. You won’t harvest resources outside of snagging scrap from cars and random parts to make said pipe bombs and molotovs. You won’t recruit survivors to fill your ever expanding ranks. If you look at Days Gone as what you wish it could be, you’ll be let down. This is closer to Horizon: Zero Dawn, but with zombies. Er, sorry…“Freakers.”

It’s not the ride you expect, but Days Gone is still a hell of a ride. It’s a slow burn, but when it does get where it’s going it delivers. There’s enough variety in characters, missions, and tasks to keep you consistently engaged. Most importantly, there’s sufficient end-game challenge to reward all of the time you put into maxing out your arsenal. I’ve seen some critics openly state they find it boring, but I couldn’t disagree more. Past the first two zones, I never felt like the grind was an actual grind. It isn’t a perfect game, but that’s some of the highest praise an open-world game can earn.