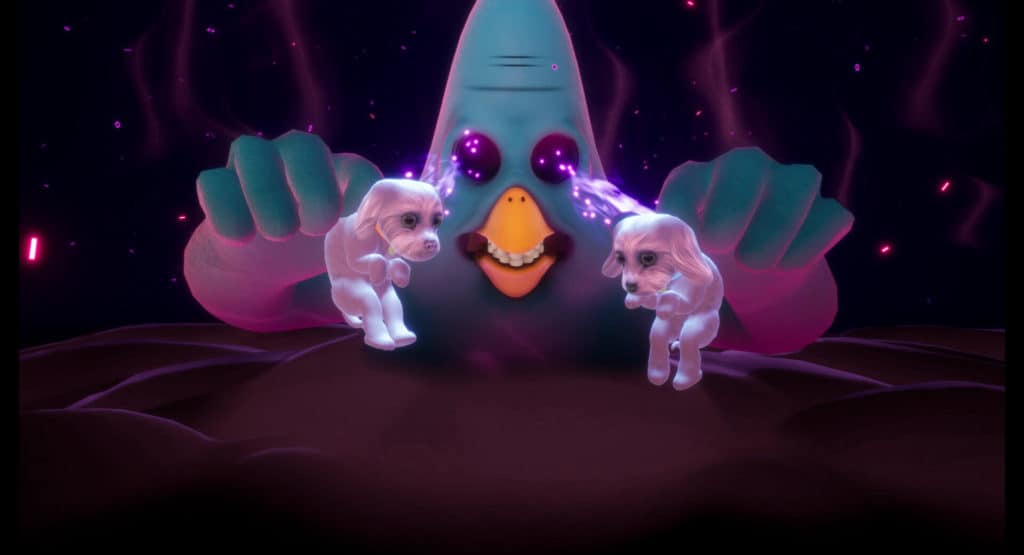 Like pretty much everyone else in the world, we’re huge fans of Rick and Morty. So when we found out that Justin Roiland, the show’s co-creator, was working on a comedic new VR sci-fi adventure game, we practically jizzed in our pants.

Trover Saves the Universe is being developed by Roiland’s own company, Squanch Games, and as you can see from the trailer, it’s packed with the same kind of dark, edgy humor which helped make Rick and Morty such a hit. The adventure takes place on a distant planet, and you play as a lazy extraterrestrial lifeform who likes to sit in his chair doing nothing all day. However, when your dogs are kidnapped by an evil bird-like monster named Glorkon, you’re forced to team up with Trovor, a sword-wielding, potty-mouthed purple blob alien, to deliver some vengeance in the style of John Wick. In the process of rescuing your beloved pooches from the talons of Glorkon, Trover also just might end up saving the universe, but you’ll have to play through the story yourself to see if this game really does live up to its title.

Gameplay will consist of a mixture of exploration and platforming, with combat also playing a role. Trovor will be using a weapon which looks suspiciously like a lightsaber to take down his foes, although it won’t be referred to as such due to obvious reasons. IGN were lucky enough to be able to play through an eight minute demo, so check out their preview if you want to see Trover Saves the Universe in action.

Roiland will be providing the voice of Trover as well as a number of other characters in the game, and hearing snippets of his voice work in the footage and trailers has us splitting our sides. We expect to be in hysterics when Trover Saves the Universe arrives on PS4, PSVR, and PC on May 31.