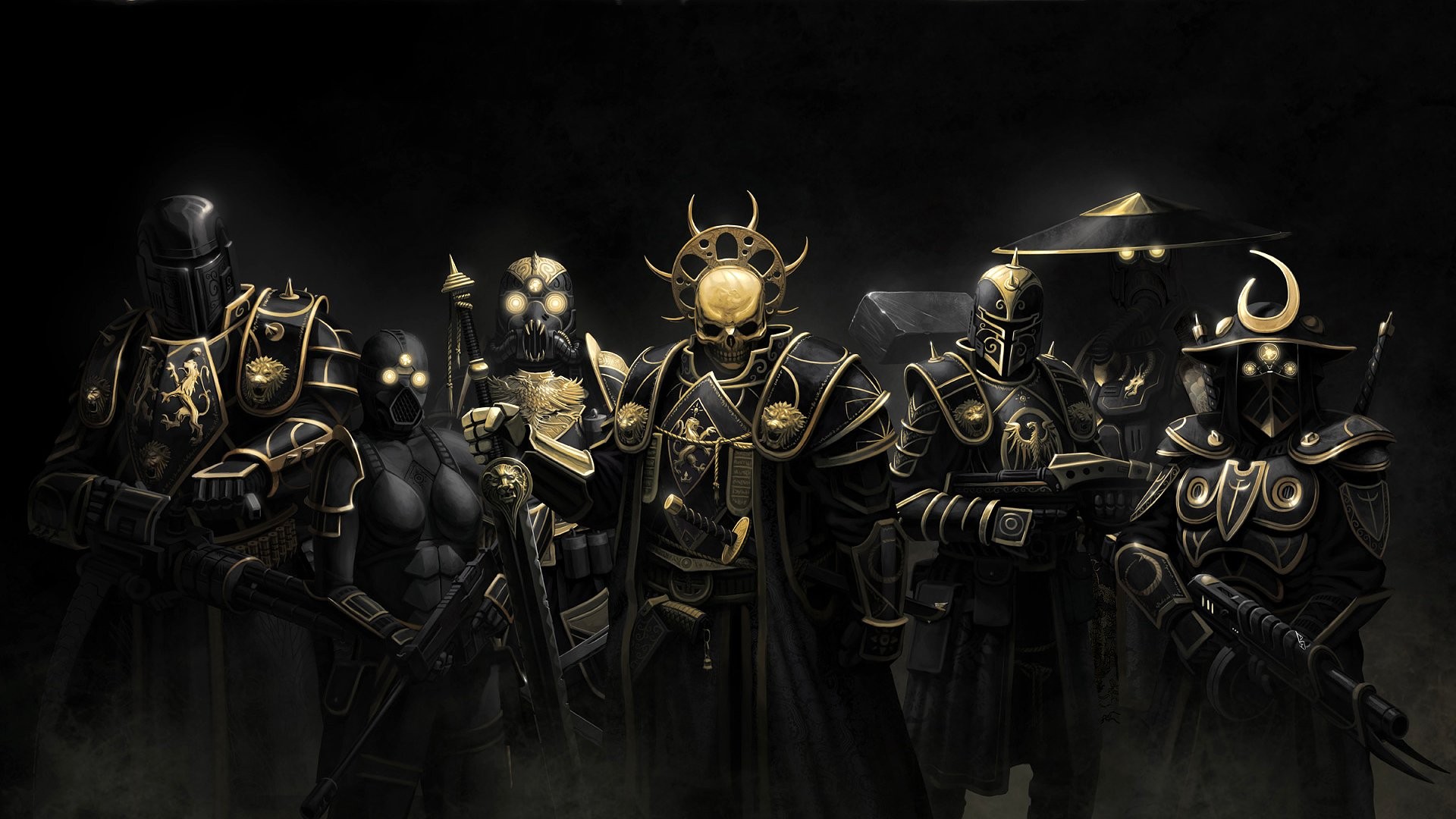 It Should Be a Movie: E.Ψ.Ǝ: Divine Cybermancy

Every futuristic movie seems to follow the exact same criteria. Flying cars, evil robots, you know the deal. From Johnny Mnemonic to the recent film Upgrade, I think we’ve all gotten a little blasé about the content of cyberpunk movies. Not that these are particularly bad movies, they just seem to be able to add anything new. Not only that, the more our world spirals into this technocratic hell, the less effective the themes of late capitalism and consumerism seem to be—indeed, now they are the norm. With the stagnation of the cyberpunk future film genre, it’s time to look for some outside influence. And as far as outsider art goes, I have the perfect centerpiece;  a little known game called E.Ψ.Ǝ: Divine Cybermancy.

E.Ψ.Ǝ: Divine Cybermancy takes place in a sci-fi world so far in the future it almost swings back into becoming dark high fantasy. To say the game takes place in a post-neo-meta-dystopian cyberpunk future does not do it justice. All the vestiges of humanity have been stripped away from civilization. Megacorporations have mercenaries fighting in perpetual war. All that remains are impossibly huge black buildings towing above vacant streets below, a virtual city straight out of the mind of Zdzisław Beksiński. The only color you will see comes from the occasional advertisements for various arms, drugs, or pornography. Oh, and there’s chaos demons that look like they’re made of play-dough entering reality through all this psychic energy or something. The wiki says that these are creatures created by the remnants of dead beings killed throughout the universe manifesting themselves through psi-energy called the “Meta-Streumic Force.” Don’t think too hard about it.

In E.Ψ.Ǝ: Divine Cybermancy the player takes the role of a super-advanced psychic cybermonk warrior within the ranks of the E.Ψ.Ǝ., itself a product of these megacorporations. E.Ψ.Ǝ is an ancient Illuminati-style organization, utilizing the most advanced technology—gene therapy, cybernetic upgrades, psychic training—to perform clandestine operations throughout this dystopian world. And by clandestine I mean massacring countless people with cyberbrain psi-blasts, compact miniguns in the shape of a micro uzi, or energy forcefield swords.

The story is basically incomprehensible. E.Ψ.Ǝ: Divine Cybermancy begins with the player waking up, severely injured and with no memory, after an ambush. You fight your way through some play-dough demons and soldiers and return to your divine cyber office to fill out some police reports, and report back to your mentor, who’s name is unknown, and the E.Ψ.Ǝ boss, Commander Rimanah. They explain to you that the two factions of E.Ψ.Ǝ—the knightly space marines known as the Culter Dei, and the samurai-y space marines called the Jian Shang Di—are in the midst of a civil war.

As a member of the Culter Dei, you have to… go out and kill some folks and demons I guess. To make matters worse you also find a recording of yourself telling yourself not to trust anyone but yourself. I don’t know. Not only is the story 10000% divine cyber nonsense, it’s also been amateurly translated from French. E.Ψ.Ǝ: Divine Cybermancy is an incomprehensible game, and yet with the right attitude, you can study it like Kabbalah. The structure of the game is also made so that to reach the true ending, you must beat the game four different times, making different decisions each time, eventually realizing that much of what you experienced is actually within the guilt-filled mind of Commander Rimanah. I think. Again, and I cannot stress this enough, this story is incomprehensible.

As if that weren’t ridiculous enough, the manner in which you play the game is also incomprehensible. There are dozens of stats, and half of them are meaningless. Mental balance, presumably, means that you are less likely to get your own brain hacked (yes, that happens), karma may have meant something at some point but there doesn’t seem to be a morality system, and suprahuman reflex (not a typo) appears to be nothing. As for the upgrades, the most overwhelmingly powerful part to upgrade is the cyberlegs, which at max level let you literally run and jump like superman. Just to give you another example of how backward this game is.

Now you may be wondering why I am describing this absolute monstrosity. That’s because E.Ψ.Ǝ: Divine Cybermancy is one of the most fascinating games, maybe ever. It is obtuse and opaque ridiculous and that is my shit. The setting is bizarre and unique and self aware; the broken spider tank from Ghost in the Shell can be found laying around, and the cyberdemon from Doom is a late-game enemy. The lore is techno-gibberish mashed with French translations, leading to nonsensical pop-ups that say “YOU GAIN BROUZOUF,” the in-game currency.

Needless to say, E.Ψ.Ǝ: Divine Cybermancy would be an incredible movie. I recently saw David Lynch’s Dune movie and could not help but think of how similar it is to E.Ψ.Ǝ: Divine Cybermancy. Dune is also about what humanity looks like tens of thousands of years from now. In Dune, warring space fiefdoms are vying for control of the planet Arrakis. This planet is home to a substance called Spice, which expands consciousness and allows for psychic abilities. So much so that if you take enough, you gain the ability to traverse the universe by “folding space.” Also, you become a brain in a jar.

Anyways I won’t spoil anything else because you should absolutely read if you haven’t already. But the parallels between it and E.Ψ.Ǝ: Divine Cybermancy are obvious. They both take place in a setting so abstract and advanced that humanity has ascended to a higher plane of existence. They both have themes of political strife and corporate conquest of the universe. And, at least with the Dune movie, both are aesthetically similar to a Beksinski painting.

Unfortunately, due to a number of production issues, David Lynch was not able to create the Dune movie to his true vision. In his capable hands, David Lynch could create a truly incredible movie based off of E.Ψ.Ǝ: Divine Cybermancy. With Dune, Lynch showed us just how well he can create an unsettling atmosphere in a futuristic setting. E.Ψ.Ǝ: Divine Cybermancy would take that atmosphere to the next level.

Not only is the future-gothic setting right up Lynch’s alley, but the bizarre cyclical structure of the game’s story is seen in Lynch’s work already, such as Mulholland Drive. Were I David Lynch, I would not change the story of an E.Ψ.Ǝ: Divine Cybermancy as much as possible. His movies typically focus on one specific emotional theme. E.Ψ.Ǝ: Divine Cybermancy explicitly focuses on the guilt of Commander Rimanah. And on top of that, the content of E.Ψ.Ǝ: Divine Cybermancy is a lot more intense and spectacular than that of the Dune movie. Sure, Dune may have castles and big worms, but E.Ψ.Ǝ: Divine Cybermancy has supersoldiers leaping 50 vertically to smash a cyberdemon with a nuclear fusion hammer, or sprinting invisible around a battlefield with a revolver known as the ‘bear killer, ’powerful enough to shoot down gunships in two or three shots.

There really is not much that needs imagining for an E.Ψ.Ǝ: Divine Cybermancy movie. The setting is gothic and disturbing, the lore is confusing, and the story is incomprehensible. And to top it all off, it’s about superhuman cyber monks. What else could you want in a film?  E.Ψ.Ǝ: Divine Cybermancy is such an incredible piece of outsider art that I believe it could revitalize the dystopian future genre. Move over Maze Runner, let some cybermonks have the stage (god what a terrible fucking way to end this article… c’mon Jesse, be better).