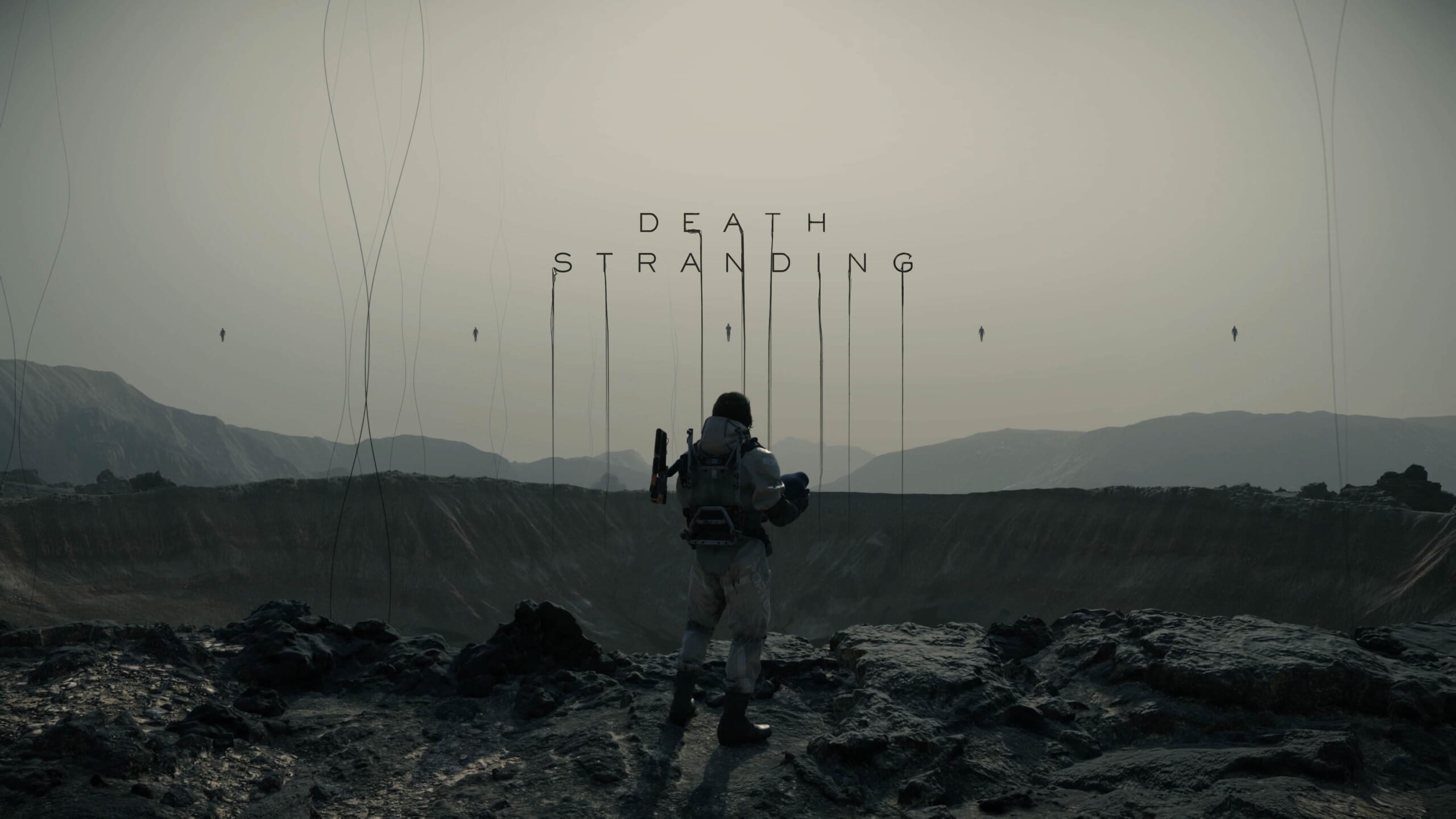 For years we have been fed little crumbs of Hideo Kojima’s latest project, Death Stranding. But unlike most games, the more information that was released, the less I seemed to know about the game. After four years of esoteric logos, strange gameplay clips, and a few truly bizarre trailers, Death Stranding has finally been unleashed on the public. As something of an apostle of Kojima’s work, I was beyond hyped to finally play this long awaited game. Now that I’ve experienced it, I’m not so sure it was the magnum opus I pictured it would be. I don’t even know if I have the mental capacity to judge accurately judge such an intricate and unusual world. The only thing I can confidently say about Death Stranding is that, well, it’s something.

In Death Stranding, you play as Sam Porter Bridges, a courier in the post-apocalyptic United States.There has been a Third Impact like cataclysmic event that smashed the world of the living and the world of the dead, an event known as, wait for it, the Death Stranding. Souls of the dead inhabit massive dead zones (ha) between the cities, undetectable to most humans, and should a regular person find themselves too close to one of these ghosts, they are consumed by a black tar and there is a massive explosion known as a voidout. Something about matter and antimatter. Not going to try and make sense of it. And so humanity has retreated into bunkers and walled cities, isolated from each other and more importantly, isolated from the USPS.

As cool as spending the rest of your life in an isolated bunker sounds to a goblin like me, there are those in the world of Death Stranding who disagree. The one you see the most is the Bridges Foundation, the remnants of the US government and Sam’s employer. As a Porter for Bridges, your job as Sam Porter Bridges is to reconnect the wifi of every bunker in the United Cities, and “make America whole again.”

Death Stranding is basically about a survivalist FedEx guy. Gameplay revolves around transporting packages from one location to the next. Sam straps a bunch of boxes to himself and then goes for a hike. For the most part, you will be balancing the supplies you need for the trip and weight you can carry. Too little and you may find yourself unable to climb a cliff or fix a box. Too much and you’ll be unbalanced, and the more you take the more unbalanced you are. The walking is a lot more involved than most games. You have to balance yourself as you travel, lest you fall on your ass. I frequently found myself taking a ton of supplies and then I would travel by doing the Charleston over rocky terrain until I tripped and spilled my cargo everywhere.

Combat in Death Stranding is minimal. At the beginning of the game, your armaments are few.If you’re caught by a ghost, there’s a chance you’ll have to fight a creature, and these creatures are weak to bodily fluids. For a large section of the game your only weapons are grenades filled with blood, piss, and shit. Not hyperbole. On top of that, even when you do get lethal weapons in order to fight box marauders, you can’t use them without their death causing a voidout. If you don’t dispose of the bodies in time, the voidout will turn the area into a crater. Suffice to say you don’t really want to be killing. Thankfully combat is kind of unbalanced, so I often found myself simply punching armed raiders and leaving the fight mostly unscathed.

The gameplay of Death Stranding is, unfortunately, often very clunky. Kojima has attempted to capture the feeling of real backpacking, but to transfer this into a game is not exactly exciting. I did learn to appreciate the walking through mostly empty terrain in the same way Wind Waker made me enjoy sailing through mostly empty ocean. When you’re not hiding from ghosts or sneaking around bandits, the cross-country hiking aspect of Death Stranding matched with the excellent soundtrack made the game very zen. But all too often, when you’re trying to cross a river with a full backpack or attempting to cross a mountain, walking is a little less fun. Death Stranding is an extremely slow game and too often it becomes tedious.

There is an interesting multiplayer aspect of Death Stranding. Well, multiplayer is a stretch. Basically, you and your fellow porters—other real life players—interact with each other while playing. Most notably is being able to build a number of structures to help make travel easier for the whole community. Little resource eating kiosks can be placed around and if enough people contribute, the kiosk will build you a bridge or safehouse. There’s also a communal box where players can leave excess cargo and supplies for other players to freely take, and you can leave signs a la Dark Souls soapstones.This sort of parallel multiplayer is always cool and make the world feel less lonely. Kojima stated that he wants the game to be a communal effort, and in that regard I think it does work.

Integrated with multiplayer is the Likes. Everything you do in Death Stranding is rewarded with Likes; a currency that means nothing. You may receive Likes for returning a lost package to a mailbox, constructing a useful bridge for other players to use, or simply for placing a sign that says “keep it up” whenever a player walks over it. And when you want to give other players Likes, you can actually give more than one. There’s a 5-10 second window in which you can smash that mf like button as many times as humanly possible. It’s almost a direct insult by Kojima to his own players, making fun of us for the addiction to that sweet sweet serotonin hit we get from getting a reply on an Instagram post. There is no reason to do any of this

But as with most of Kojima’s games, Death Stranding has an unbelievable amount of excess cutscenes and dialogue. You will see the same Norman Reedus pick up boxes and put down boxes and sit in bed and you will see a black Black Mask call you and tell you to pick up boxes and Guillermo Del Toro calling you to tell you to take boxes to fix your baby (of which you need for better box delivery) and god help you if you want to take multiple boxes out of the trunk of your car because you will see a cutscene for each one. This is not including the actual cinematic cutscenes, which are long, slow, and bizarre. And this is also not including the characters who call you up every five minutes to tell you you need to deliver more boxes.  And this is also not including the email, of which you’ll get hundreds of two page essays discussing the world (presumably giving some lore for me to understand but I don’t have time to read two hundred chapters of rambly mental diarrhea when I need this Death Stranding review done days ago).

Even this description of Death Stranding does not do justice to the world in which Kojima has created. There is a Dalíesque purgatory dimension known as the Beach, where massive quantities of dead whales and fish line an oily shore. Thunderstorms with rain that makes you rapidly age. Marauders who are so addicted to the euphoria that is delivering a box that they have gone mad, attacking any porter they come across to steal their stuff. Literally you have a living baby in a jar strapped to your chest. Sam goes through this world like you might go through a dream, where you see some completely nonsensical shit but your brain just accepts it as the reality that has always been.

Something that should be noted about Kojima is that everything is some kind of metaphor or literary motif or totem that we the audience are just too dumb to understand. For instance, rather than the standard earpiece radio to communicate, Sam is given a FitBit in the form of a set of handcuffs. Sure, the game tells us that its to represent the connectedness of humanity, but obviously there is a deeper meaning. Are we constrained by our isolation? Are we chained to society? Are we BDSM freaks with America? Who’s to say. Certainly not Kojima Dead whales, tar, umbilical cords, trilobites, hands, tears, life, death; so many objects are so weird and symbolic that you mind begins to disintegrate and starts to imagine everything has deeper meaning. Sam wearing shoes is an allegory for man’s rejection of nature. Sam drinks Monster™ Energy™ Beverages™ (also not hyperbole) because it is a deep parable about puberty. If Slavoj Zizek were exposed to Death Stranding he would turn into a being of pure energy like Dr. Manhattan.

The thing about Kojima is he has a good sense of humor. He knows that this is all fucking stupid and self referential, and that is by design. People in his games constantly remind you that you are playing a game (“Boss, press the action key to perform a takedown,” “Sam, unless you do ?????, that’s game over man!”). Irony is one of Kojima’s strong suits, and much of Death Stranding is intended to be as such. Unfortunately, making a game this thick in irony and symbolism makes the game a lot less fun. It can be argued that yes, Death Stranding is not supposed to be fun in the traditional sense. But then, why would your average player (who is presumably not studying their master’s thesis on schizophrenia) be compelled to play it?

Kojima is undeniably the world’s dumbest genius. Dumb because he does things no developer in the right mind would do, and genius because he does things no developer in their right mind would do. Death Stranding is a unique experience and I am happy to see what the madman was able to create without Konami’s influence. That said, this is more like a Henry Darger-esque art piece than a videogame. I absolutely think this is a great game because of its experimental style, not to mention its incredible cast, masterful development, and incredible design. But unfortunately, it’s also kind of shitty because it’s extremely slow and clunky mechanics and pacing, and these are really important for a video game. Death Stranding is a bold new step for the walking simulator genre, and people who like to interpret the artistic and literary value of their media will love it. But obviously this game is not for the majority of gamers.