Metamorphosis was on my list ever since it was announced. A Franz Kafka story turned into a game? Sign me up. A lot of people throw around the word “Kafkaesque,” to simply mean weird. To use a real Kafka story, well. That’s something else entirely. I had hoped that Metamorphosis would not only live up to the original short story but also build upon it in creative ways. Indeed, in some respects it kind of did. But, perhaps due to lack of time or resources, I don’t feel like developer Ovid Works were able to reach their vision.

For those who haven’t read the original Metamorphosis, I’ll give you a short summary. So spoiler alert, I guess. The story follows a salesman named Gregor Samsa, who awakens to find he is transformed into a bug. His family is terrified, he doesn’t know what to do, so he hides in his room. His family feeds him and whatnot at first, but eventually, they grow to resent his presence in the house, being a drain on their already dwindling money. The father throws an apple and gets stuck in his chitinous shell, causing an infection. Gregor eventually stops eating out of despair and dies from starvation and the rotting apple. The family is saddened, but relieved Gregor is done and they can live their lives again.

Metamorphosis is not all too much like the original story. Gregor becomes a bug, and that’s about the end of the narrative parallels between the short story and the game. And rightfully so, a Metamorphosis game where you sit in misery inside your bedroom for weeks without leaving until you die would not be all too interesting. In the game, however, Gregor goes through an Alice in Wonderland style transformation, walking down a colorful mushroom filled corridor, emerging inside his friend Josef’s room just in to see him getting arrested, and himself a tiny bug.

The narrative for Metamorphosis follows both you and Josef, both imprisoned under mysterious circumstances. Josef is arrested without being told why, and Gregor, obviously, is a bug. These two storylines are intertwined throughout, albeit your’s a lot more interesting. You are helping Josef behind the scenes, while also searching for a mysterious entity known as The Tower. I can’t really offer much more explanation than that, not just because it’s a short game, but because there isn’t really that much there.

The most important parts of the original Metamorphosis were in the deeper reading of the story. Gregor Samsa works nonstop to provide for his family, and his transformation is symbolic of how isolated he is in the world. How the structures of our society atomize everyone in it, turning a community into innumerable individuals who are all fighting against each other and themselves. Perhaps on some level the Metamorphosis game includes this as well, as The Tower and its endless bureaucratic intricacies are surely commenting on something. Perhaps even those same themes? But if they do exist, I certainly didn’t notice anything beyond “bureaucracy is dumb and meaningless and allows for the abuse of power.” Which, yknow, is certainly true.

There are a lot of things with the Metamorphosis story that leave the game feeling unfinished. There are a ton of cool ideas and a number of fascinating characters introduced, but unfortunately, many of them are not given the importance in the story they deserve. For instance, there’s a scene where you are working with the boss of a bug club. He offers to do you a favor, and once complete, he states that sometime he will be asking for that favor in return. But he does not. There’s mention of an anti-Tower cult, which has almost no appearance in the story. Metamorphosis has like five of these red herrings. They suggest that something big is just around the corner, and I kept waiting for that something right up until the end.

On top of that, there is no branching dialogue, no choices to be made. Metamorphosis is just Gregor going from person to person trying to figure out what the hell is going on. The dialogue is admittedly pretty interesting, but it really could have used some more involvement. There are so many bugs that you talk to, being able to ask them for more information about the world around them would be a lot better. Same with collectible notes or something. Disappointing, but ultimately not a huge dealbreaker.

Perhaps it wouldn’t be such a bother to me if the early trailers were a bit more accurate. This one, for example, not only has a bug that speaks pretty articulately but also a human invades upon the bug world. Neither of those things comes into play within the game and my assumption that the setting would be closer to The Borrowers. I hoped for big bug cities existing right alongside the human world (and admittedly there are a few), but in reality, the game is more like Alice: Madness Returns. Time and space seem to have no bearing on the locations you visit, and while this is cool, it gives Metamorphosis a more disjointed feel.

But my opinion on the story isn’t all too important. It is, of course, just my opinion. Metamorphosis is still a great concept, and for what it is, I’d say it’s well-executed. There is no combat in Metamorphosis, and there isn’t much more gameplay than some light platforming. The platforming elements are not all too complex, and most of the time my issues lay with simply trying to find out where I’m supposed to go next.

There are a couple of extra gameplay mechanics. The first is sticky feet, wherein Gregor can walk through ink or honey and then briefly gains the ability to walk up and down walls. Useful for some platforming, not that interesting. And the other mechanic allows you to get a bird’s eye view of the area in order to find out where to go next (and admire the scenery). I vaguely recall you gaining some kind of bug powers or bug equipment in early descriptions, but all that was dropped Beyond that, Metamorphosis is just about enjoying the ride.

Metamorphosis does have a very enjoyable ride. There are some elements of The Borrowers that I’d hoped for earlier, and they were very impressive. Skittling back and forth among a desk, attempting to work a gramophone as a bug, stuff like that was neat. Better still were the bug settlements within the bug dimension. Cities made of trash and other discarded objects, reminiscent of A Bug’s Life, were fantastic. I wouldn’t say I was a fan of the bug astral plane that teleports you around by means of floating objects, but I do appreciate the creativity and it did look great.

The ultimate disappointment of Metamorphosis comes from knowing what could have been. The novels of Kafka are so fascinating and bizarre, that given the creative freedom, Ovid Works could have made something transcendent. Using the most well known of his stories, and the premise to gain attention, but then  mixing in the other great narratives from Kafka’s works. Before the Law or A Message from the Emperor or a hundred other writings follow suit with the narrative for the Metamorphosis game. There’s so much potential here, and I really want to love the game. But without enough content, it falls flat.

There is a lot to love here. Metamorphosis is a great concept, and I’m not just saying that because they gave me socks with bugs on them at PAX (they were handing them out to everyone, this isn’t journalistic malpractice). It’s a unique walking simulator in that you use six legs instead of four. But the game felt rushed and was far too short for the $25 price tag. Clocking in at about 2.5 hours, that’s $10/hr for a game that does not feel whole. I can definitely see this title being a huge hit with the speedrunning community For the rest of us, you can get far more bang for your buck on any number of similar titles. Perhaps there will be expansions or even a more thorough sequel, but right now I can’t in good conscience recommend the game. 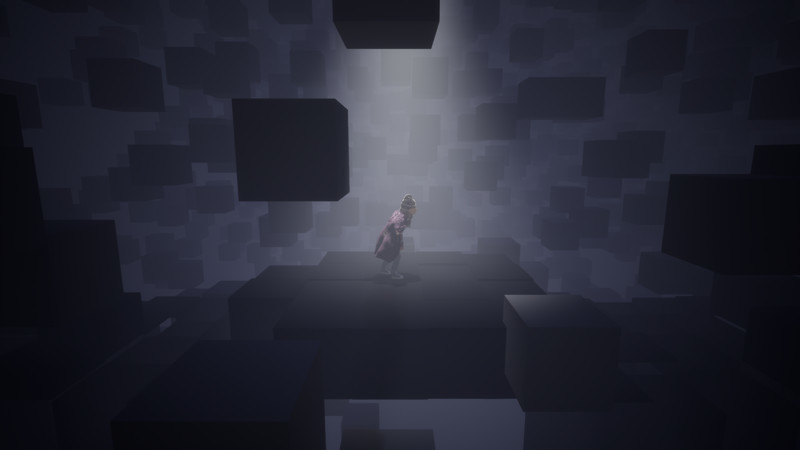 Face Your Own Thoughts In Puzzle-Platformer Memories Of Fireflies